Our current political polarization can feel new, but it has a long cultural history. Two dominant visions of American identity have historically been in tension and at times outright competition with one another: pluralism and exclusion.

On the one hand, the first vision understands the United States as a country built on a commitment to pluralism, where anyone, from anywhere, can be American. As people fled religious persecution, the US as a nation of immigrants provided many a home where diverse religious and political views and backgrounds could co-exist. In this broad sense, the country affirms its society is a land of others. These ideals laid out by the Framers of the Constitution have over the centuries been invoked by groups marginalized by race, religion, and immigrant backgrounds to argue for a more inclusive, representative American democracy.

On the other hand, the exclusionary vision of American society has emphasized that American identity–and all the idealized or normative standards that entails (e.g., race, gender)–is not available to all. Historically, what it means to be American has been exclusively available to white people – white men in particular – with European ancestry, both in how people imagine American identity and how law has enforced boundaries of citizenship. For example, when Asian Americans and Latino Americans made legal claims for citizenship in the 19th and early 20th century, they were forced to argue that they fit either ‘white’ or ‘black’ definitions of citizenship. Both during this period and since, citizenship held by immigrants and/or racialized minorities is insufficient to be considered “American.”

Given this tension between a cultural value for pluralism and narrow notions of American identity, how does the public understand what it means to be “truly American” and are these views changing?

Since 2015, PRRI has asked questions about the hard boundaries of American identity on four occasions. This battery of questions assesses how important the following factors are to being “truly” American: being a Christian, being born in America, being able to speak English, and believing in God. Since 2018, PRRI has included a question about whether being of European heritage is important to being “truly” American. 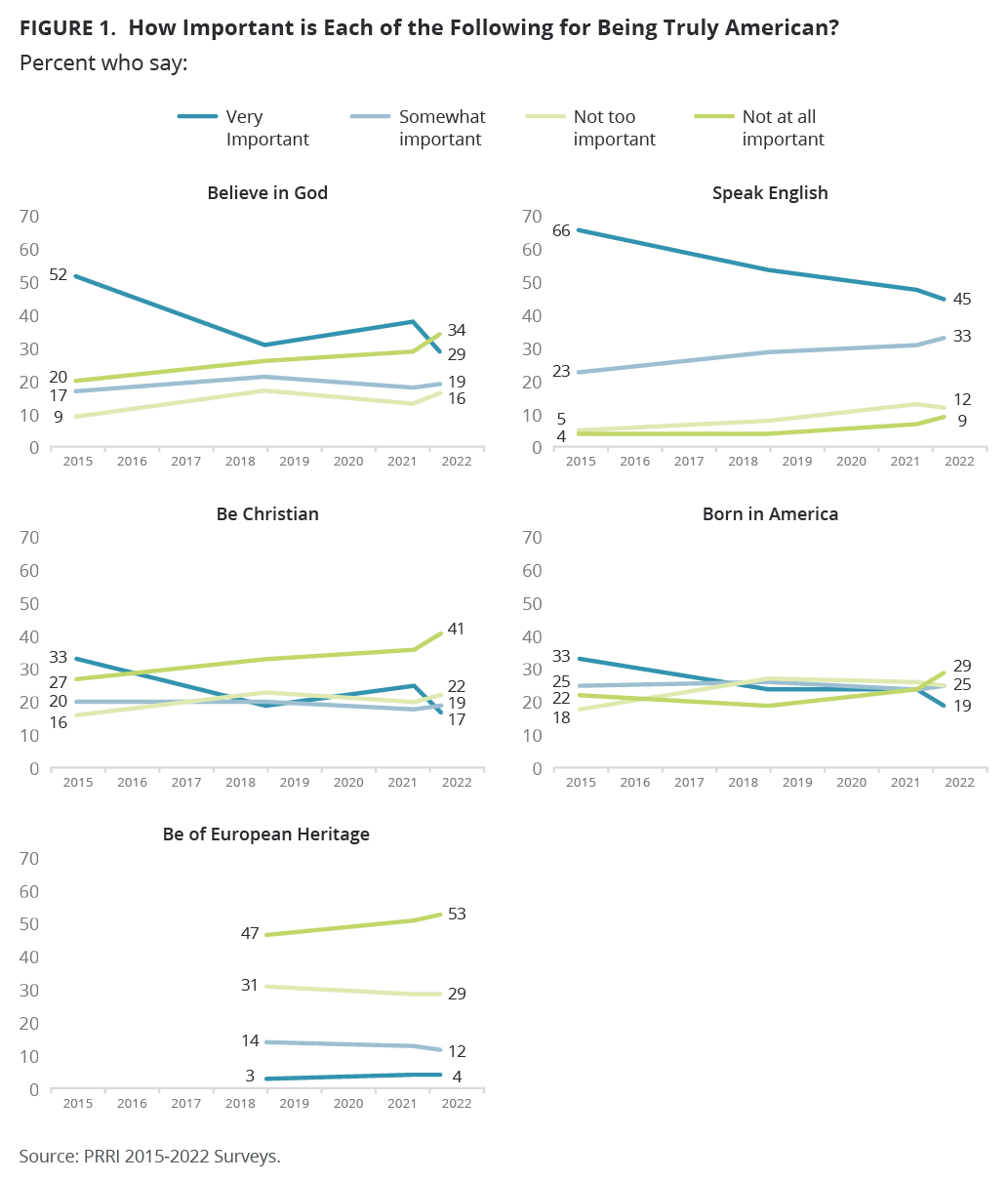 Our analysis has several takeaways. First, belief in these hard boundaries of what it means to be “truly American” has decreased over time. We see declining proportions of people who think each item is “very important.” In particular, Americans’ belief that being a Christian, believing in God, and being born in America are what makes someone truly American has declined markedly (though, on average Americans acknowledge these are between “not too important” and “somewhat important”).

Second, most Americans place the greatest importance on English language skills as the most important factor of the five posed to being truly American, whereas being of European heritage is the least important of the five factors.

Finally, while these trends suggest slight movement toward inclusion, they also show that many people still believe that religious identities and beliefs, language, and place of birth dictate who counts as a true American to some degree. Rates of moderate agreement with these questions are more stable over time.

Together, this snapshot suggests that the tension between the pluralist and exclusionary traditions endure. While the over time trend suggests a move towards a more pluralist vision, the majority of Americans still believe that these hard boundaries of American identity and the exclusionary vision that they support define what it means to be a true American.

Today, some Americans believe that speaking English and holding particular kinds of religious beliefs are central to American identity. These beliefs are tied to citizenship and denied to religious minorities. National political rhetoric often underscores the reality of this vision of America. National identity is regularly invoked in American politics, often to turn public opinion away from progressive  immigration policies. Politicians regularly contrast American citizens with immigrants, arguing that their cultures and religions are incompatible with American values and that they will never be “true Americans.” Research also shows that people do not always choose a pluralist or an exclusive vision of American society – their attitudes toward different social groups often combine parts of both visions.