Favorable views of Trump remain essentially unchanged across many demographic groups since May 2020. Some groups, however, have become notably less likely to view Trump favorably than they did throughout 2019. For example, Trump’s favorability has dipped significantly among women (from 35% to 30%) and Americans living in battleground states (from 43% to 35%). Notably, favorability of Trump has dropped significantly among white Americans overall (from 49% to 43%) and among a number of important white subgroups, including white women (from 42% to 35%), white Christians overall (from 54% to 47%), white Catholics (from 49% to 36%), and white Americans with a four-year college degree (42% to 29%). 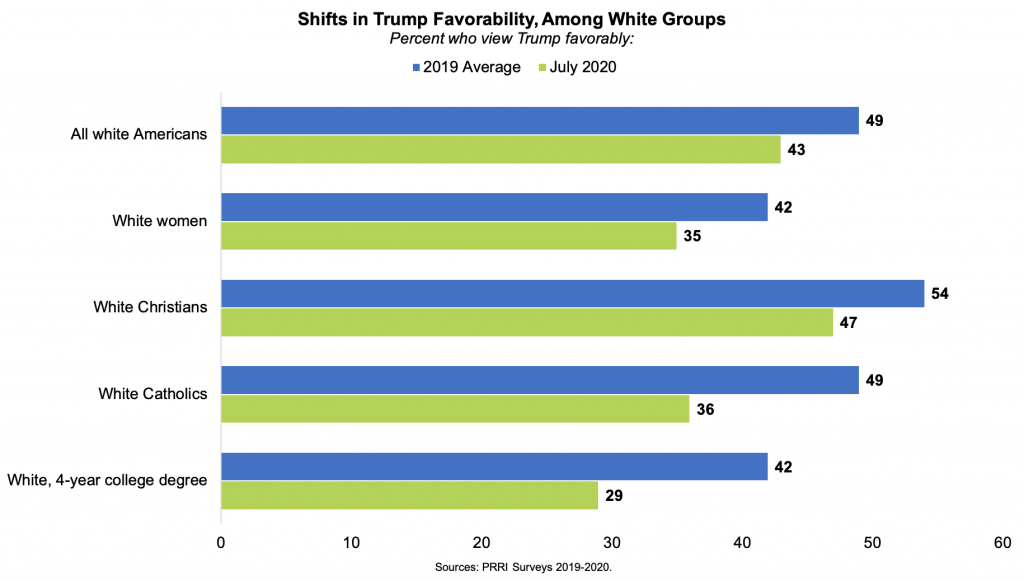 More than eight in ten (84%) Republicans hold favorable views of Trump, similar to 83% in May, and down from 90% in April and 89% in March. However, Republicans are more likely to report favorable views of the president now than throughout 2019 (79%). Among independents, 36% hold a favorable view of Trump, unchanged from May (35%) or their 2019 average (37%), but down from 43% in April and 45% in March. Democrats have shown significant movement since May. The proportion viewing Trump favorably has declined by half in July (7%), compared to May (14%), and is also around half of the president’s 2019 average favorability among Democrats (15%). This is near Trump’s previous low among Democrats in September 2018 (6%). 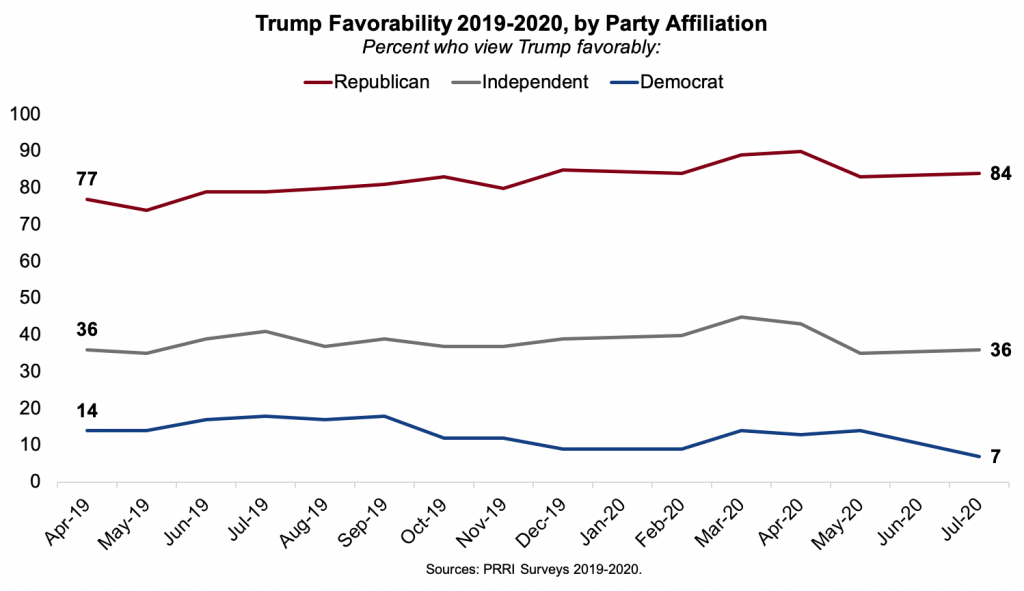 Among all white Christians, less than half (47%) hold favorable views of Trump, compared to a slim majority (52%) in May, although the difference is not statistically significant. However, the percentage of white Christians viewing the president favorably has declined significantly from their 2019 average (54%). That change is mostly driven by white Catholics and a modest, but not significant, decline among white mainline Protestants (48% throughout 2019 to 41%). Notably, there are stark differences between the views of white Christian subgroups and white religiously unaffiliated Americans, among whom only 29% hold a favorable view of Trump. 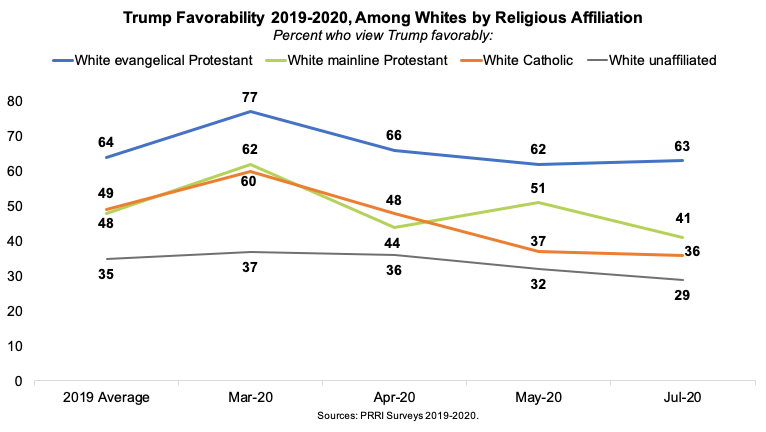 Among white Americans without a four-year college degree, views of Trump have not substantially changed since May or from 2019 levels (51% today vs. 47% in May and 52% in 2019). By contrast, among white Americans with a four-year college degree, favorable views of the president have declined by more than 15 percentage points from May (29% today vs. 45% in May) and are also significantly lower than throughout 2019 (42%). 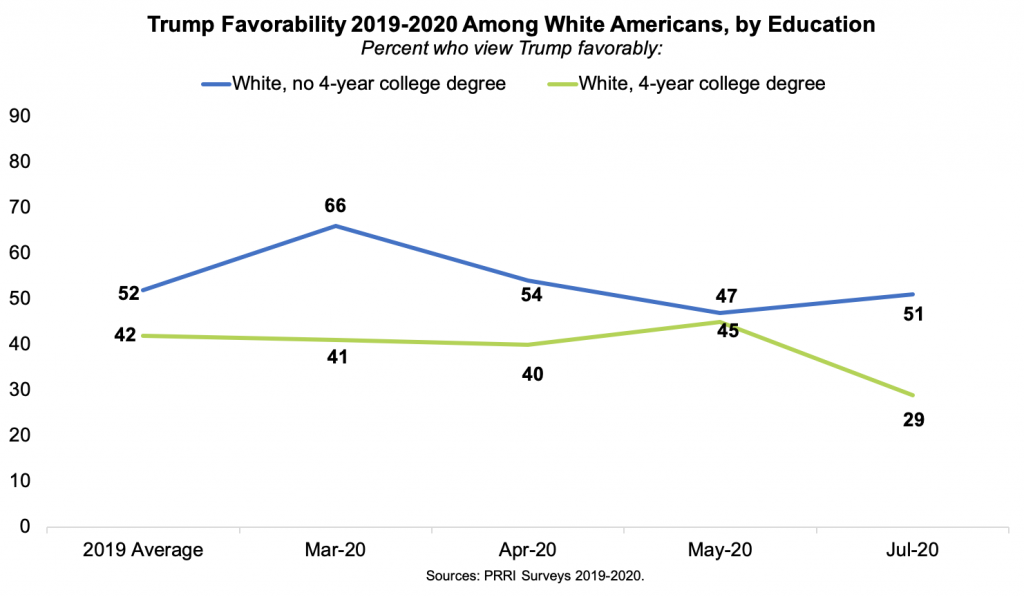 Trump continues to have worse ratings among younger Americans than older Americans, with a notable break around age 50. Among those ages 18-29, only 35% view the president favorably, and in the 30-49 age group, only 31% view Trump favorably. His numbers improve a bit among those ages 50-64 (42% favorable), and among those 65 and over (47% favorable).

Americans are generally more positive toward the former vice president and presumptive Democratic presidential nominee Joe Biden, but they remain divided, with 48% holding a favorable view and 45% holding an unfavorable view of Trump’s competitor. This is unchanged since PRRI last asked the question in September 2019, when 48% viewed Biden favorably and 45% unfavorably. 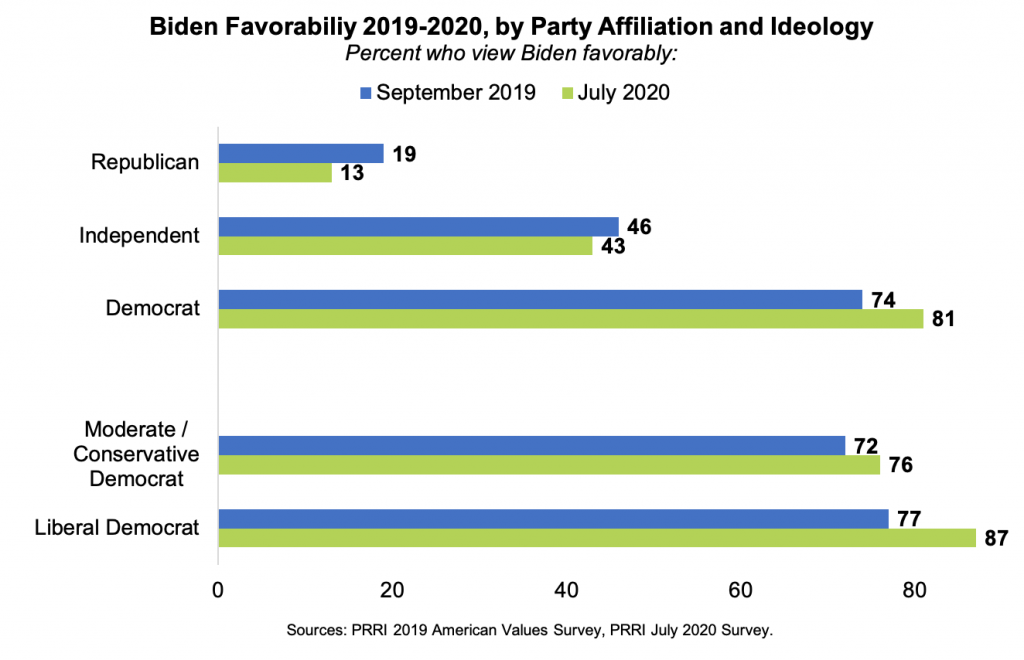 Religiously unaffiliated Americans (57%) and nonwhite Protestants (57%) are more likely to express favorable views of Biden than white Christian groups (39%). Less than half of white mainline Protestants (49%), white Catholics (40%), and white evangelical Protestants (29%) view the former vice president favorably. No religious group has significantly changed their views of Biden since 2019.

There are substantial gaps by gender and education among white Americans. Among all Americans, 53% of women and 42% of men hold favorable views of the former vice president. The gap widens among white Americans. A slim majority (52%) of white women, compared to only 36% of white men, hold favorable views of Biden. There was no significant gender gap between white women and white men in 2019 (44% vs. 42%, respectively). 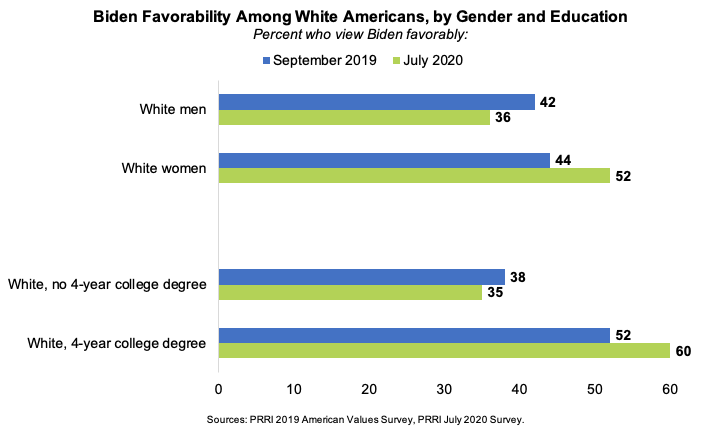 Biden fares slightly better with older Americans than younger age groups, although none of the differences are statistically significant. About four in ten (42%) of those ages 18-29, compared to approximately half of those ages 30-49 (50%), 50-64 (50%), and 65 and over (47%), view the former vice president favorably. These numbers have not significantly changed since 2019 for any age group.

There are no statistically significant differences in Biden’s favorability by party lean or battleground status of the states. In the states that were hotly contested battlegrounds in 2016, almost half (49%) of residents hold favorable views of Biden. That ticks up to half (50%) holding favorable views of the former vice president in Democratic and Democratic-leaning states. In Republican and Republican-leaning states, 44% view Biden favorably. These numbers do not shift if only current 2020 battlegrounds (Arizona, Georgia, North Carolina, and Florida) are used.

With less than four months until the November election, Biden appears well situated in comparison to Trump. Among key white subgroups that anchored Trump’s win in 2016, Trump is viewed more favorably than Biden, including among white men (51% compared to 36%), white Americans without four-year college degrees (51% compared to 35%), and white evangelical Protestants (63% compared to 29%). 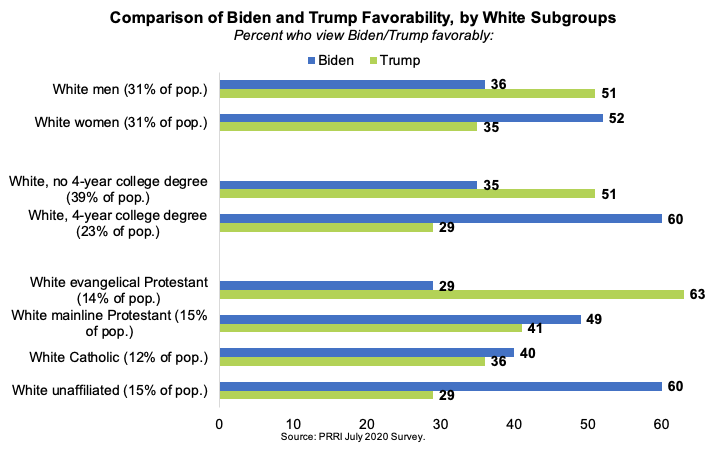 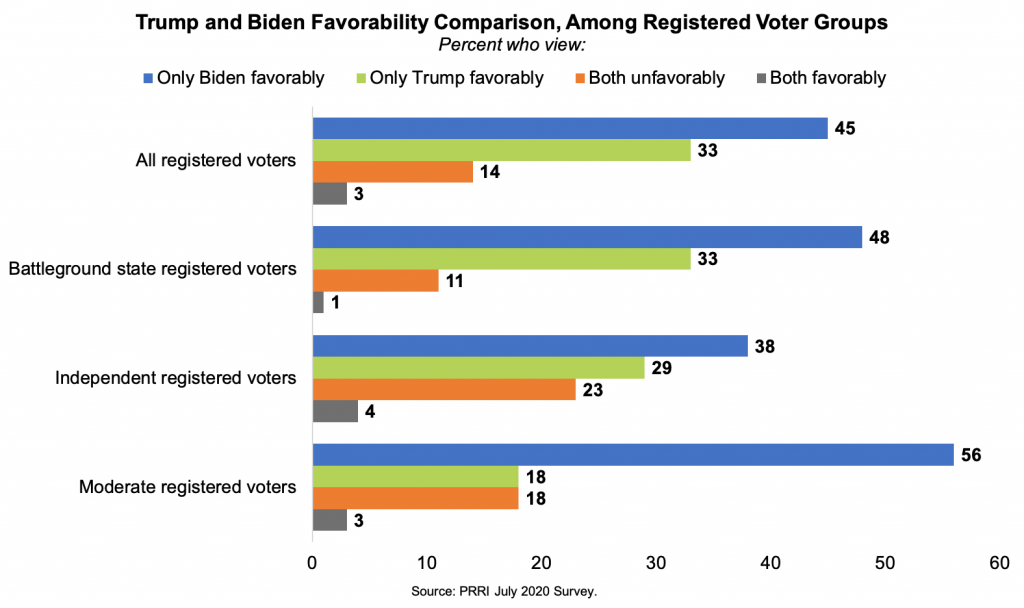 The survey was designed and conducted by PRRI. Results of the survey are based on bilingual (Spanish and English) RDD telephone interviews conducted between July 7 and July 12, 2020, by professional interviewers under the direction of SSRS. Interviews were conducted among a random sample of 1,000 adults 18 years of age or older living in the United States (701 respondents were interviewed on a cell phone). The margin of error for the survey is +/- 3.5 percentage points at the 95% level of confidence, which includes the design effect for the survey of 1.3.

[2] Battleground states are Arizona, Florida, Michigan, North Carolina, Pennsylvania, and Wisconsin. These states are listed in the “Toss-up” category by Cook Political Report, as of March 9th. These were the six closest races in 2016. The Cook battlegrounds were updated to only include Arizona, Georgia, Florida, and North Carolina in July, with Michigan, Pennsylvania, and Wisconsin moving to the “lean Democrat” column. Making these changes does not change the numbers above in statistically significant ways, therefore we have kept the original 6 battlegrounds as the closest 2016 states.