New data from PRRI shows that President Donald Trump’s favorability rating has dropped seven points over the last four weeks. Today, just over four in ten (43%) Americans hold mostly or very favorable views of Trump, compared to a 54% majority who hold mostly or very unfavorable views of him. In mid-March, Trump’s favorable rating was 49%, the highest at any point since 2015, and the first time in PRRI polling that Americans have been more likely to say they have a favorable than the unfavorable view (46%). 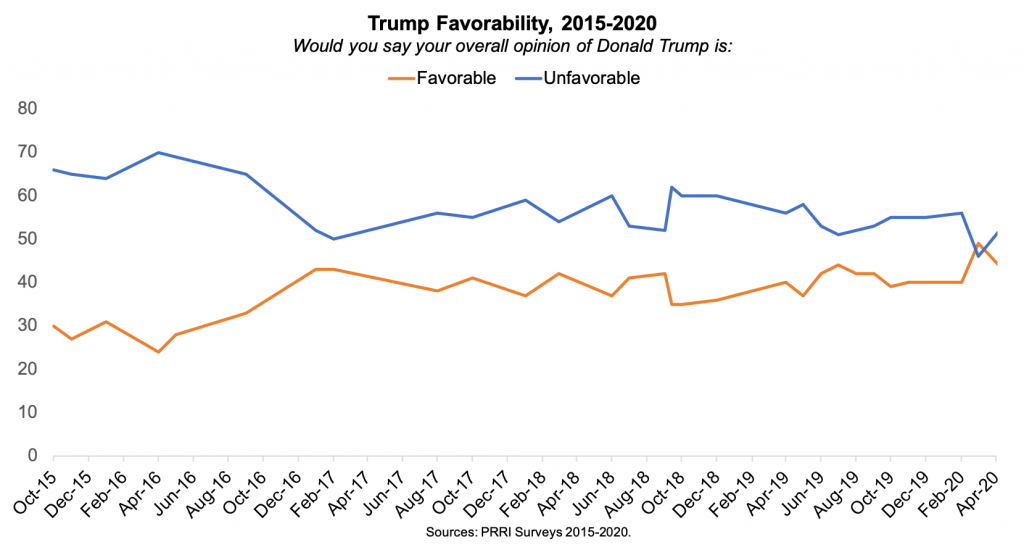 Trump’s favorability levels are not significantly different within partisan groups based on the number of coronavirus cases per capita. In counties with the top 50% of coronavirus cases, Trump’s favorability ratings by party are similar to the national rating by party, with 92% of Republicans, 42% of independents, and 12% of Democrats holding favorable views of Trump. 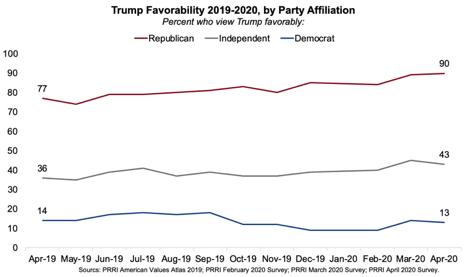 Trump’s favorability ratings have retreated back to 2019 levels among most demographic groups, with a few exceptions. Currently, two-thirds (66%) of white evangelical Protestants, nearly half (48%) of white Catholics, and 44% of white mainline Protestants hold a favorable view of Trump, a significant decline from their March 2020 ratings (77%, 60%, and 62%, respectively). Among nonwhite Protestants, Trump’s favorability ratings have not significantly changed (from 40% in March to 36% in April 2020).[3] The same is true for religiously unaffiliated Americans. Nearly four in ten (37%) religiously unaffiliated Americans express favorable views of Trump, and these numbers have not changed notably since 2019. 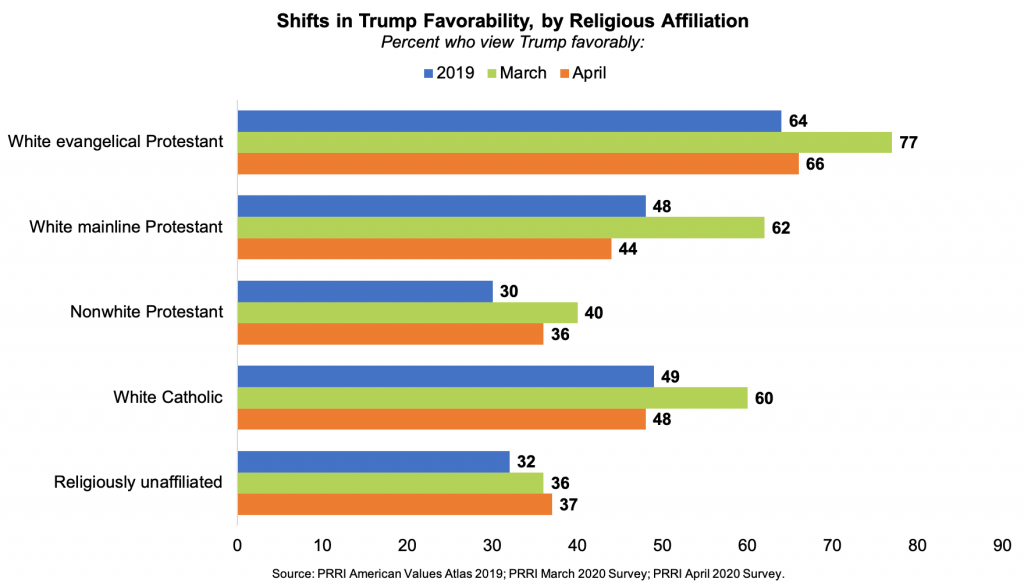 A wide gender gap persists, with men much more likely than women to hold favorable views of Trump (51% vs. 37%), a gap that remains largely unchanged since March. Also, while favorability levels did not decline significantly among white men (63% in March to 56% in April), the decline is significant among white women, from 51% in March to 42% in April. 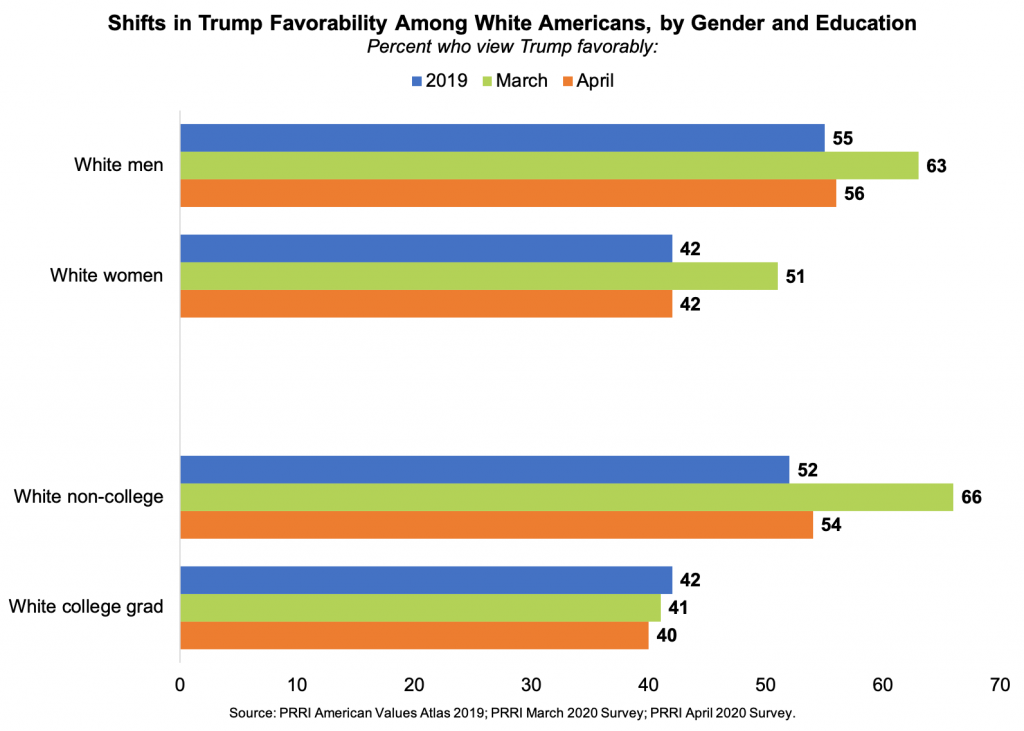 Among age cohorts, seniors (ages 65 and over) stand out. Trump favorability among seniors has declined from 56% in March to 42% in April. Changes between March and April numbers for those ages 18-29, 30-49, and 50-64 are not statistically significant.

Trump’s favorability in battleground states has dropped substantially since March, from 53% to 38%.[5]The president’s favorability in Democratic-leaning and Republican-leaning states has not significantly changed. About four in ten Americans in Democratic-leaning states hold favorable views of Trump now (41%) and in March (40%), although this is a notable improvement for Trump in these states compared to 2019 (35%). Half (50%) of Americans in Republican and Republican-leaning states view Trump favorably, a marginal drop from 56% in March and a slight increase from 2019 (46%), although the differences are not statistically significant. 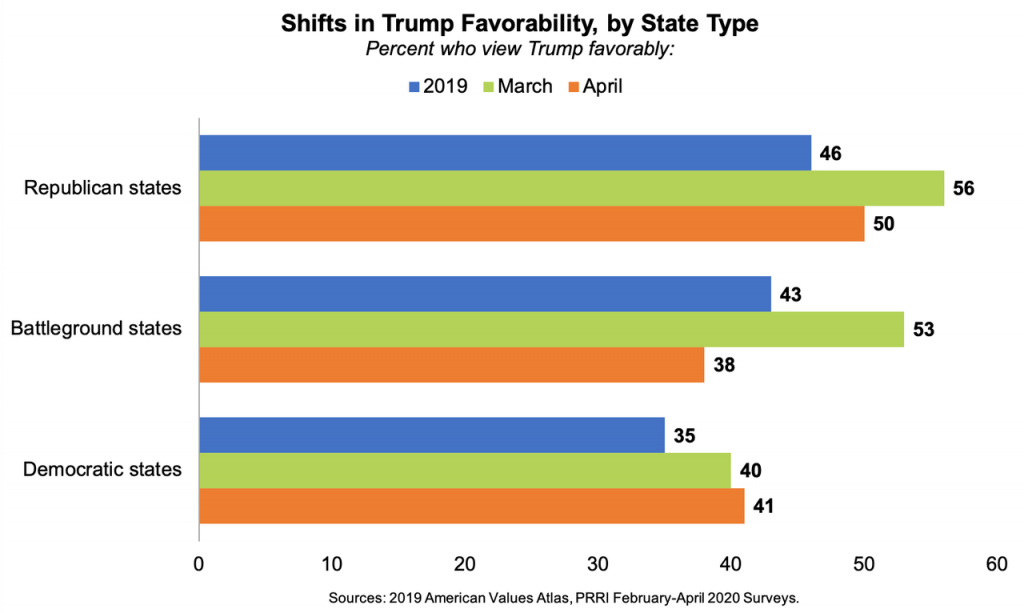 In areas with higher numbers of COVID-19 cases per capita, about half (49%) of Americans in Republican-leaning states view Trump favorably compared to about four in ten Americans in Democratic-leaning (40%) and battleground (36%) states. For all three types of states, Trump’s favorability in these counties with higher counts of COVID-19 cases closely resembles his favorability overall.

Largest Declines in Favorability Among Trump Base Groups 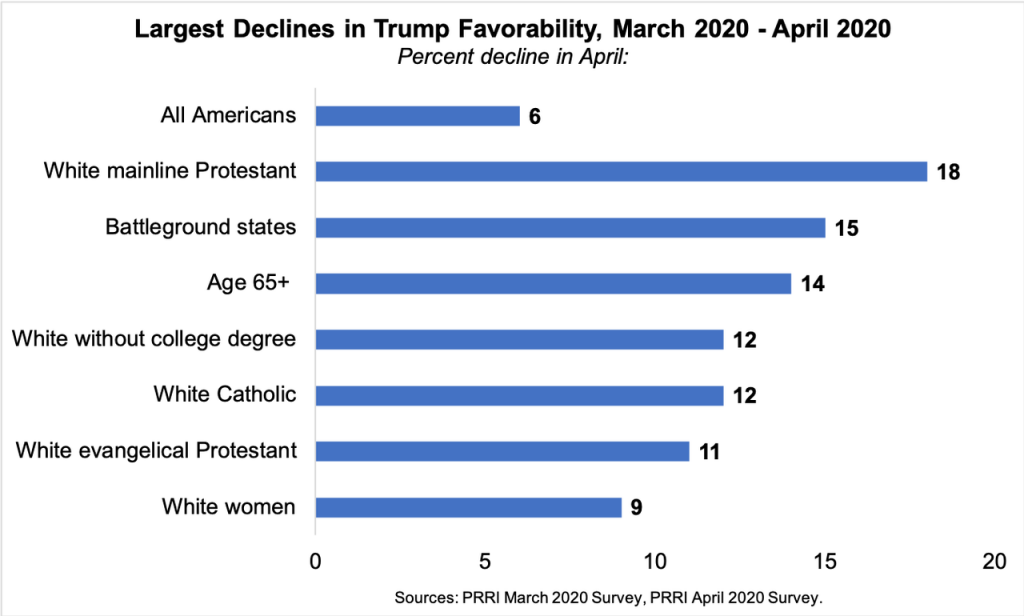 The survey was designed and conducted by PRRI. Results of the survey are based on bilingual (Spanish and English) RDD telephone interviews conducted between April 21 and April 26, 2020, by professional interviewers under the direction of SSRS. Interviews were conducted among a random sample of 1,008 adults 18 years of age or older living in the United States (704 respondents were interviewed on a cell phone). The margin of error for the survey is +/- 3.5 percentage points at the 95% level of confidence, which includes the design effect for the survey of 1.3.

[1]Coronavirus data comes from the Centers for Disease Control and Prevention (CDC). Cases include both confirmed and presumptive positive cases of COVID-19 reported to CDC or tested at CDC, with the exception of testing results for persons repatriated to the United States from Wuhan, China and Japan. https://www.cdc.gov/coronavirus/2019-ncov/cases-updates/previouscases.html

[3]The sample size for nonwhite Protestants is n=99.

[4] Sample size among black Americans is less than 100 (n=92 for March and n=79 for April); results should be interpreted with some caution.

[5]Battleground states are Arizona, Florida, Michigan, North Carolina, Pennsylvania, and Wisconsin. These states are listed in the “Toss-up” category by Cook Political Report, as of March 9th. https://cookpolitical.com/sites/default/files/2020-03/EC%20030920.4.pdf

[6]March favorability for college graduates in battleground states is not included due to small sample size.