On Sept. 15, the world celebrates the International Day of Democracy. In the past decade, the democracy score of the United States fell by 14 points, according to Freedom House measures. Freedom House cited several developments in late 2020 and early 2021 that contributed to this decline, including continuous rhetoric by supporters of former President Donald Trump who believe that the 2020 election was stolen and related attempts to overturn the election, which culminated in the Jan. 6 attack on the U.S. Capitol. Moreover, growing extremism and political polarization, as well as conspiracies such as the QAnon movement, have contributed to the erosion of U.S. Democracy.

In the aftermath of Jan. 6, a survey by PRRI asked respondents who they believed to be responsible for the violent actions of the rioters who took over the U.S. Capitol. The survey revealed that most Americans place blame on white supremacist groups (59%), Donald Trump (56%), and conservative media platforms (55%). However, Republicans were notably less likely to attribute blame to these three sources (30%, 15%, and 27%, respectively) than were Democrats (83%, 89%, and 78%) and independents (59%, 57%, 55% and respectively). The numbers were even lower among Republicans who most trust far-right news sources (17%, 3%, 15%, respectively). 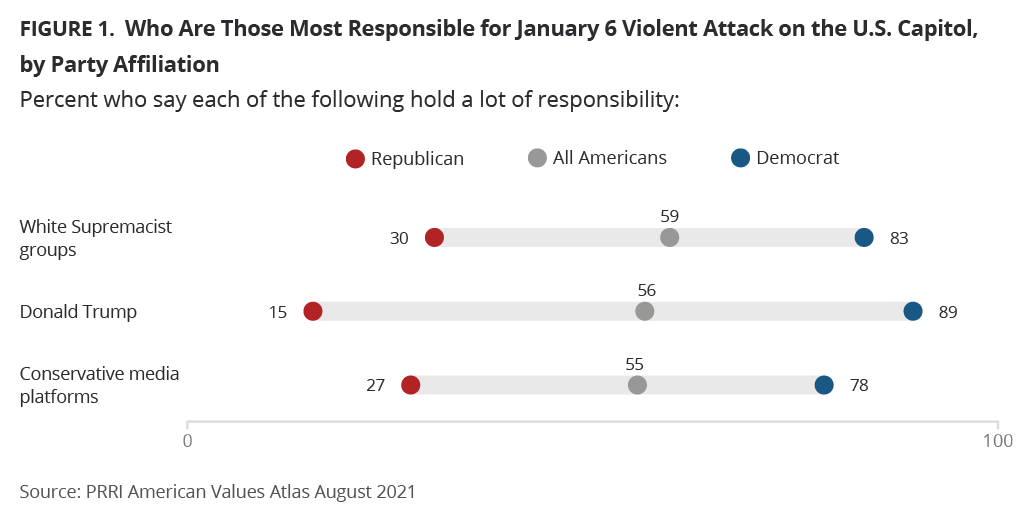 Throughout 2021 and 2022, PRRI has asked Americans to what extent they agree with the statement “The 2020 election was stolen from Donald Trump,” also known as the “Big Lie.” Again, a PRRI survey from March 2022 reveals pronounced party differences. While three in ten Americans (30%) agree that the election was stolen from Trump, Republicans (65%) are more than twice as likely to agree. By contrast, most independents (72%) and Democrats (94%) don’t believe that the election was stolen. The same survey also asked to what extent Americans agree that “Because things have gotten so far off track, true American patriots may have to resort to violence in order to save our country.” While only about one in five Americans (19%) agree with this statement, Republicans (31%) are significantly more likely to agree than Democrats (11%) and independents (17%).

In fact, PRRI has used the above statement about political violence as part of a battery of questions to investigate how widely Americans believe the main tenets of the QAnon movement,[1] which involves a number of conspiracy theories about politicians, celebrities, bankers, and the media, and revolves around the idea that Satan-worshiping pedophiles are plotting against Trump and that a coming “storm” will clear out these evil forces. PRRI data reveals that the percentage of Americans who hold QAnon beliefs has risen from 14% to 18% since 2021 and that Republicans are more than twice as likely as Democrats to hold these beliefs (26% vs. 10%). Moreover, in the wake of the Jan. 6 insurrection, PRRI discovered that even though only 9% of Americans said that it might be necessary to commit an act of violence to save the country, Republicans are again more than twice as likely as Democrats to justify the use of violence (13% vs. 6%). 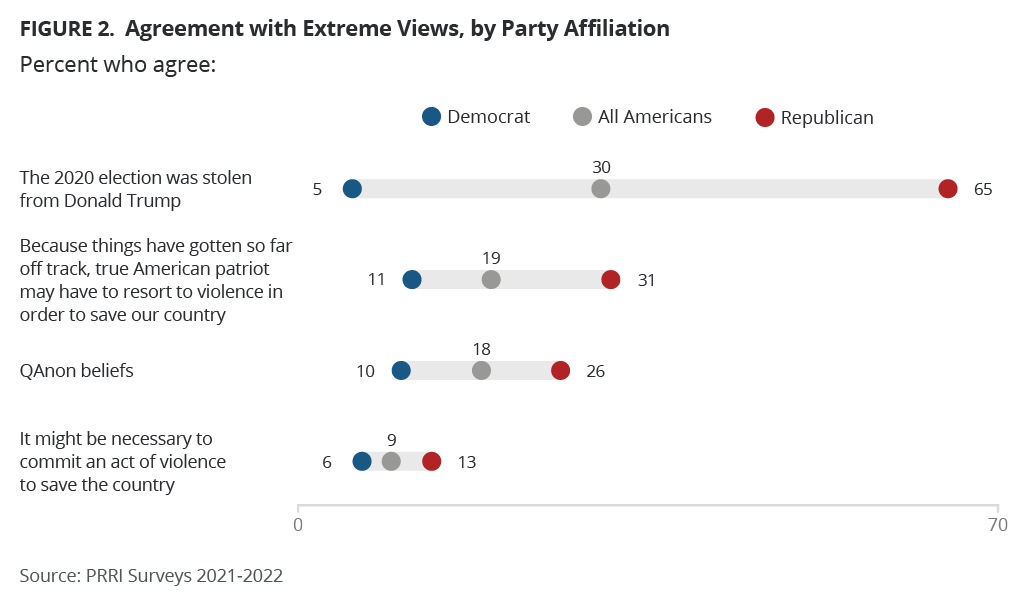 Understanding the effects of political polarization is crucial as deepening polarization represents a threat to democracy. It divides voters and their representatives into “diametrically opposed camps that are unwilling to compromise or yield power to their opponents,” according to a Brookings Institution brief, and in extreme cases can result in violence.

[1] PRRI began tracking a set of three questions beginning in March 2021, measuring agreement or disagreement (completely agree, mostly agree, mostly disagree, or completely disagree) with three foundational QAnon beliefs, including the following: a) The government, media, and financial worlds in the U.S. are controlled by a group of Satan-worshipping pedophiles who run a global child sex trafficking operation; b) There is a storm coming soon that will sweep away the elites in power and restore the rightful leaders; and c) Because things have gotten so far off track, true American patriots may have to resort to violence in order to save our country.