Republicans in the House of Representatives have voted to dismiss Rep. Liz Cheney (R-Wyo.) from her position as chair of the House Republican Conference due to her refusal to support former President Donald Trump and go along with the so-called “Big Lie,” the false narrative that the 2020 election was stolen from Trump. PRRI’s March survey shows that Cheney is indeed in the minority within her party. While less than three in ten Americans (29%) agree with the statement that “the 2020 election was stolen from Donald Trump,” two-thirds of Republicans (66%) agree that the election was stolen. Among all Americans, more than two-thirds (68%) disagree with the “big lie,” including 57% who completely disagree. Only 33% of Republicans disagree, and less than one in five (18%) completely disagree. 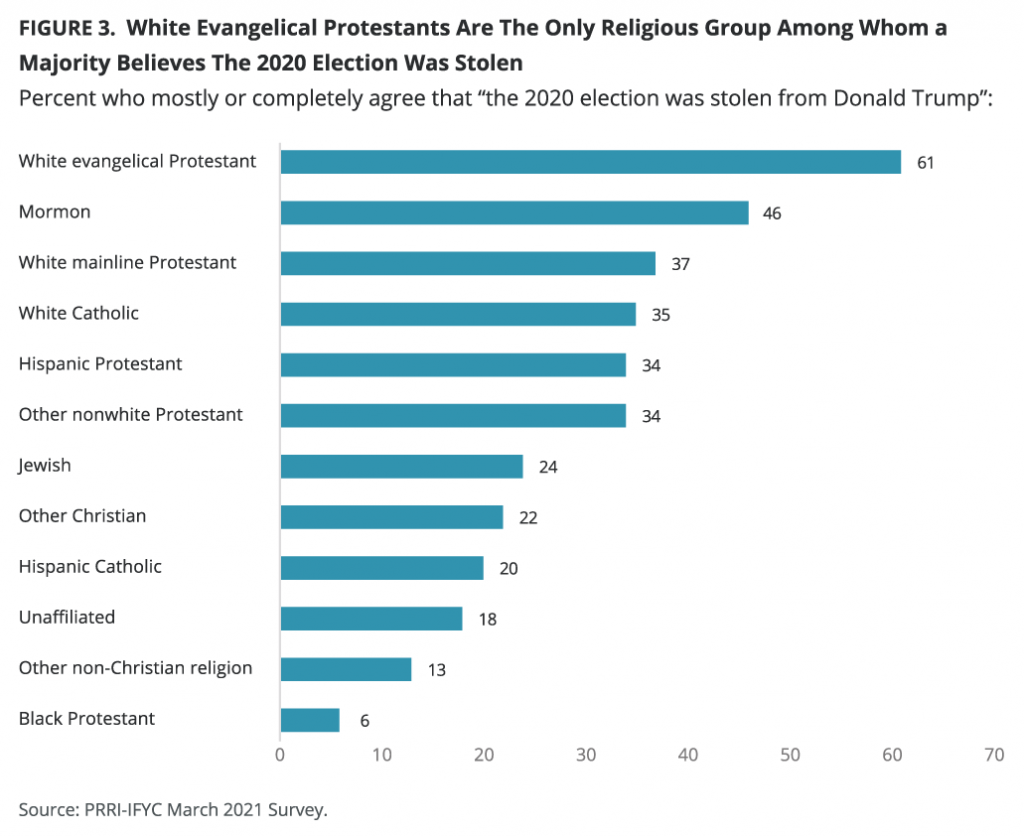 [1] “Other Protestant of color” includes all Protestants who are not white, Black, or Hispanic (including Asian American or Pacific Islander, multiracial, Native American, or any other race or ethnicity). Categories were combined due to sample size limitations.

[2] “Other Christian” includes all Christians who are not specified in any other category, including Catholics who are Black, Asian American or Pacific Islander, multiracial, Native American, and any other race or ethnicity; Jehovah’s Witnesses; Orthodox Christians; and any other Christian group. “Other non-Christian religion” includes those who are Muslim, Hindu, Buddhist, Unitarian Universalist, or any other world religion. Categories were combined due to sample size limitations.

[3]  Americans of other races includes Asian American or Pacific Islander, Native American, and any other single race or ethnicity. Categories were combined due to small sample sizes. The number of cases of Americans who identify with other racial groups without a college education is 72. Yet differences in education are statistically significant.