There is no discernable racial gap in opposition to cutting Medicaid. Roughly seven in ten of white (69%) and nonwhite Americans (68%) oppose such cuts, while 28% of both whites and nonwhites support cutting federal funding for Medicaid. Among whites, there is a notable difference by education. Nearly two-thirds (66%) of whites without a college degree oppose federal budget cuts to Medicaid, while more than three-quarters (77%) of whites with a college degree say the same.

At a time of strong partisan divisions over health care, there is political consensus in support for protecting federal Medicaid funding. A majority of Republicans (55%), independents (69%), and Democrats (78%) oppose such cuts. Notably, six in ten (60%) Democrats strongly oppose reducing federal funding to Medicaid. 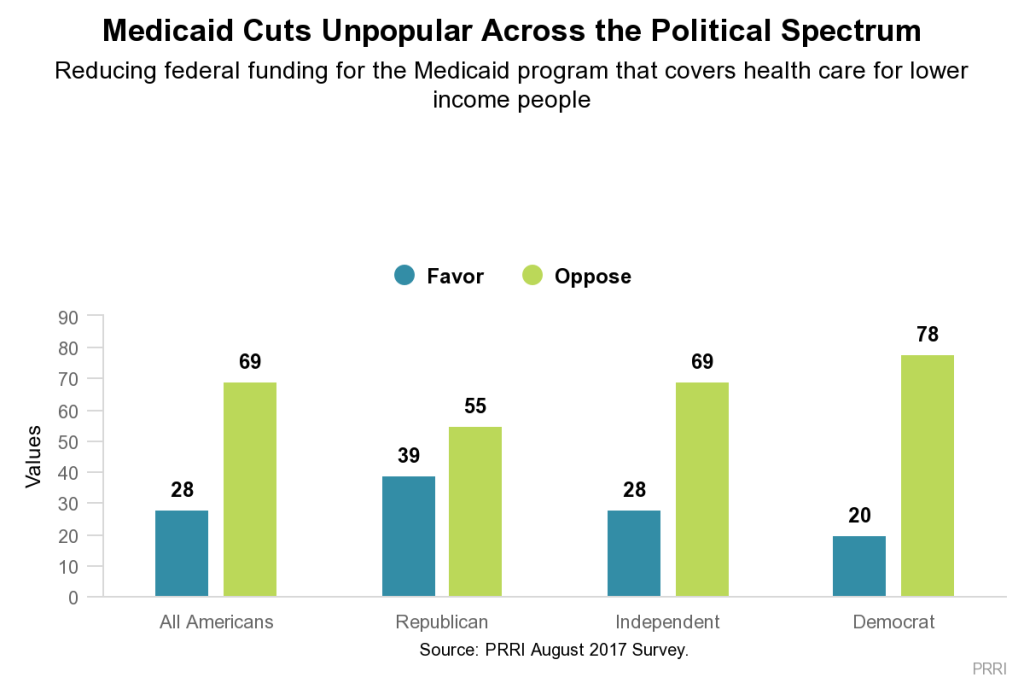 There is strong opposition to Medicaid cuts among both men and women. More than six in ten (64%) men and approximately seven in ten (72%) women oppose such spending cuts.

Nearly Half the Public is Worried About Losing Health Care Coverage

Partisan divisions are stark. While fewer than three in ten (28%) Republicans report being at least somewhat worried that they or someone in their family will lose their health insurance in the next year, nearly half (47%) of independents and a majority (55%) of Democrats say the same.

Women express far more concern than men about whether they themselves or a family member could lose their health insurance. A majority (53%) of women say they are at least somewhat concerned that they or one of their family members will lose their health insurance coverage in the next year, while only 37% of men say the same. Nearly one-third (31%) of women are very worried about this possibility. 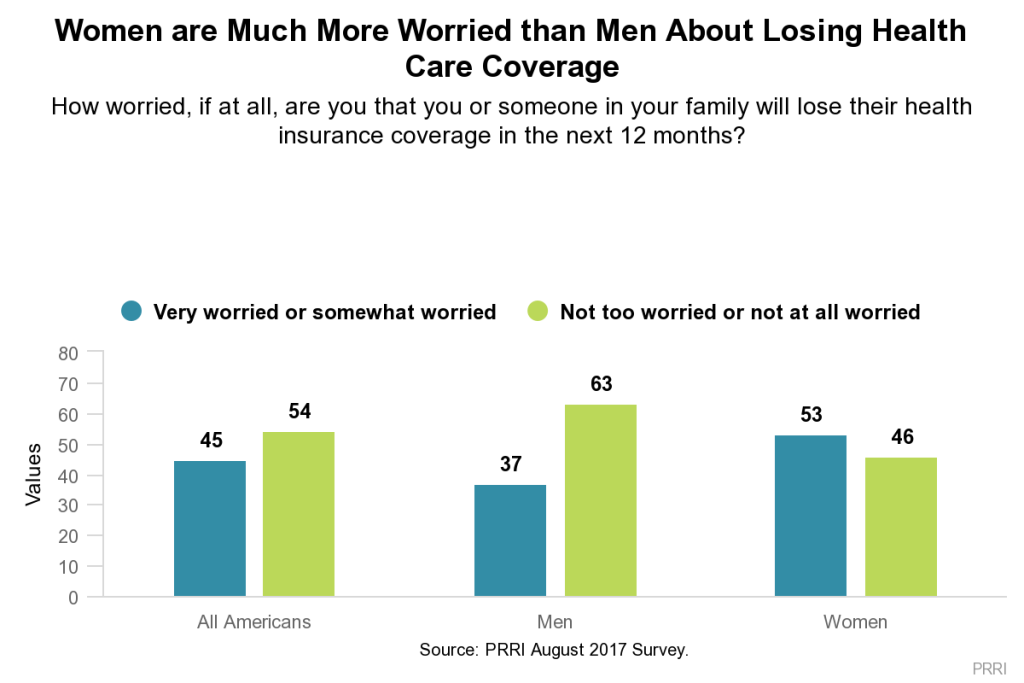 Despite support for government health care programs like Medicaid, Americans tend to place responsibility for serious health conditions, including addiction and mental health problems, on the individuals affected. More than six in ten (61%) Americans agree that most serious health conditions can be traced back to people making poor lifestyle choices. Fewer than four in ten (37%) disagree.

Although there are some differences of opinion along partisan lines, majorities of Republicans (74%) and Democrats (60%) agree that most serious health conditions can be traced back to poor lifestyle choices.

White Americans are somewhat less likely than nonwhite Americans to agree most serious health conditions can be traced back to lifestyle choices, although majorities of both groups affirm this idea (57% and 67%, respectively).

Most Americans Say Sobriety is a Matter of Personal Effort

Americans are more likely than not to agree that addiction is largely driven by individual choices and effort. A majority (54%) of Americans say most people who are addicted to drugs and alcohol could get clean and sober if they just tried harder, while roughly four in ten (43%) disagree.

There are significant differences in perceptions of addiction by race and class. More than six in ten (63%) nonwhite Americans agree most people with addictions could get sober if they just tried harder. White Americans are divided on the issue (48% agree and 49% disagree). However, there are notable divisions among whites by educational attainment. Only about one-third (32%) of whites with a college degree believe addicts could become sober if they put forth enough effort, while nearly six in ten (58%) whites without a college degree say the same.

The views of partisans also vary significantly. More than six in ten (62%) Republicans and a majority of independents (53%) agree getting clean and sober is a matter of effort. Democrats are more divided: Half (50%) believe sobriety is possible with enough personal effort, while close to half (45%) disagree. 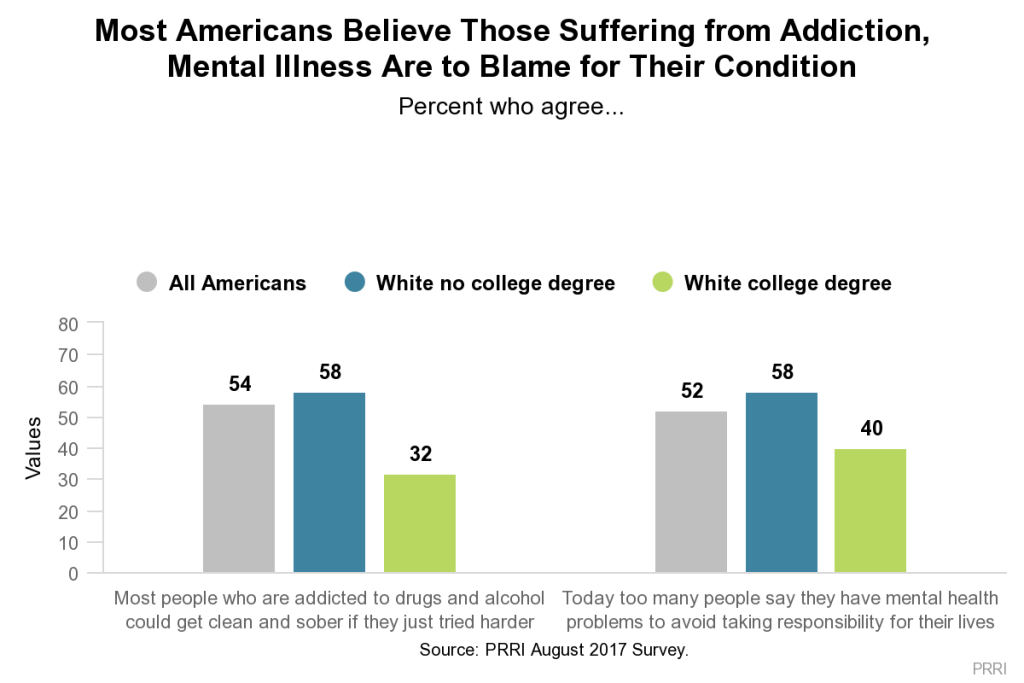 Majorities of both white and nonwhite Americans agree mental health issues are often used as an excuse to avoid taking responsibility (52% and 54%, respectively). Again, considerable educational differences emerge among whites. Nearly six in ten (58%) whites without a college degree agree that too many people use mental health issues to avoid responsibilities, compared to only 40% of whites with a college degree who say the same.

Partisan divisions on perceptions of mental health are larger than those seen on physical health. About two-thirds (64%) of Republicans agree too many people say they have mental health issues to avoid responsibilities, compared to 42% of Democrats. A majority (54%) of Democrats disagree that people with mental health problems are using them as an excuse. Views of independents largely reflect the population as a whole.

The views of men and women differ modestly. A majority (55%) of men and nearly half (49%) of women agree that too many people say they are suffering from mental health issues in an attempt to avoid taking personal responsibility for their decisions.

Related Research
Support for Impeachment Grows; Half of Americans Believe Russia Interfered with Election
Most Americans Oppose Restricting Rights for LGBT People
Public Support for Basic Policies of DACA Program Edges Up
Thanks for signing up!