Trump is viewed far more negatively among nonwhite Americans than previous Republican presidents. Only 16% of black Americans view Trump favorably—fewer than half of the number who have favorable opinions of Bush (34%) and Reagan (49%). Only about one in five (21%) Hispanics view Trump favorably—half the number who view Bush (47%) and Reagan (50%) favorably. Nearly half (46%) of white Americans have a favorable view of Trump, while nearly six in ten (59%) have a favorable view of Bush and nearly three-quarters (72%) view Reagan favorably. 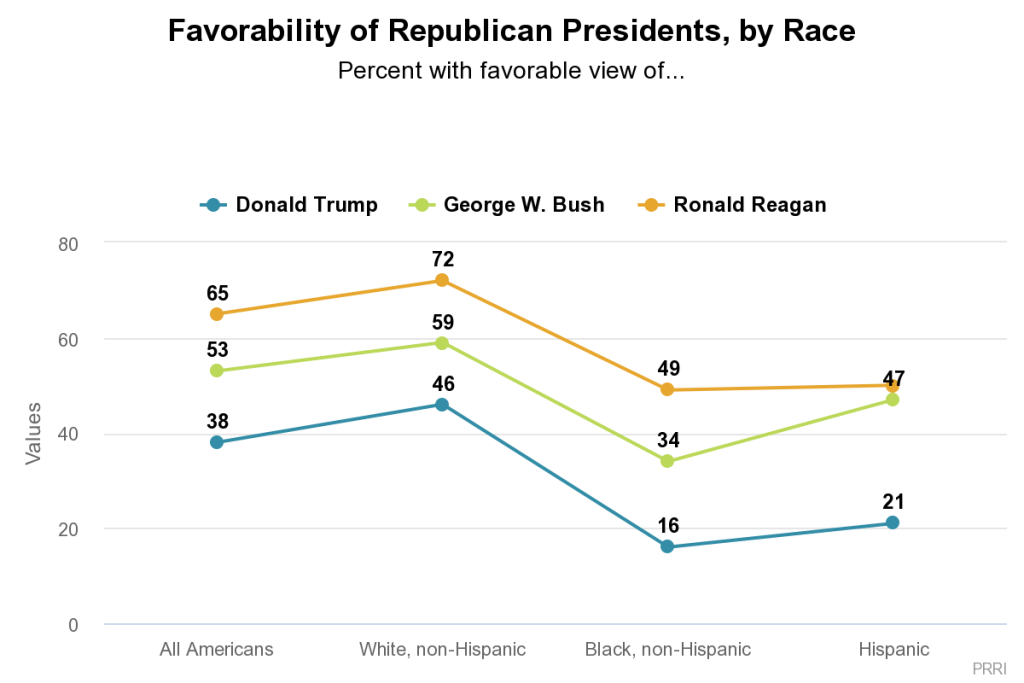 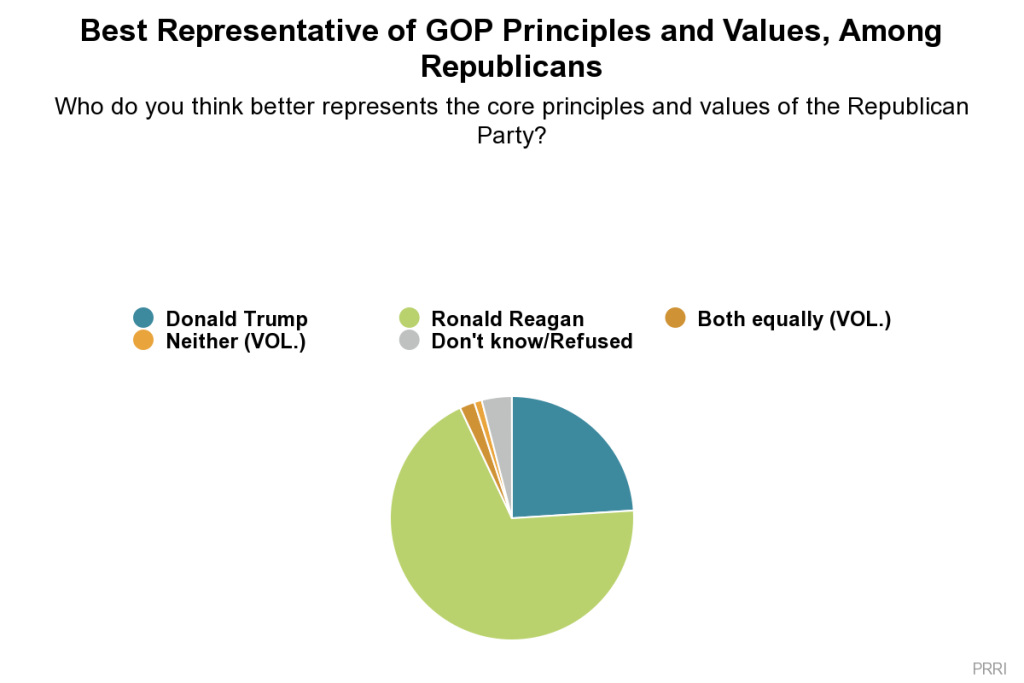 Republicans with a high school education or less are more likely than those with a college degree to say that Trump best represents the GOP’s principles and values (33% vs. 13%, respectively). Perhaps surprisingly, Republican seniors (age 65 or older) are also more likely than those under the age of 50 to say Trump is the best representative of Republican values (36% vs. 20%, respectively).

Even Republicans who hold a favorable view of Trump say that Reagan is a better exemplar of Republican Party values and principles than Trump (63% vs. 30%, respectively).

Views of Russia and Vladimir Putin

Americans express generally negative feelings about Russia and Russian President Vladimir Putin. Nearly six in ten (58%) Americans express a negative opinion of Russia, while only one-quarter (25%) have a positive view. Views have grown only slightly more negative since 2013, when 54% of the public reported feeling unfavorably toward Russia.3

The modest rise in negative sentiment was driven nearly exclusively by Democrats. More than two-thirds (68%) of Democrats express a negative view of Russia, compared to about half (51%) who reported feeling this way in 2013. Republican feelings toward Russia have been stable, with about six in ten (59%) expressing unfavorable views of Russia today and in 2013 (58%). The views of independents also remained largely unchanged during this period, with a majority (52%) expressing an unfavorable opinion about Russia today versus 53% in 2013.

There are only modest differences by race and ethnicity. About one-quarter (27%) of white Americans, compared to about one in five black (20%) and Hispanic (19%) Americans have a positive impression of Russia. Notably, there are no significant educational differences among whites.

Among religious groups there is a consensus of opinion about Russia. More than six in ten black Protestants (66%), white Catholics (65%), and white evangelical Protestants (63%), and majorities of religiously unaffiliated Americans (57%) and white mainline Protestants (57%) have an unfavorable view of Russia.

Young Americans are less likely to express hostility toward Russia. More than one-third (34%) of young adults (age 18 to 29) report having a favorable view of Russia, compared to only 18% of seniors. Half (50%) of young adults, but nearly seven in ten (69%) seniors, express an unfavorable view.

Vladimir Putin is viewed even more negatively than Russia. Roughly two-thirds (66%) of the public say they have an unfavorable opinion of the Russian leader while only 15% view him positively. Nearly one in five (19%) Americans offer no opinion or report being unfamiliar with Putin.

American views appear strongly conditioned on political affiliation. More than four in ten (43%) Republicans view Russia as an ally or friendly, a view shared by only 28% of Democrats. About half (49%) of Republicans believe Russia is unfriendly or an enemy, compared to two-thirds (67%) of Democrats. Democrats are more than twice as likely as Republicans to say Russia is America’s enemy (37% vs. 18%, respectively). 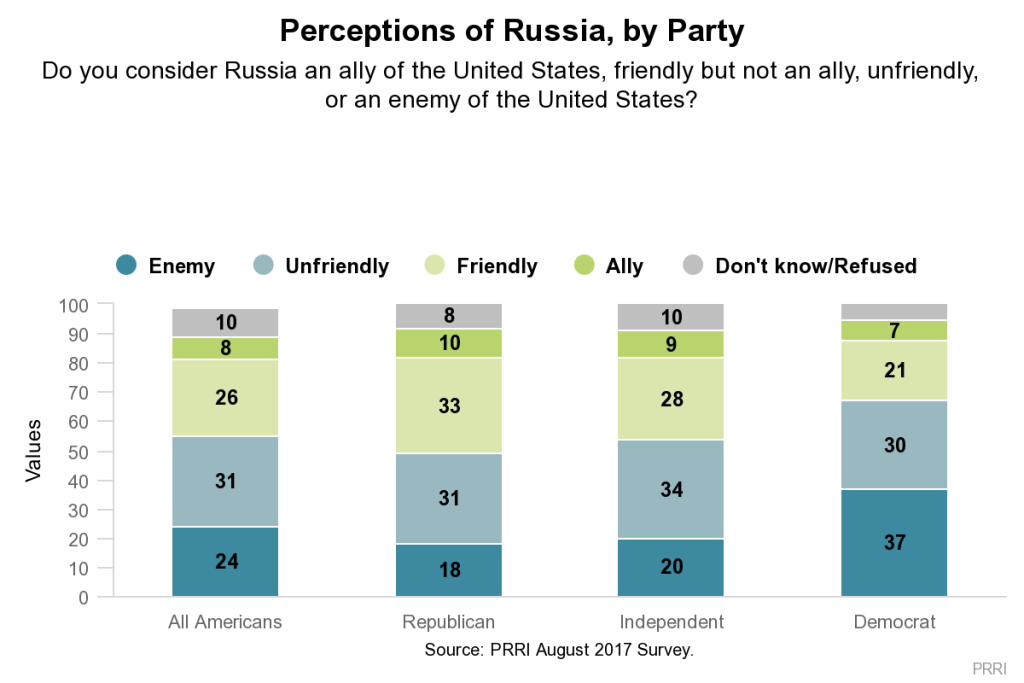 Attitudes differ markedly by generation as well. Young adults are about twice as likely as seniors to perceive Russia as either an ally or a friend to the U.S. (42% vs. 20%, respectively). More than seven in ten (71%) seniors say Russia is unfriendly toward the U.S. or is an enemy, a view shared by fewer than half (49%) of young adults. Seniors are more than twice as likely as young people to say Russia is America’s enemy (35% vs. 16%, respectively).

Russian Interference in the 2016 Election

Fewer than half (48%) of Americans believe there is clear evidence that Russia interfered in the 2016 election to help the Trump campaign. More than four in ten (43%) disagree while about one in ten (9%) offer no opinion.

Views are sharply divided by party. Eight in ten (80%) Democrats, compared to only 20% of Republicans, agree there is conclusive evidence of Russian involvement. Independents align with the public overall.

There is considerable disagreement between Americans by race and ethnicity. Nearly three-quarters (73%) of black Americans and a majority (52%) of Hispanics agree there is evidence of Russian interference. Only 43% of white Americans agree; nearly half (49%) disagree. However, the views of whites are highly stratified by education level. Nearly six in ten (58%) whites with a college degree say there is clear evidence of Russian election interference, compared to only 36% of whites without a college degree.

Support for impeaching the president has increased significantly over the last six months. Currently, four in ten (40%) Americans believe Trump deserves to be impeached, up 10 percentage points from 30% who expressed support for this action in February. A majority (53%) of Americans do not believe Trump should be impeached and removed from office, a view held by 65% of the public in February. 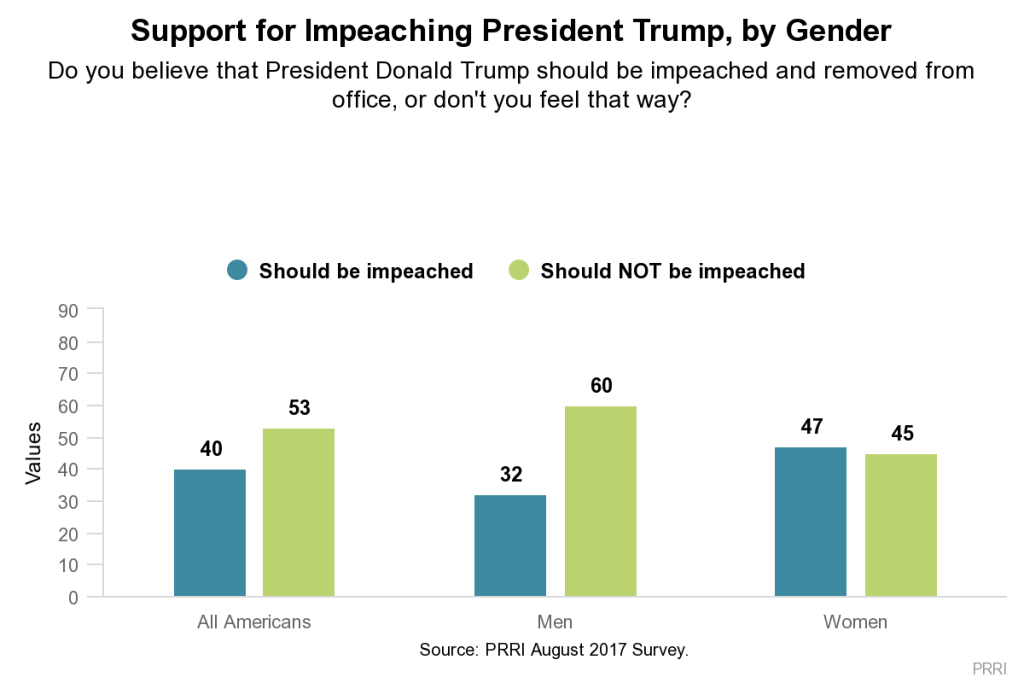 There is a gaping gender divide in views about impeachment. Only about one-third (32%) of men, but nearly half (47%) of women, say the President should be impeached and removed from office. Compared to men, women have become much more supportive of impeachment over the last six months. Only 35% of women favored impeaching Trump in February compared to 26% of men. 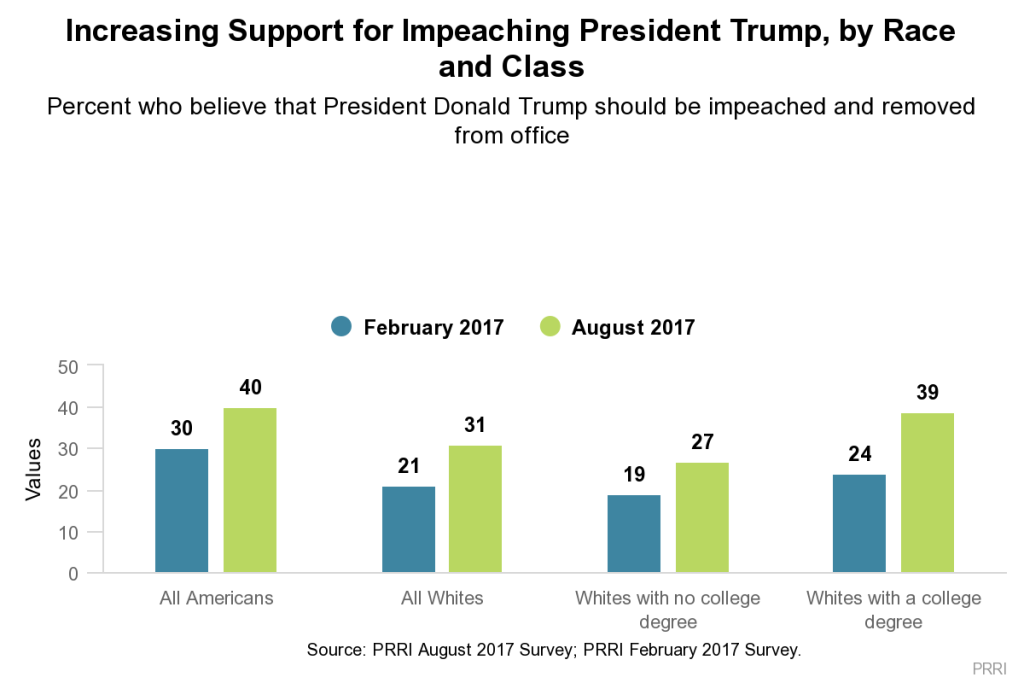 Americans of different racial and ethnic backgrounds also express quite divergent views about impeachment. More than seven in ten (72%) black Americans and a majority (53%) of Hispanic Americans say Trump should be impeached and removed from office. Fewer than one-third (31%) of white Americans agree. White Americans with a college degree are somewhat more likely to express support for impeachment than those without a college education (39% vs. 27%, respectively). In February, only about one-quarter (24%) of whites with a college education supported impeachment while fewer than one in five (19%) whites without a college degree said the same.

There is a similar gender divide on this issue. A majority (54%) of women, but only about four in ten (43%) men, believe Trump has acted in ways that contravene the Constitution.

1 Pew Research Center for the People & the Press Favorability Poll, July 2001.
2 NBC News/Associated Press Poll, July 1981. Reagan’s favorability is based on a slightly different question: “Do you have a favorable or unfavorable opinion of Ronald Reagan?”
3 Pew Research Center for the People and the Press/Council on Foreign Relations, America’s Place in the World Survey, October 2013.

Related Research
47% of the Country Say Trump Has Violated the Constitution, but Few Support Impeachment
Who Sees Discrimination? Attitudes on Sexual Orientation, Gender Identity, Race, and Immigration Status | Findings from PRRI’s American Values Atlas
Thanks for signing up!