In September 2017, U.S. Attorney General Jeff Sessions announced that the Trump administration would rescind the Deferred Action for Childhood Arrivals (DACA) program in six months’ time. Public support for policies underlying the DREAM Act, which includes measures to make DACA provisions permanent, have increased over the past few years according to PRRI’s August 2017 Survey.

Since 2011, support for this policy has increased significantly. In 2011, a majority of Americans (57 percent) favored allowing immigrants illegally brought to the U.S. as children to gain legal resident status if they joined the military or attended college, while 40 percent opposed.1

Despite strong support among the public, major political divisions over this policy remain. Nearly eight in ten (79 percent) Democrats and 70 percent of independents favor granting legal residency to immigrants brought here illegally as children who serve in the military or attend college. Republicans are divided, with a slight majority (51 percent) of Republicans expressing support, and 42 percent opposed. 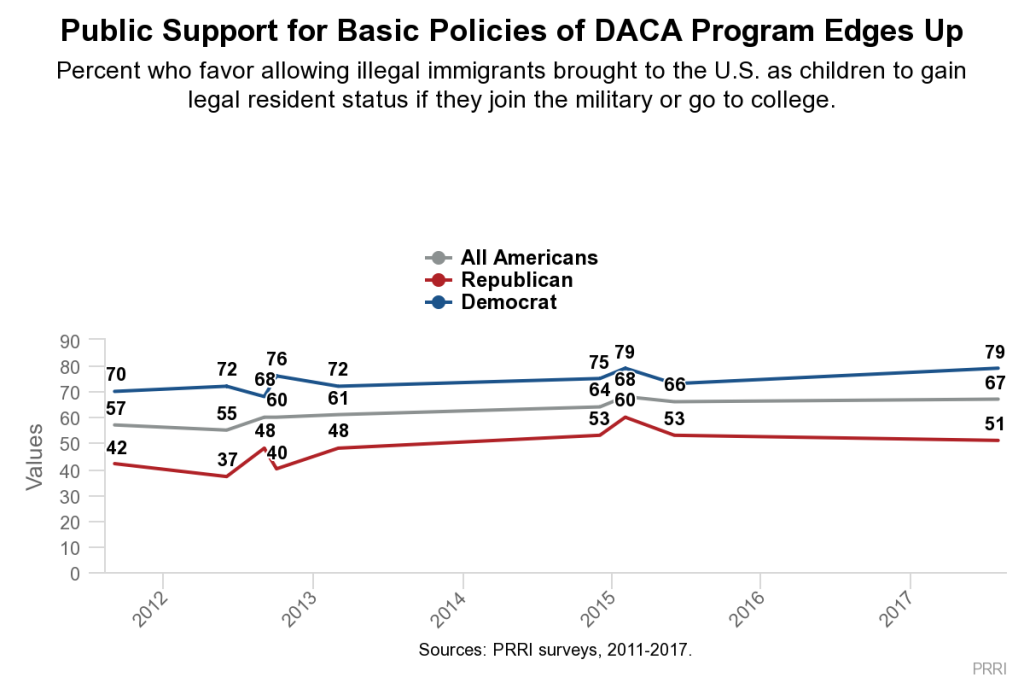 Both Republicans and Democrats have experienced similar increases in support over the last few years. In 2011, only about four in ten (42 percent) Republicans favored this policy compared to seven in ten (70 percent) Democrats.

This policy is generally popular with religious Americans as well. About three-quarters of Catholics (72 percent), along with about two-thirds of white mainline Protestants (69 percent), religiously unaffiliated Americans (68 percent), and white evangelical Protestants (65 percent), believe that immigrants brought into the country illegally as children ought to be eligible for legal resident status if they join the military or go to college.

This policy is supported by Americans of all ages. Nearly eight in ten (79 percent) young adults (age 18-29) favor granting legal residency to children brought to the U.S. illegally if they serve in the military or attend college, along with seven in ten (70 percent) Americans age 65 or older.

Support transcends racial and ethnic lines as well. Three-quarters of Hispanic (75 percent) and black Americans (75 percent) favor granting legal residency to immigrants who came to the U.S. illegally as children if they serve in the military or go to college, along with about two-thirds (66 percent) of white Americans. Among whites there are significant divisions by educational attainment. Roughly three-quarters (73 percent) of college-educated whites and 62 percent of whites without a four-year college degree express support for this policy.