This Wednesday in Arizona, Republican Party nominee Donald Trump will give a speech outlining his evolving views on immigration policy. While Trump has long advocated for the deportation of the 11 million immigrants who are illegally living in the U.S. today, he has recently signaled that he may softened this position. New PRRI analysis gives insight into why: rank and file Republicans’ immigration policy preferences are decidedly more pragmatic than ideological. In short, among Republicans as a whole, concerns about the negative impact of immigrants does not translate into support for deportation.

When Trump raises concerns about the negative impact of immigrants, he is expressing views that are widely shared not only among his primary supporters but among Republicans overall. Republicans are significantly more pessimistic about immigrants’ contributions than independents or Democrats, with roughly two-thirds (65 percent) saying immigrants constitute a burden on the country because they take jobs, housing, and health care. 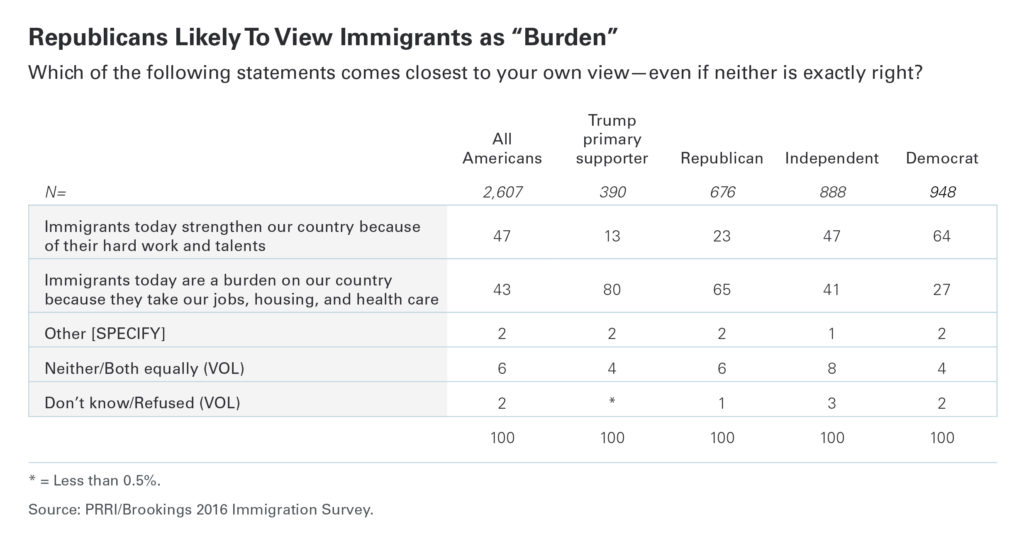 However, when questioned about immigration policy solutions, Republicans overall opt for more measured positions. When asked how the immigration system should deal with immigrants who are currently living in the U.S. illegally, only about three in ten (29 percent) Republicans say the immigration system should identify and deport them, compared to seven in ten who say they should be allowed some legal status, including nearly half (49 percent) who say we should allow them a way to become citizens provided they meet certain requirements, and 22 percent who say they should be allowed to become permanent legal residents but not citizens. Notably, Trump primary supporters are significantly more likely than Republicans overall to favor the deportation option (41 percent vs. 29 percent, respectively), although even among Trump supporters support for deportation does not reach a majority. 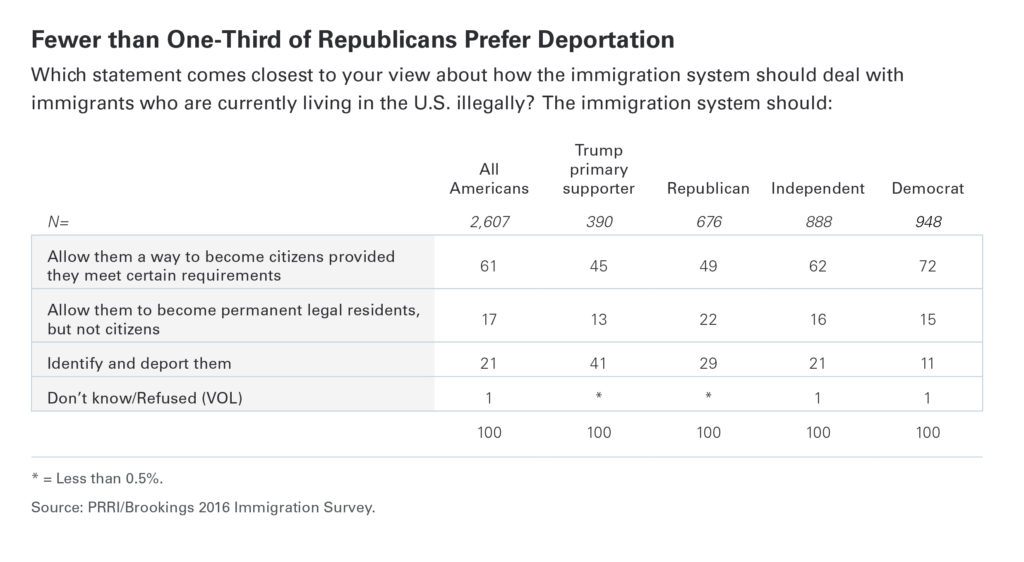 The key to understanding the apparent tension between these numbers is that rank and file Republicans seem to recognize the challenges a policy of mass deportation would face. Nearly seven in ten (68 percent) Republicans, along with similar numbers of the general population (70 percent), say it would be “very difficult” to deport all the immigrants living in the U.S. illegally.

Related Research
Two-Thirds of Trump Supporters Say Nation Needs a Leader Willing to Break the Rules | PRRI/The Atlantic Survey
How Americans View Immigrants, and What They Want from Immigration Reform: Findings from the 2015 American Values Atlas
Thanks for signing up!
Tweet
Tweet
Tweet