President Donald Trump withdrew from the Trans-Pacific Partnership on Monday via executive order, signaling a new outlook on trade for the new administration. Using findings from PRRI’s American Values Surveys, we look at where Americans stand on free trade. 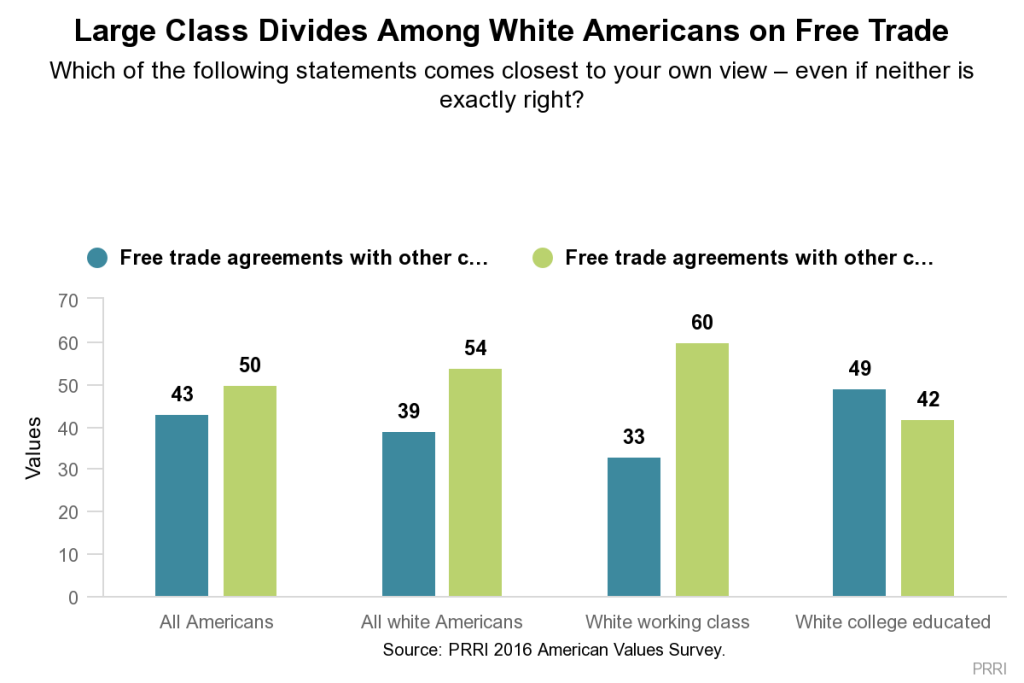 Americans are closely divided about the benefits of free trade, per the 2016 American Values Survey. Forty-three percent of the public say free trade agreements are mostly helpful because they open markets to U.S. companies and allow Americans to buy goods more cheaply. Half (50 percent) of Americans take an opposing stance: Free trade agreements are mostly harmful because they send jobs overseas and drive down wages in the U.S.

There are modest differences in views about free trade by race and ethnicity—but white Americans are divided sharply by class. Six in ten (60 percent) white working-class Americans say free trade agreements are mostly harmful, a view shared by only 42 percent of white college-educated Americans.

Among Democrats, views about free trade vary considerably by region. Midwestern Democrats are much less likely to see the benefit of free trade than those in the Northeast and South (44 percent vs. 59 percent and 58 percent, respectively). Western Democrats are somewhat divided with close to half (49 percent) expressing a positive view about the benefits of free trade and four in ten (40 percent) expressing a negative view. Republican views on free trade are not significantly different across regions.

The TPP, negotiated under former president Obama, includes 12 Pacific Rim countries and notably excludes China. Per the 2015 American Values Survey, most (73 percent) of the public say China’s unfair trade practices are at least somewhat responsible for the country’s current economic problems, including 80 percent of Republicans and 70 percent of Democrats.