Since 2001, World Refugee Day has been celebrated on June 20 to honor refugees around the world. At the end of 2019, it was estimated there were nearly 80 million forcibly displaced people around the world, including 26 million refugees and 4.2 million asylum seekers, according to the United Nations Refugee Agency (UNHCR). 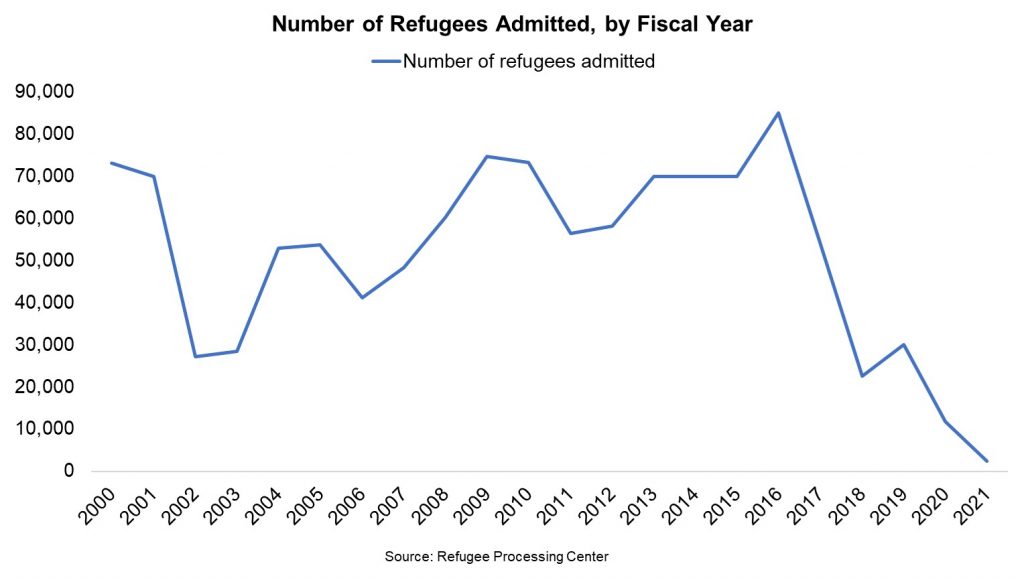 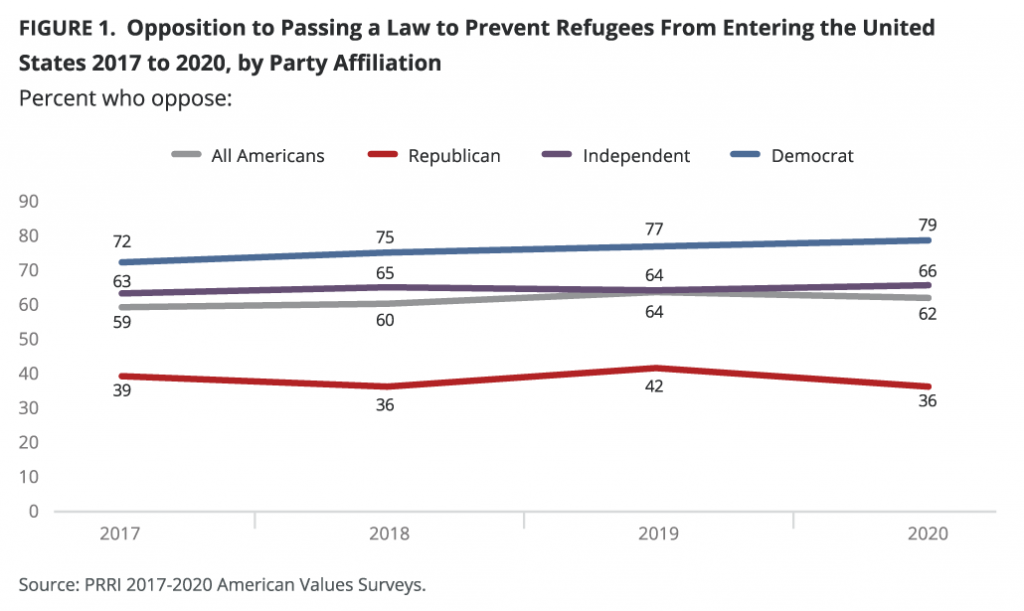 Republicans have fluctuated little in their opposition to this law, ranging from a low of 36% opposition in 2018 and 2020 to a high of 42% in 2019. Democrats have consistently grown more opposed to banning refugees, from 72% in 2017 to now nearly eight in ten (79%) opposing refugee bans. Independents have remained stable throughout this period, with a slight increase in their opposition from 63% in 2017 to 66% in 2020.

Majorities of Americans across various demographics oppose passing a law to prevent refugees from entering the United States, including age, education, race, region, and religious affiliation. White evangelical Protestants are the only group who consistently have grown in favor of this law, from 49% in 2017 to 58% today. However, when using regression modeling and including political and socioeconomic characteristics of Americans, PRRI finds that religion is not a statistically significant predictor of opposition to a law that would prevent refugees from entering the United States. In fact, the single most important predictor to understand opposition to this hypothetical law is the fear that “immigrants are invading our country and replacing our cultural and ethnic background.” Americans who completely disagree with this statement are 19 times more likely to oppose the passage of a law that will prevent refugees from entering the United States.

In addition, Democrats, independents, and liberals, as well as young Americans and college-educated Americans, are about twice as likely as Republicans, conservatives, Americans ages 65 and older, and Americans without college degrees to oppose the passage of a law that will prevent refugees from entering the United States. These findings echo those from previous PRRI findings in which most Americans support at least some portion of Biden’s immigration agenda.

Concerns over the increasing number of asylum seekers arriving at the southern border are believed to have caused delays in refugee admissions. PRRI 2020 data shows that nearly six in ten Americans (57%) oppose building a wall along the U.S. border with Mexico, while about four in ten (42%) support this policy. Not surprisingly, 77% of Americans who oppose preventing refugees from coming to the United States also oppose the building of a wall along the U.S. border.

Hostility in political rhetoric and policy have not had the desired impact on public opinion. Rather, the Biden administration’s proposal to increase resettlement from Latin America and other regions to the U.S. speaks to Americans’ continued welcoming attitudes toward refugees.