President Joe Biden’s approach to the Trump administration’s aggressive stance on immigration policy has resulted in major policy reversals. On Biden’s first day in office, he introduced a bill that would give undocumented immigrants a path to citizenship, ended the travel ban from several majority-Muslim countries, halted the construction of the U.S.-Mexico border wall, suspended most deportations and, most recently, stopped enforcing the “public charge” rule and planned to reduce the amount of time that migrant families are detained. [1]

A recent PRRI report on immigration explores public opinion toward these policies and finds that most Americans favor allowing undocumented immigrants brought to the U.S. as children to gain legal resident status (66%), favor allowing all immigrants living in the country illegally a path to citizenship provided they meet certain requirements (64%), oppose a law preventing refugees from entering the U.S. (62%), oppose building a wall along the U.S.-Mexico border (57%), and oppose immigrant family separations (76%).

After taking into account political and socioeconomic characteristics of Americans using regression modeling, PRRI finds, unsurprisingly, that partisanship and political ideology are key predictors of support for or opposition to the Biden immigration agenda. As expected, Democrats and independents as well as liberals and moderates are notably more likely than Republicans and conservatives to support Biden’s immigration agenda.

Previous studies show that cultural and economic factors predict attitudes toward immigration in the United States. PRRI’s results add further evidence to support the cultural argument but do not find support for the economic argument. Americans who completely disagree with the idea that “Immigrants are invading our country and replacing our cultural and ethnic background” are 11.6 times as likely as those who completely agree to support Biden’s immigration agenda. However, there are no statistically significant differences between Americans who agree and disagree that “immigrants compete with hard-working Americans for jobs.” 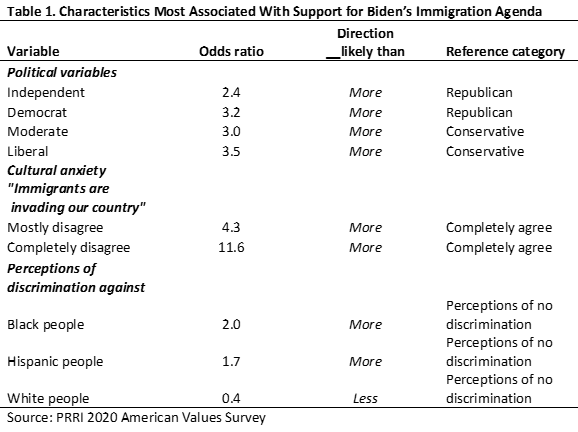 [1]
The Public Charge Rule issued restrictions to visas and green card applications to any immigrant who was deemed likely to depend on public cash assistance or government-funded care. PRRI’s 2019 data showed that Americans were evenly divided on whether potential government benefit use should disqualify undocumented immigrants from applying for citizenship.

[2]  PRRI constructed a logistic regression model to explain which characteristics of Americans are associated with support for Biden’s immigration agenda. The dependent variable is a dichotomous variable where scores for favoring allowing undocumented immigrants brought to the U.S. as children to gain legal resident status and allowing all immigrants living in the country illegally a path to citizenship provided they meet certain requirements, as well as opposing a law preventing refugees from entering the U.S., building a wall along the U.S.-Mexico border, and immigrant family separations are all coded as 1; scores for all other categories are coded as 0. Cronbach’s alpha for these variables is 0.74. The model includes partisanship and      ideology and measures for cultural and economic anxiety, gender, age, income, education, religious affiliation broken down by race, and views of discrimination toward Asian, Black, Hispanic, and white people.