President Trump’s recent executive orders banning all refugees and immigrants from seven predominantly Muslim countries were met with protests at major airports across the U.S. Many protestors cited concerns about Muslim friends and colleagues as an important reason why they were protesting.

New PRRI analysis finds that relatively few Americans regularly interact with Muslims. Only eight percent report having had a conversation with someone who is Muslim at least once a day in the past year. About three in ten (29 percent) report occasional interactions with someone who is Muslim, while more than six in ten say they seldom (26 percent) or never (36 percent) have had such a conversation.

And even Americans who have had conversations with Muslims at least occasionally in the past year express much more positive views of Muslims than those who report much less regular interaction. 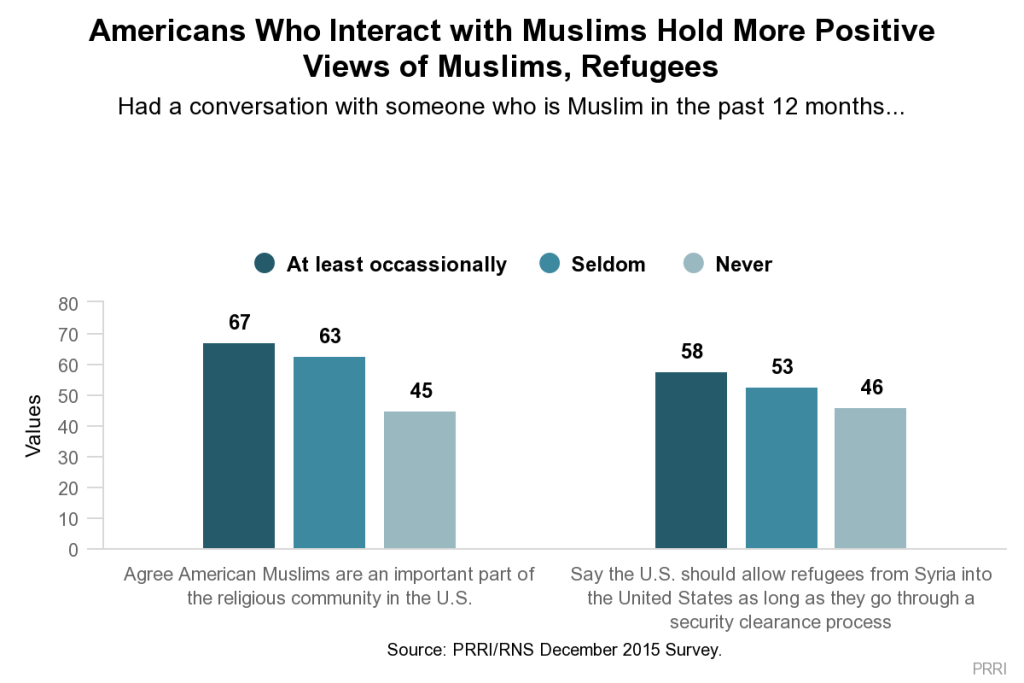 Social interaction with Muslims also influences views on U.S. refugee policy. Among Americans who have had at least occasional conversations with Muslims, nearly six in ten (58 percent) say the U.S. should allow refugees from Syria into the country provided they go through a security clearance. Americans who report no interactions with a Muslim are split: 46 percent are in favor of allowing Syrian refugees into the U.S., while 45 percent believe that they should not be allowed into the country at this time.

For more, read through the PRRI/RNS December 2015 survey.

Related Research
Nearly Half of Americans Worried That They or Their Family Will Be a Victim of Terrorism
How Immigration and Concerns about Cultural Change are Shaping the 2016 Election | PRRI/Brookings Survey
The Divide Over America’s Future: 1950 or 2050? Findings from the 2016 American Values Survey
Thanks for signing up!
Tweet
Tweet
Tweet