The divisions within the Republican Party have been on clear display in the wake of the tumultuous end to Donald Trump’s presidency, which included a violent insurrectionist takeover of the U.S. Capitol on January 6. In the aftermath, will the party remain loyal to Trump and embrace its more extremist parts, or will it try to expel the extremists and risk losing considerable support?

The answer seems to be leaning toward Trumpism and extremism in some ways, particularly with calls to “move on” from the January 6 riot and the Republican Party’s refusal to sanction Rep. Marjorie Taylor Greene (R-GA) for embracing and championing violence against Democrats. However, some Republicans, including Senate Minority Leader Mitch McConnell (R-KY), have specifically said there is no place for conspiracy theories in the party. But McConnell has notably stopped short of supporting most measures for holding Trump accountable for the events of January 6.

Recent PRRI polling shows that the vast majority of Republicans in the general public remain generally faithful to Trump. Although Trump’s favorability ratings among Republicans dipped in the aftermath of the January 6 events (72%, down from 85% in November), the vast majority of Republicans (75%) agree that Trump “is a true patriot,” with a narrow majority (51%) completely agreeing with that statement. Additionally, nearly two-thirds of Republicans (65%) agreed just before the inauguration of President Joe Biden that “When President Trump leaves office, America as we know it will be over.” One-third (33%) completely agreed with the sentiment. More than half of Republicans (55%) said Trump holds no responsibility at all for the events of January 6, and another 25% say the former president bears only a little responsibility. When asked directly whether they consider themselves more of a Trump supporter or more of a Republican Party supporter, 42% of Republicans chose the former president over the party.[1] 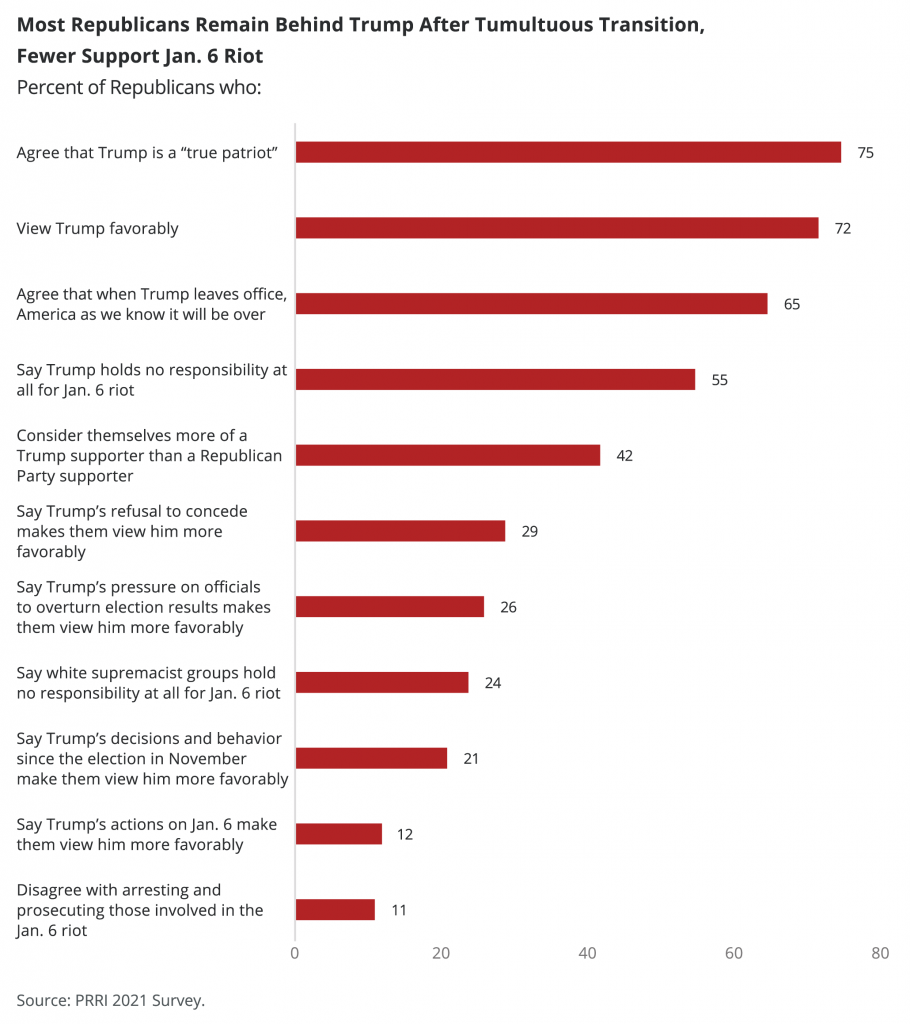 Republicans’ views of the January 6 events provide good indicators of how many support taking extreme action in Trump’s name, as well as who might side with the white supremacist groups that were heavily involved in the riot. Despite the clear imagery during the riot and evidence that had emerged in the immediate aftermath showing that white supremacists were heavily involved, nearly one in four Republicans (24%) said white supremacist groups do not bear any responsibility at all for the violence at the Capitol that day. A smaller proportion of Republicans (12%) say Trump’s actions that day made them view the president more favorably, and 11% disagree with arresting and prosecuting those involved in the Capitol takeover.

With three-quarters of Republicans still feeling generally favorable to Trump and viewing him as a true patriot, it is reasonable for Republican leaders to fear that they would suffer electorally for actions against Trump in the upcoming impeachment trial. The hesitancy to take action against the more extreme elements of the party show that Republican leaders are also well aware that somewhere around one-fifth of the party aligns with those extremist views; although this is a smaller proportion, losing those votes could still be costly. At the same time, Republican leaders will have to decide whether they will lead the party or allow extremist elements to exist and possibly grow within the party’s ranks.