What Are Americans Worried About in the 2020 Election?

Voter Harassment and a Peaceful Transition of Power 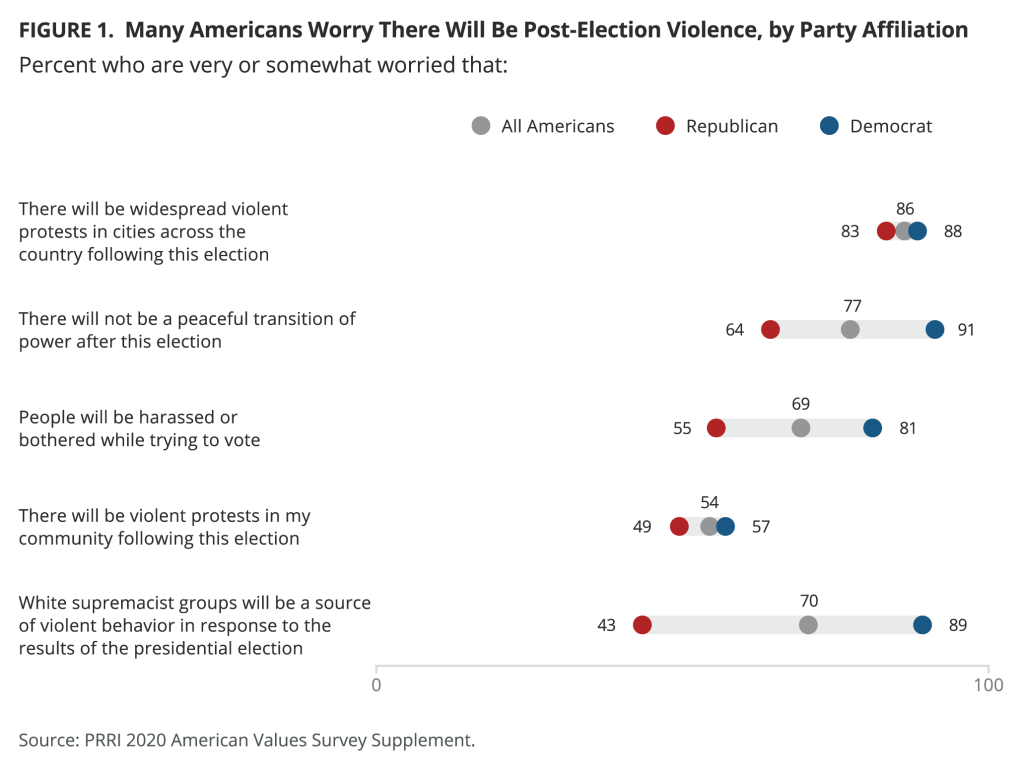 Violence in the Aftermath of the Election

More than eight in ten Americans (86%) are somewhat or very worried that there will be widespread violent protests in cities across the country following this election. This issue transcends partisanship, with more than eight in ten Republicans (83%) and Democrats (88%) saying they are somewhat or very worried. Black Americans (74%) are less likely than white (89%) and Hispanic Americans (84%) to say that they are worried about widespread violent protests across the country.

What Do Americans Want From Religious Leaders in the 2020 Election?

Speaking Out to De-escalate Anger and Encourage Peaceful Protests

More than eight in ten Americans say it is somewhat important (24%) or very important (60%) for religious leaders to speak out to help de-escalate anger before it turns violent and encourage peaceful protests. 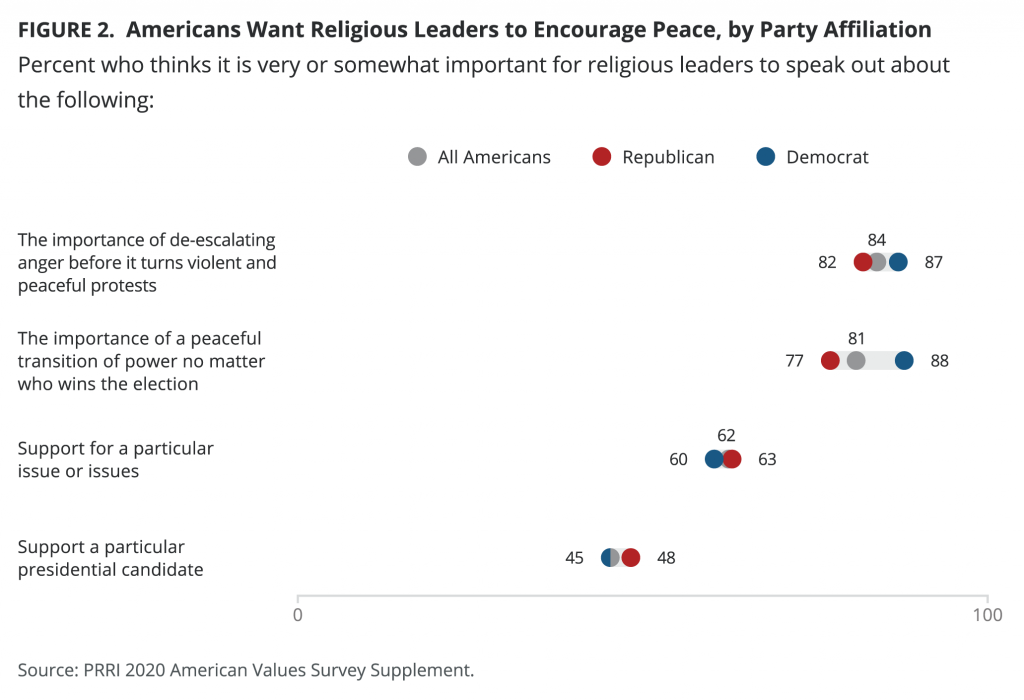 Speaking Out to Encourage a Peaceful Transition of Power

More than eight in ten Americans also say it is somewhat important (23%) or very important (58%) for religious leaders to speak out about a peaceful transition of power regardless of who wins the election.

Even though majorities of partisans say it is somewhat or very important for religious leaders to speak out about the importance of a peaceful transition of power no matter who wins the election, notably, Democrats (88%) are more likely than Republicans (77%) or independents (78%) to say so.

Large majorities of all religious groups say it is somewhat or very important for religious leaders to talk about the importance of a peaceful transition of power. Nine in ten white evangelical Protestants (91%) and Black Protestants (90%), eight in ten or more white Catholics (85%) and white mainline Protestants (80%), and nearly three in four religiously unaffiliated Americans (73%) agree.

Speaking Out to Support Issues or Candidates

Approximately six in ten Americans think it is somewhat important (36%) or very important (26%) for religious leaders to speak out about supporting a particular issue.

Partisans largely agree on this issue. Majorities of Republicans (63%), Democrats (60%), and independents (59%) think that it is somewhat or very important for religious leaders to speak about supporting a particular issue.

There are no significant partisan differences on this question. Less than half of Republicans (48%), Democrats (45%), and independents (41%) think that it is important for religious leaders to speak about supporting a particular presidential candidate. 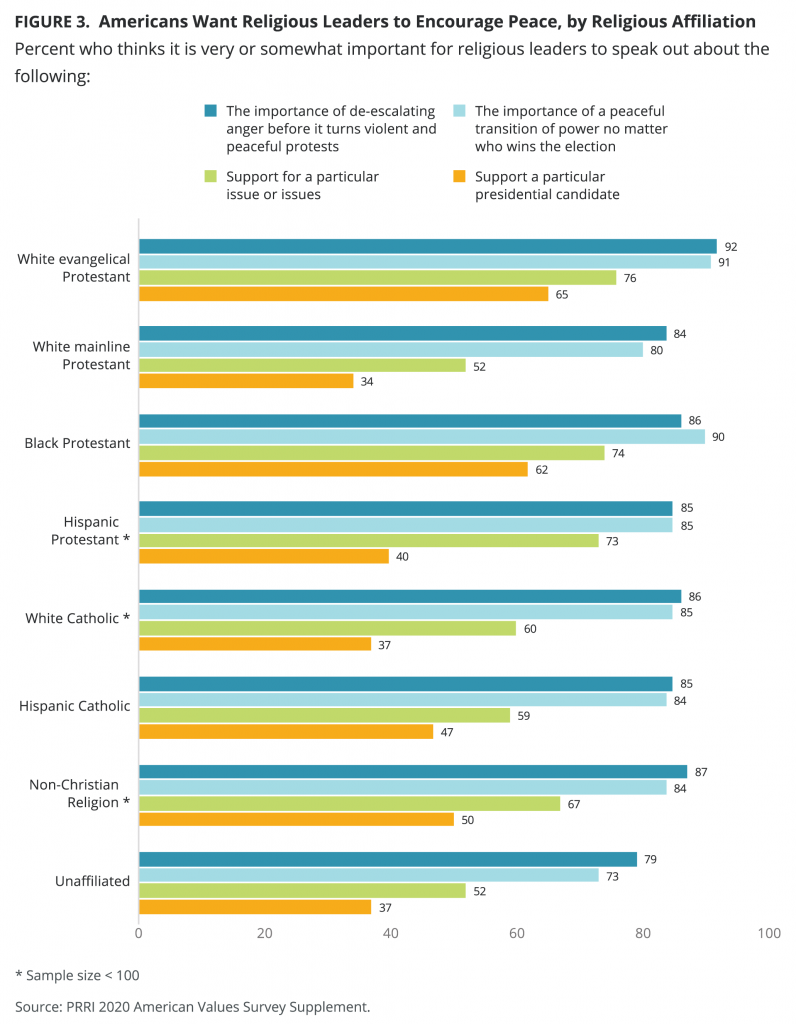 How Are Americans Planning to Vote in the 2020 Presidential Election?

Among religious groups, white evangelical Protestants are by far the most pro-Trump. In the large turnout likely voter model (70%), nearly eight in ten (79%) report that they plan to vote for Trump, compared to 15% for Biden. White mainline Protestants are evenly divided (46% for Trump vs. 48% for Biden), and white Catholics are leaning more toward Biden than Trump      (54% for Biden vs. 41% for Trump). Religiously unaffiliated Americans and Black Protestants are heavily skewed toward Biden over Trump (71% vs. 21% and 88% vs. 5%, respectively). The sample sizes of other religious groups are too small to report. [6] 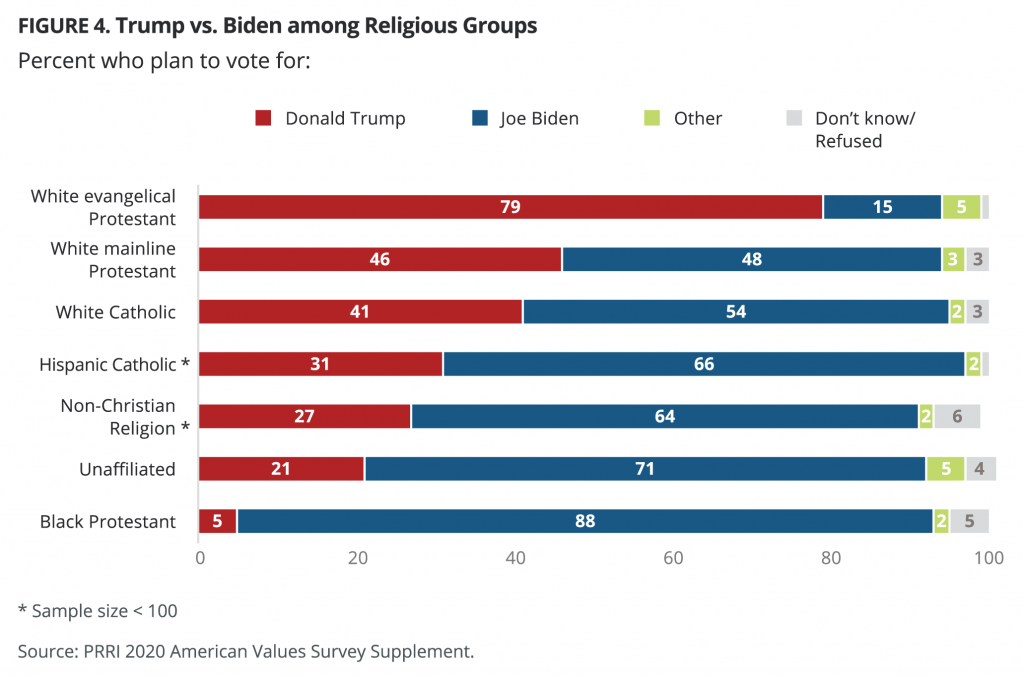 The survey was designed and conducted by PRRI. The survey was made possible by a generous grant from the Carnegie Corporation of New York, with additional support from the Ford Foundation, the Wilbur and Hilda Glenn Family Foundation, and the Unitarian Universalist Veatch Program at Shelter Rock. Interviews were conducted among a random sample of 2,538 adults (ages 18 and older) living in the United States, including all 50 states and the District of Columbia. Interviews were conducted both online using a self-administered design and by telephone using live interviewers. All interviews were conducted among participants in AmeriSpeak, a probability-based panel designed to be representative of the national U.S. adult population, run by NORC at the University of Chicago. Interviewing was conducted in both Spanish and English between Sept. 9 and Sept. 22, 2020. The margin of error, including the design effect, for the survey is +/- 2.6 percentage points at the 95% level of confidence.

A supplemental survey of 1,070 adults using the same methodology was conducted Oct. 9–12, 2020, to assess likely turnout, presidential candidate choice, and motivation for voting (for/against the candidate). The margin of error, including the design effect, for that survey is +/- 4.0 percentage points at the 95% level of confidence.

[1]The number of cases for other religious groups is < 100. Hispanic Protestants, N=70; Hispanic Catholics, N=84; members of non-Christian religions, N=83.

[2]Even though the number of cases for members of non-Christian religions is 83, the differences among white evangelical Protestants for this question are statistically significant.

[5] All numbers in this paragraph are from the average turnout model (55%).

[6]All numbers in this paragraph on vote by religious affiliation are from the large turnout model (70%). Because of smaller sample sizes for many religious subgroups, all numbers should be interpreted with caution. 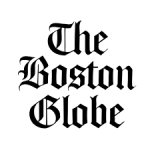 Boston Globe
On Election Day: Hope for the best, but prepare for the worst
Related Research
Dueling Realities: Amid Multiple Crises, Trump and Biden Supporters See Different Priorities  and Futures for the Nation
Thanks for signing up!