In an election that provided a slew of unpredictable turns, the religion vote broke along strikingly familiar lines. More than eight in ten (81%) white evangelical Protestants supported President-elect Donald Trump, slightly higher than former Republican candidate Mitt Romney’s support in 2012 (78%), while Clinton’s share was an anemic 16%. White evangelical Christians made up a sizable part of the electorate comprising roughly one-quarter (26%) of all voters similar to their share in previous elections. 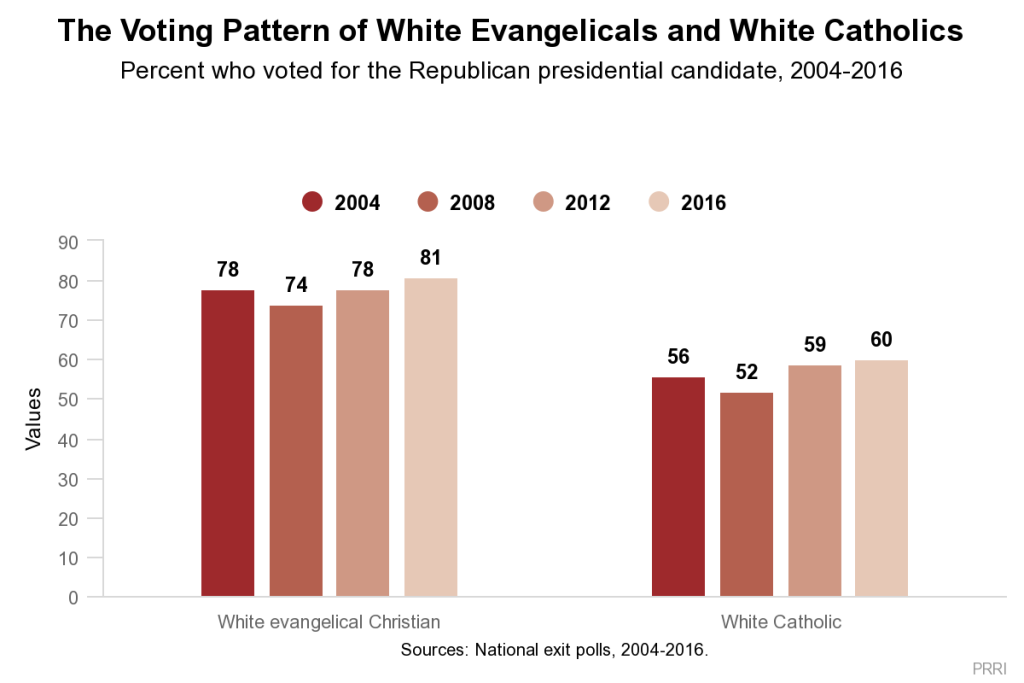 Catholics, as they have done in the past few elections, voted for the general election winner. A slim majority (52%) favored Trump, while fewer than half (45%) voted for Clinton. In 2012, Obama had a slight edge over Romney among Catholics (50% vs. 48%, respectively). There are, however, sharp divisions among Catholics by race and ethnicity. Sixty percent of white Catholics voted for Trump, compared to 37% who supported Clinton. In stark contrast, two-thirds (67%) of Hispanic Catholic voters favored Clinton in the election, while about one-quarter (26%) voted for Trump. 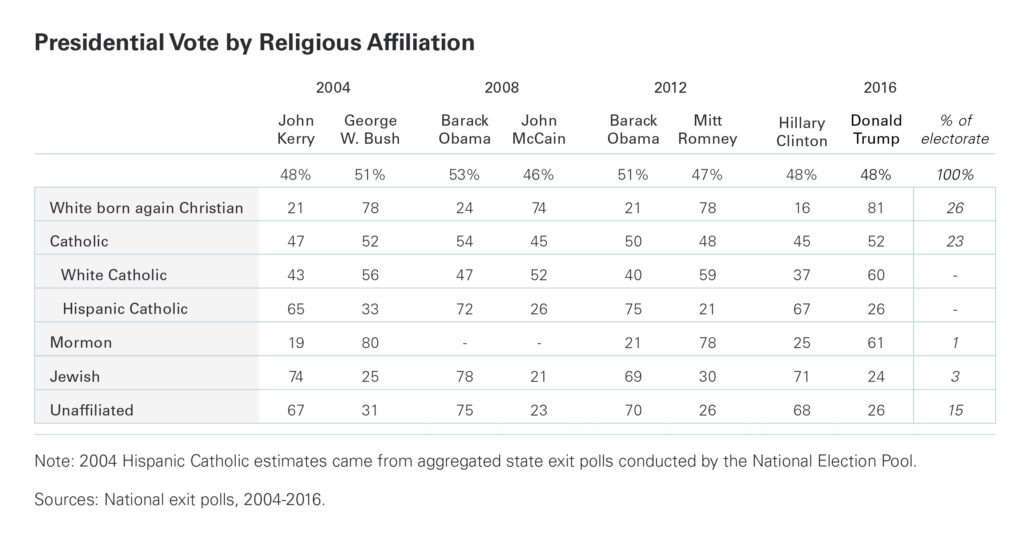 Unaffiliated voters continued their strong support for Democratic candidates. More than two-thirds (68%) voted for Clinton this year, while about one-quarter (26%) supported Trump. Notably, unaffiliated voters also made up a slightly larger slice of the electorate this year, representing 15% of all voters, compared to 12% in 2012.

Mormon support for Trump was significantly lower than for previous Republican nominees. Roughly six in ten (61%) Mormon voters favored Trump while Romney, the party’s first Mormon candidate, received the support from nearly eight in ten (78%) Mormons. However, Clinton was not able to capitalize on the defection from Trump, capturing only 25% of the Mormon vote. 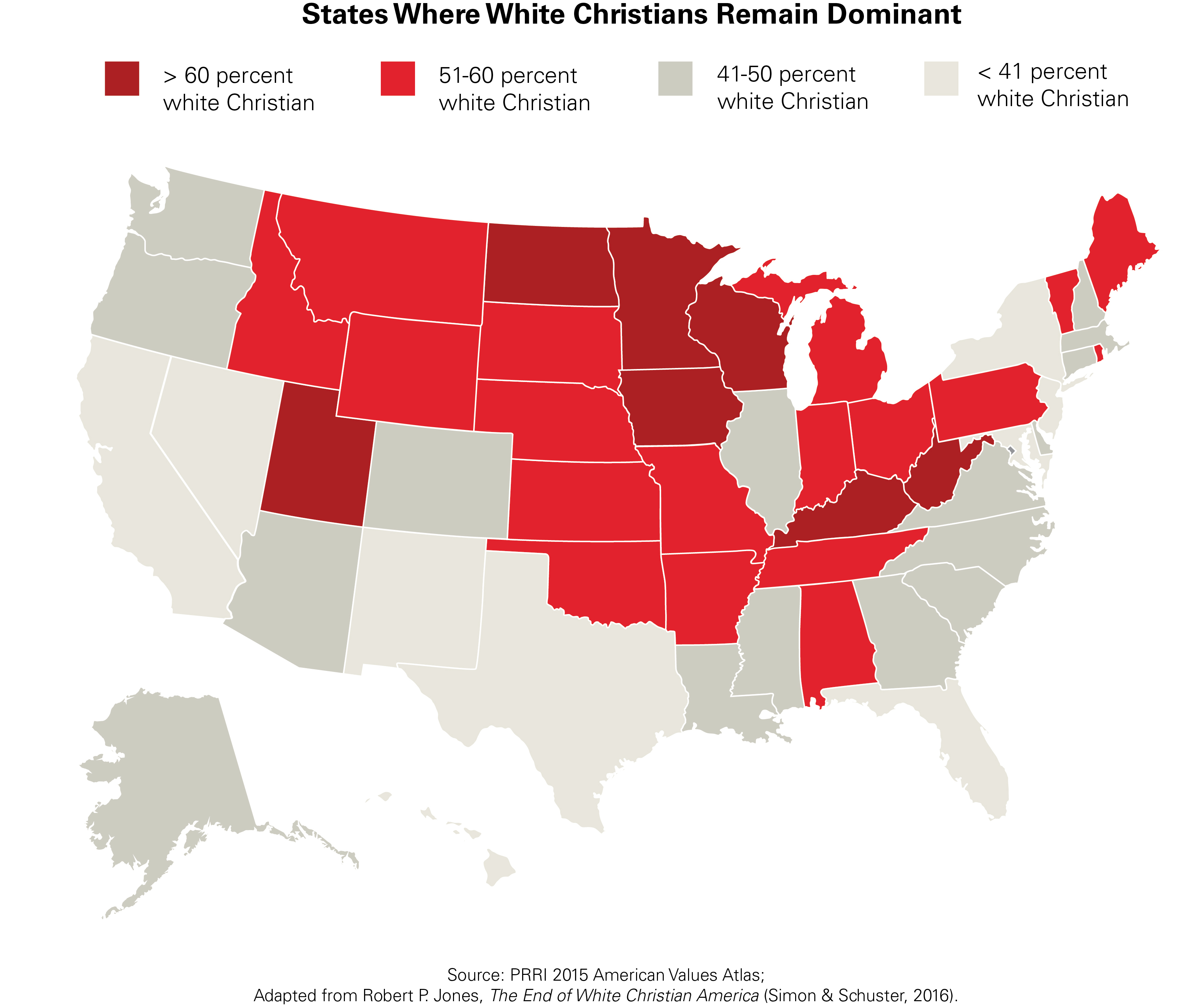 Trump performed well among states dominated by white Christians. Outside of the New England, Trump won (or is currently leading in) nearly every state with a majority white Christian population, including Wisconsin (63 percent white Christian), Michigan (51 percent), and Pennsylvania (57 percent). The lone exception was Minnesota (61 percent) which he narrowly lost to Clinton.

The Washington Post
‘End of White Christian America’ author: Evangelicals are in a fix

The Washington Post
Why some fear this election’s lasting damage to American Christianity
Related Research
The 2016 Religion Vote
The Divide Over America’s Future: 1950 or 2050? Findings from the 2016 American Values Survey
Americans Weigh in on Marijuana, Minimum Wage, and Death Penalty
Thanks for signing up!
Tweet
Tweet
Tweet