More than six in ten (64%) North Carolina residents favor laws that would protect gay, lesbian, bisexual, and transgender people from discrimination in jobs, public accommodations, and housing, while roughly one in three (31%) are opposed. While support for LGBT nondiscrimination laws is lower in North Carolina than it is nationally (71% favor), majorities of all major demographic, political, and religious groups in the state favor them. 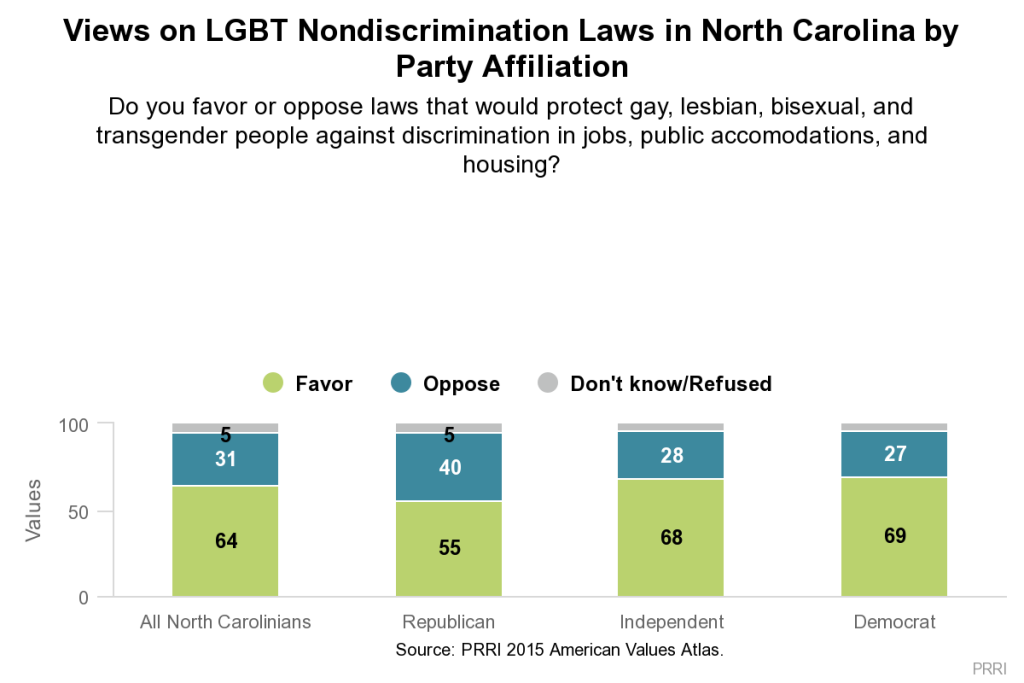 A majority (56%) of North Carolinians oppose allowing a small business owner to refuse to provide products or services to gay or lesbian people if doing so violates their religious beliefs, while nearly four in ten (37%) favor such a policy. Support for allowing religiously based service refusals of LGBT people among North Carolina residents is similar to levels among Americans overall (59% oppose, 35% favor).

There are significant generational differences in attitudes on whether small business owners should be allowed to deny service to gay or lesbian people on religious grounds. Nearly two-thirds (65%) of young North Carolina residents (age 18 to 29) oppose allowing small business owners to refuse products or services to gay or lesbian individuals if doing so violates their religious beliefs. North Carolina seniors (age 65 and older) are much more divided: a slim majority (51%) oppose allowing religiously based service refusals, while 39% favor allowing these refusals. One in ten (10%) seniors in the state offer no opinion on this issue.

Unlike views of nondiscrimination laws, there are substantial differences between white and black residents of the state. Nearly seven in ten (69%) black North Carolina residents oppose allowing small businesses to refuse service of gay and lesbian customers, a view shared by only half (50%) of white North Carolinians. More than four in ten (42%) white North Carolina residents, compared to fewer than one-quarter (24%) of black North Carolinians, say small business owners ought to be allowed to refuse goods or services to LGBT people if doing so would violate their religious beliefs.

North Carolina Democrats and Republicans express sharply contrasting views on the issue of religiously based service refusals of gay and lesbian people. Approximately two-thirds (68%) of Democrats oppose allowing small business owners to refuse service to gay or lesbian individuals on religious grounds, a view shared by fewer than four in ten (39%) Republicans. A majority (55%) of Republicans in North Carolina favor allowing these religiously based service refusals. The views of independents mirror the views of North Carolinians overall.

Religious groups in the state are also deeply divided over the issue. Nearly three-quarters (73%) of religiously unaffiliated residents in the state, roughly two-thirds (66%) of black Protestants, and nearly six in ten (59%) Catholics oppose allowing religiously based service refusals of gay or lesbian individuals. A majority (55%) of white mainline Protestants also voice opposition. North Carolinian white evangelical Protestants stand in sharp contrast: most (57%) favor allowing religiously based service refusals, while fewer than four in ten (37%) are opposed. 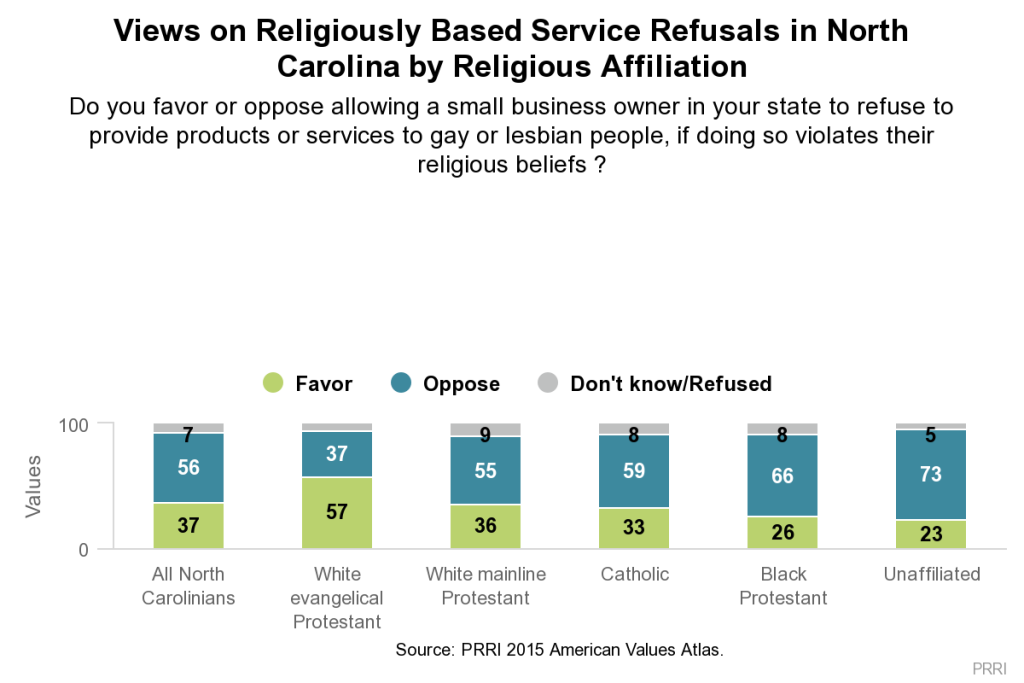 As the above analysis makes clear, attitudes about same-sex marriage do not necessarily predict opposition to LGBT nondiscrimination laws. Across a variety of demographic, political, and religious groups in North Carolina—including white evangelical Protestants and Republicans—there is majority support for LGBT nondiscrimination laws despite much lower support for same-sex marriage.

1 The Charlotte metropolitan area only includes the counties located in North Carolina for this analysis.

For a complete look at where Americans’ stand on these issues, read “Beyond Same-sex Marriage: Attitudes on LGBT Nondiscrimination Laws and Religious Exemptions from the 2015 American Values Atlas.”

To explore where residents in your state stand, explore the interactive American Values Atlas.