Four in ten (40%) Americans currently hold favorable views of Donald Trump, compared to nearly six in ten (57%) who view him unfavorably. Trump’s favorability has remained largely stable since August (38% favorable, 59% unfavorable) and the prior few months, but it is substantially down from his high point in March (49% favorable, 46% unfavorable). The current numbers are about the same as his 2019 average (41% favorable, 55% unfavorable). 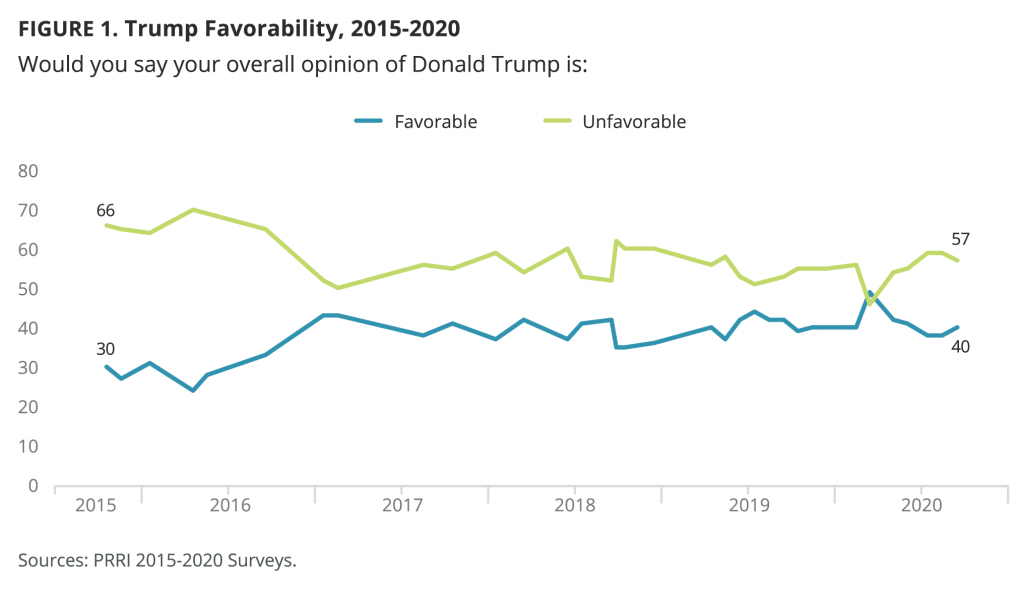 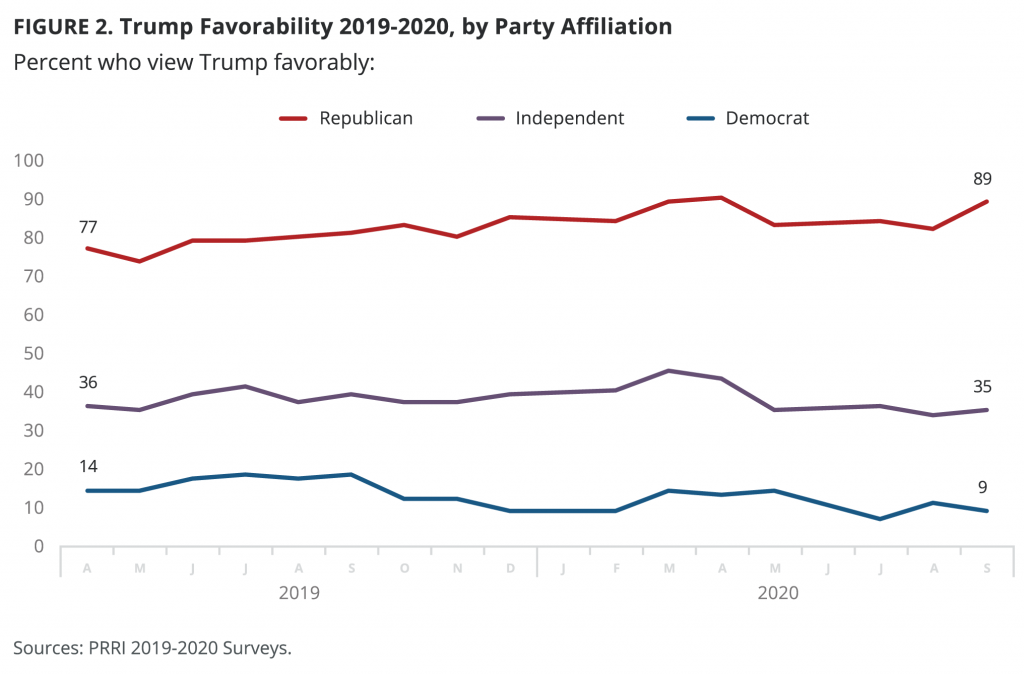 More than seven in ten (71%) white evangelical Protestants, 54% of white Catholics, 49% of white mainline Protestants, 35% of nonwhite Protestants, and 26% of religiously unaffiliated Americans hold favorable views of Trump. [1]Compared to August, Trump’s favorability rose significantly among white evangelical Protestants (from 56% to 71%) and among white Catholics (from 38% to 54%), slightly higher than their 2019 average levels (64% and 49%, respectively). Among all white Christians, nearly six in ten (58%) hold favorable views of Trump, significantly higher than 47% in August and 54% throughout 2019. 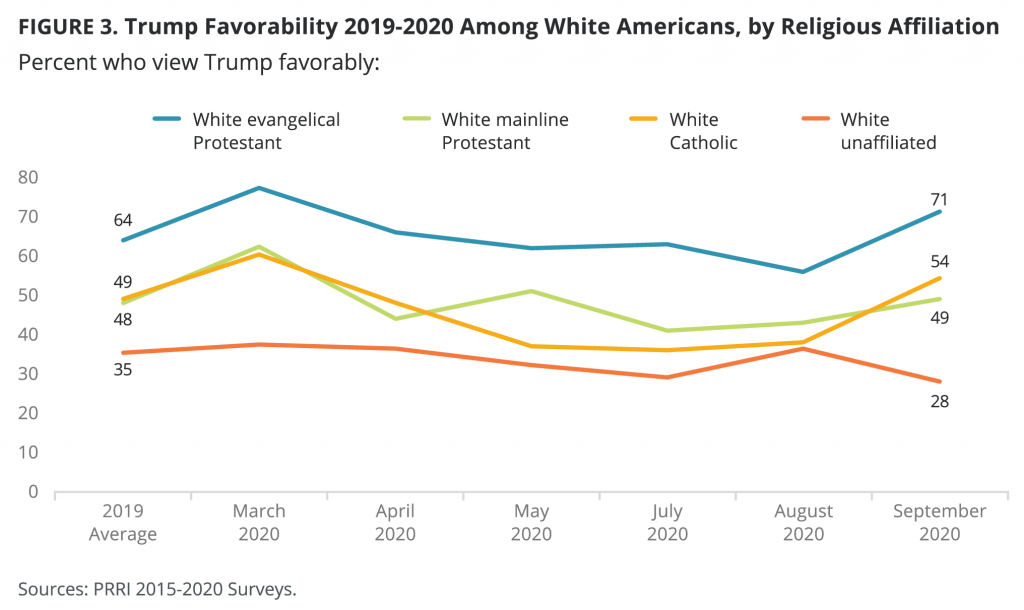 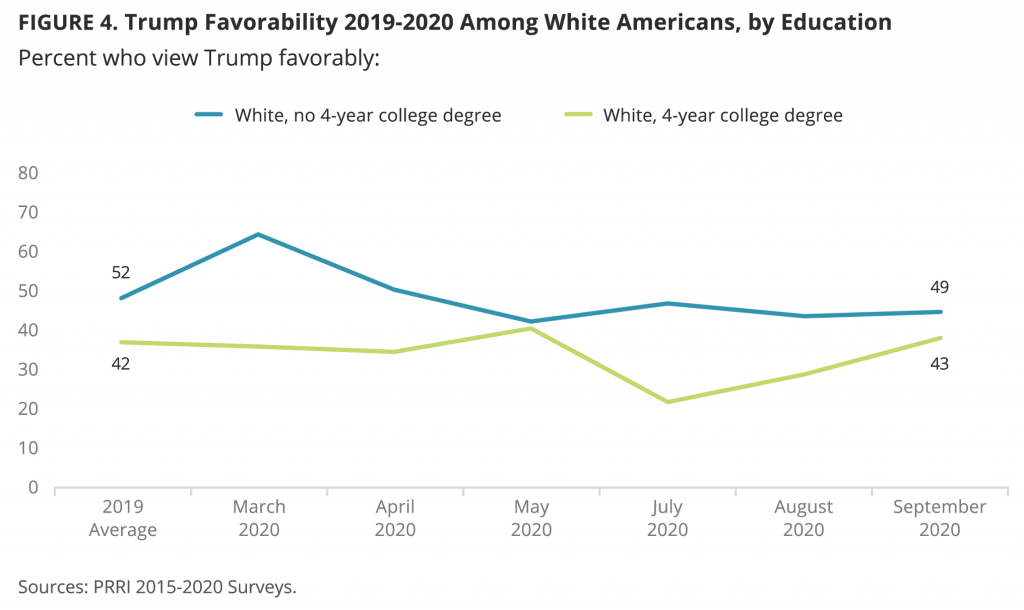 Favorable views of Joe Biden declined slightly in the last month, although the former vice president maintains stronger numbers than Trump. Less than half (46%) of Americans hold favorable views of Biden, down from a slim majority (51%) in August, but not significantly different from his July (48%) or September 2019 (48%) numbers. 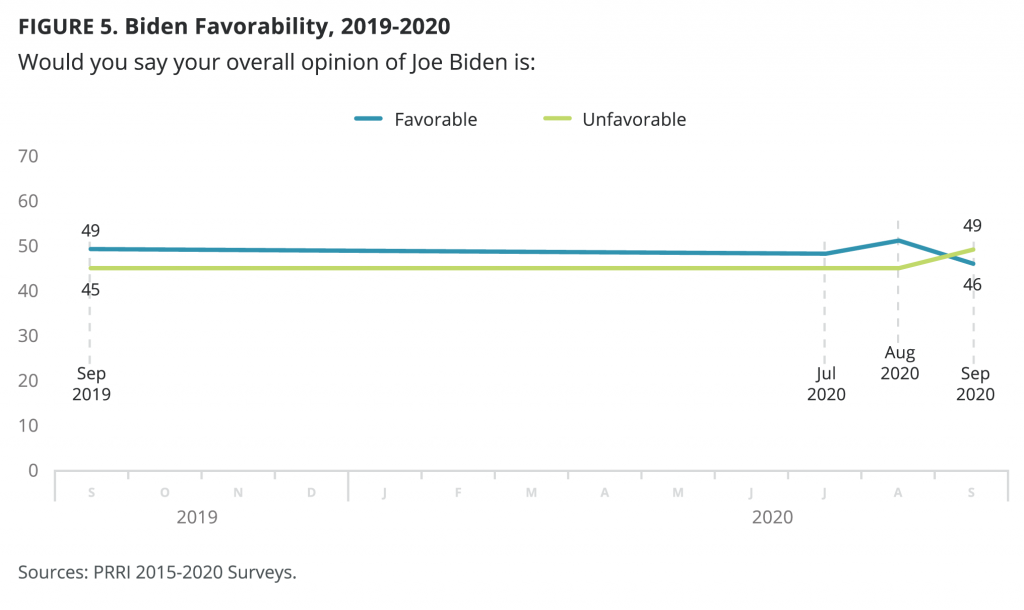 As with Trump, Americans have largely polarized along party lines in their views of Biden. Nearly nine in ten (89%) of Democrats express favorable views of Biden, slightly higher than the 83% of Democrats who said the same in August. Conversely, Republicans are slightly less likely to rate Biden favorably now (11%) than they were in August (18%). Independents (40%) have not shifted significantly since August (44%).

Favorable ratings among Democrats have steadily improved, but Biden has seen the most growth among moderate and conservative Democrats. Ratings among the moderate and conservative members of the party hovered around three in four, before climbing to 86% this month. Biden’s favorability among liberal Democrats has not increased significantly since August, but his numbers have increased steadily from 77% in September 2019 to 93% currently. 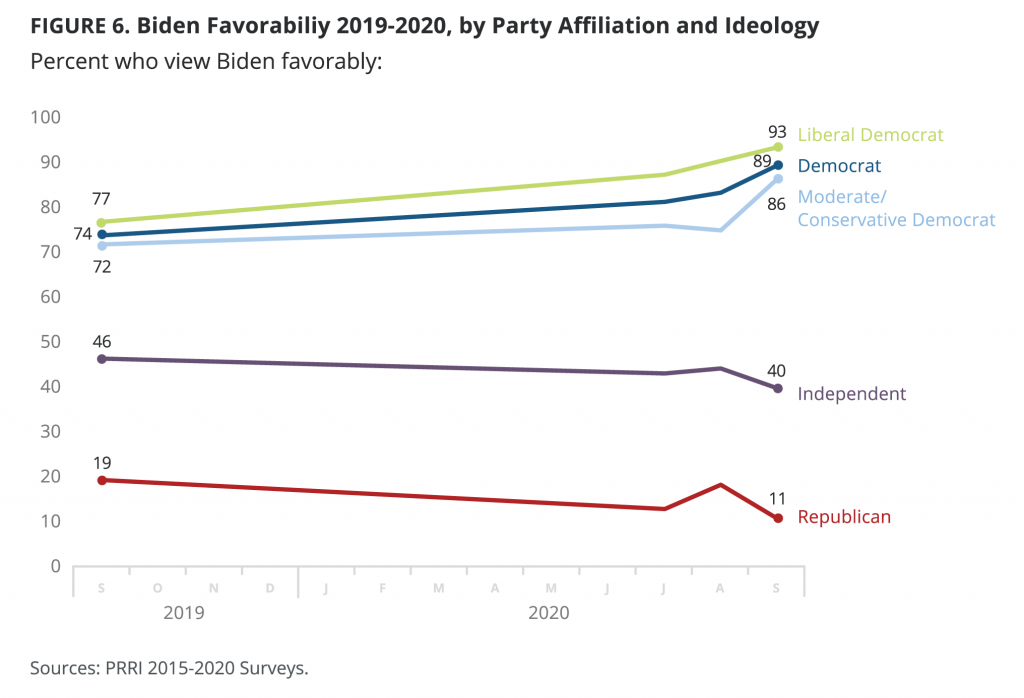 Fewer than four in ten (37%) white Christians hold favorable views of Biden, similar to the 39% of white Christians who said the same in July. White mainline Protestants are twice as likely as white evangelical Protestants to hold favorable views of Biden (44% vs. 22%, respectively). Among white Catholics, 43% currently hold a favorable view of Biden, down significantly from 66% in August but in line with their views in September 2019 (44%). Majorities of nonwhite Protestants (59%) view Biden favorably. Biden’s favorability among religiously unaffiliated Americans has dipped from 54% in August to 47% currently, but this change is not statistically significant.

Biden’s favorability has not shifted much among demographic subgroups. Four in ten (42%) white Americans express favorable views of Biden, compared to 71% of Black Americans and 52% of Hispanic Americans.[3]

Biden’s favorability among white men (36%) and white women (49%) remains similar to levels in August (42% and 53%, respectively) and July (36% and 52%, respectively). White Americans without a four-year college degree also express similar ratings of Biden (38%) as they did in August (42%) and July (35%). White Americans with at least a four-year college degree have trended downwards from 60% in July to 56% in August, to their current 49%, similar to the 52% who rated Biden favorably in September 2019.

Trump and Biden Among White Subgroups

Trump’s reelection chances largely hinge on maintaining support among groups of white Americans that helped him win in 2016. As the final stretch of the campaign plays out, Trump is viewed more favorably than Biden by white men (53% vs. 36%), white Americans without a four-year college degree (49% vs. 38%), and all subsets of white Christians. Notably, Trump’s favorability is higher than Biden’s among white Catholics (54% vs. 43%), a reversal from August when Trump was viewed less favorably than Biden by the group (38% vs. 66%). 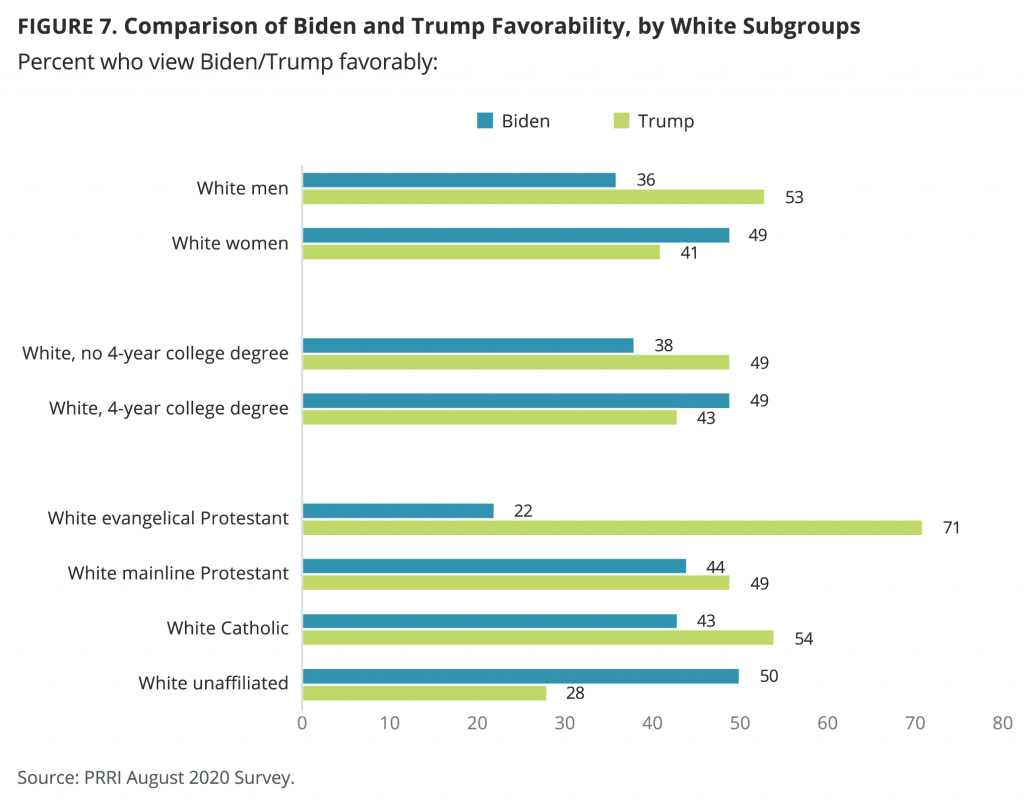 Methodology: The survey was designed and conducted by PRRI. Results of the survey are based on bilingual (Spanish and English) RDD telephone interviews conducted between September 8 and September 16, 2020, by professional interviewers under the direction of SSRS. Interviews were conducted among a random sample of 1,003 adults 18 years of age or older living in the United States (704 respondents were interviewed on a cell phone). The margin of error for the survey is +/- 3.5 percentage points at the 95% level of confidence, which includes the design effect for the survey of 1.3.

[2] Battleground states are Arizona, Florida, Michigan, North Carolina, Pennsylvania, and Wisconsin. These states are listed in the “Toss-up” category by Cook Political Report, as of March 9th. These were the six closest races in 2016. The Cook battlegrounds were updated to only include Arizona, Georgia, Florida, and North Carolina in August, with Michigan, Pennsylvania, and Wisconsin moving to the “lean Democrat” column. Making these changes does not change the numbers above in statistically significant ways, therefore we have kept the original 6 battlegrounds as the closest 2016 states.

[3]  Sample size of Black Americans is n=87. Use caution when interpreting results. 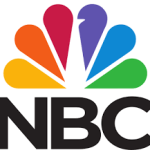 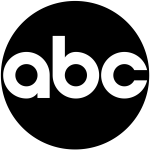 ABC News
For many white evangelicals, the Supreme Court makeup solidifies their support for President Trump