Americans continue to hold more negative than positive views of President Donald Trump. Half (50%) of the public have an unfavorable view of Trump, while roughly four in ten (43%) report having a favorable impression of him. Despite a tumultuous first month in office, public views of Trump have not shifted significantly from the previous month. In January, a similar percentage (52%) expressed an unfavorable opinion of the newly elected president while approximately four in ten (43%) had a positive opinion of him.

At this point in his presidency, Trump is far less popular than his immediate predecessors. In early 2001, two-thirds (67%) of the public had a favorable view of former President George W. Bush, despite a contentious election that ended with a Supreme Court ruling.1 Similarly, former President Barack Obama had strong support among the public in the first few months of his presidency, with roughly seven in ten (69%) expressing a favorable view of him.2 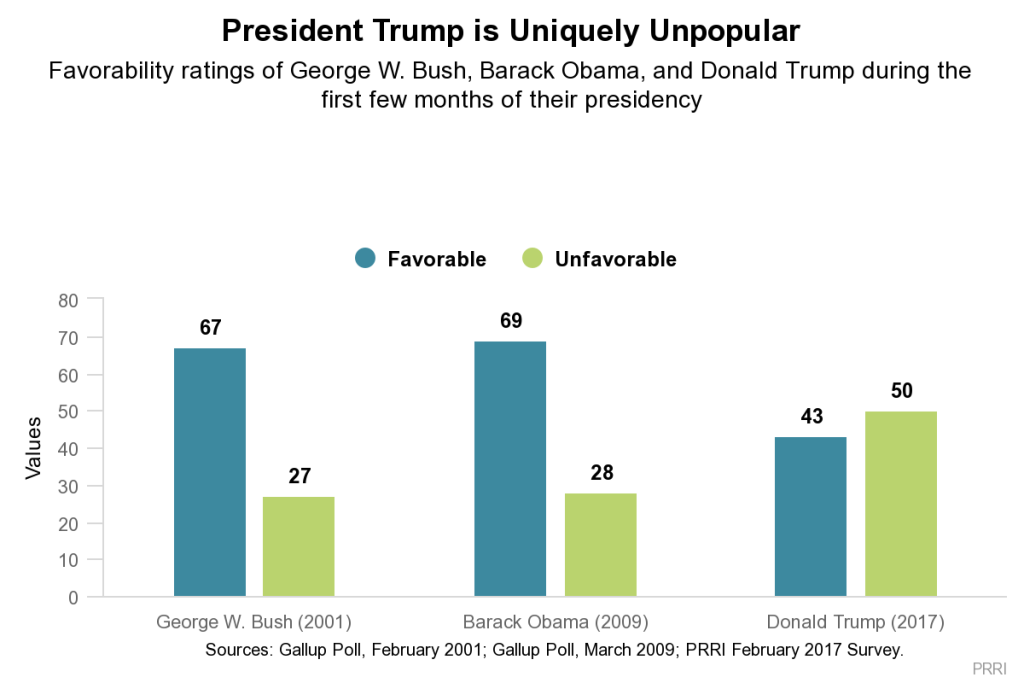 Attitudes about Trump vary considerably by religion with white Christian groups reporting much warmer feelings than other Americans. A majority of white evangelical Protestants (74%), white Catholics (55%), and white mainline Protestants (53%) view Trump favorably. In contrast, fewer than one-third of non-white Protestants (31%), religiously unaffiliated Americans (31%), members of non-Christian religions (26%), and Hispanic Catholics (25%) report a positive view of Trump. No religious group views the current president more negatively than Americans who belong to non-Christian traditions—a group that includes Jews, Muslims, Buddhists, Hindus, and others—more than seven in ten (71%) have an unfavorable opinion of Trump.

Views of Trump also differ sharply by race and ethnicity. White Americans (52%) have much more favorable views of Trump than Hispanics (29%) or blacks (14%). Eight in ten (80%) black and more than six in ten (62%) Hispanic Americans have an unfavorable view of Trump. There are, however, substantial class divisions among whites. Six in ten (60%) white Americans without a college degree view Trump favorably, compared to only 39% of whites with a four-year college degree.

Trump is considerably less popular among young adults than he is among older Americans. Only about one-third (32%) of Americans under the age of 30 view Trump favorably, compared to nearly half (49%) of seniors (age 65 and older). More than six in ten (62%) young adults have an unfavorable opinion of Trump.

Violations to the Constitution & Impeachment

Country Divided on Whether Trump has Violated the Constitution

Nearly half (47%) of the public believe Trump has acted in ways that violate the U.S. Constitution. Roughly as many (46%) say that he has not.

The country is sharply divided along political lines. Roughly eight in ten (79%) Democrats, but only about one in ten (11%) Republicans, believe Trump has violated the Constitution. Political independents, like the public overall, are closely divided in their views, with 44% saying he has and 49% saying he has not. 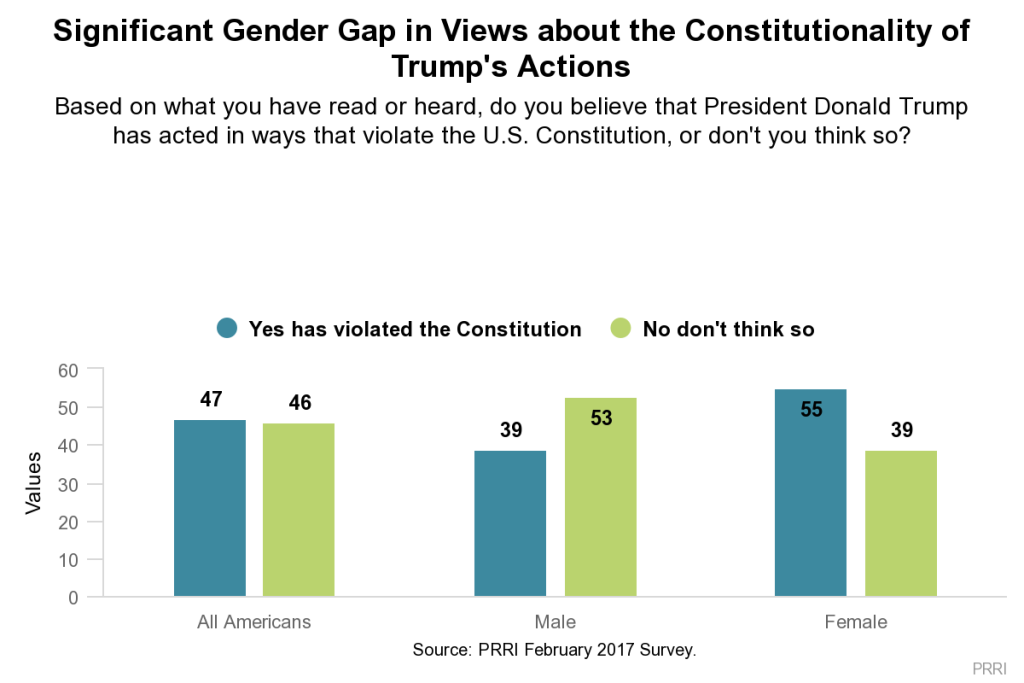 The racial divide on this issue is equally stark. Three-quarters (75%) of black Americans and more than six in ten (62%) Hispanics say Trump’s actions have been unconstitutional, while only 38% of whites agree. A majority (56%) of whites say Trump has not violated the Constitution. There are important differences among whites by class. Close to half (46%) of whites with a four-year college degree believe Trump has acted in ways that violate the Constitution, compared to roughly one-third (32%) whites without a college degree. More than six in ten (63%) whites without a college education say that Trump has not violated the Constitution.

Young adults are more likely than seniors to believe Trump has violated the Constitution (58% vs. 43%, respectively). More than half (51%) of seniors say Trump’s actions have not run afoul of the Constitution.

Despite concerns about unconstitutional actions, relatively few Americans believe Trump should be subject to impeachment proceedings. Three in ten (30%) Americans say Trump should be impeached and removed from office, while nearly two-thirds (65%) disagree. Notably, a similar number of Americans supported the impeachment of Barack Obama (29%) and George W. Bush (30%), although at a much later date in their presidencies.3 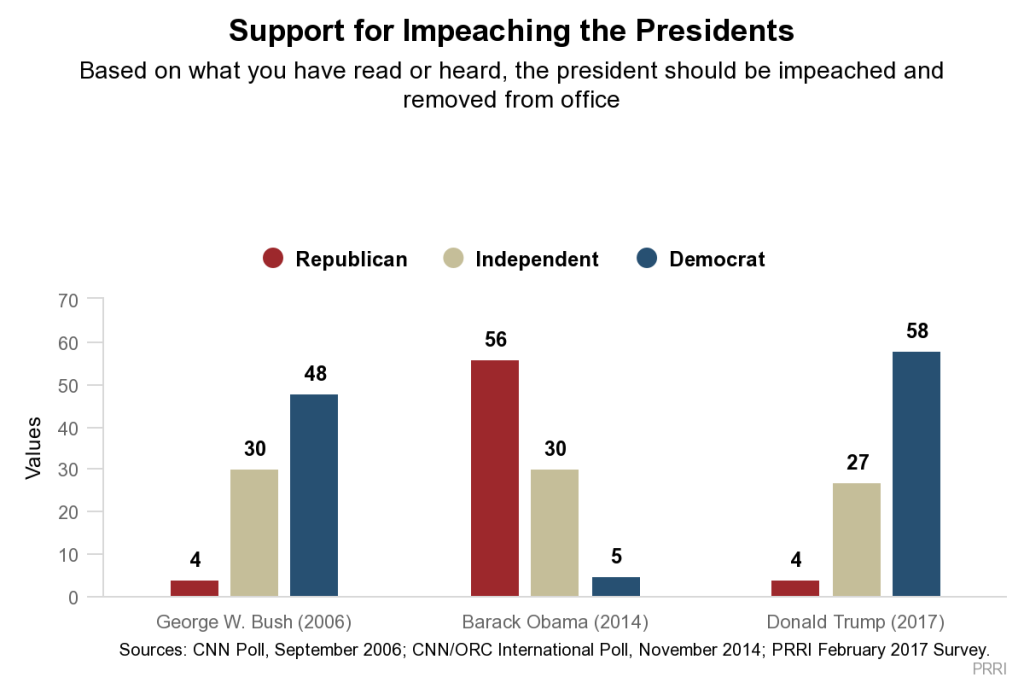 The racial divide is also evident in views about impeachment. Six in ten (60%) blacks and close to half (47%) of Hispanics say Trump should face impeachment, a view held by only 21% of whites. Importantly, there is no class divide among whites with relatively few whites without a college degree (19%) and whites with a college education (24%) expressing support for impeachment.

There is a modest gender gap in views about impeachment. Women are somewhat more likely than men to say Trump should face impeachment (35% vs. 26%, respectively). Strong majorities of both women and men oppose impeaching the president (59% vs. 70%, respectively).

Overall, Americans are more likely to believe Democrats in Congress have been too partisan in their early opposition to Trump’s appointments than to say they are correctly representing views of the public who did not vote for him (48% vs. 35%, respectively). Close to one in five (17%) Americans offer no opinion about Democratic opposition to Trump. Shortly after the election of George W. Bush, the public was slightly more divided. About four in ten (44%) said Democrats in Congress were acting too partisan, while 40% said they were correctly representing the public that did not support Bush.4

Compared to 2001, Republicans today are significantly more likely to say that early Democratic opposition has been too partisan (79% vs. 66%, respectively). Democrats express nearly identical views at both time periods. Fewer than three in ten (27%) Democrats currently believe congressional Democrats are behaving in a too partisan manner; nearly the same number said so in 2001 (29%). 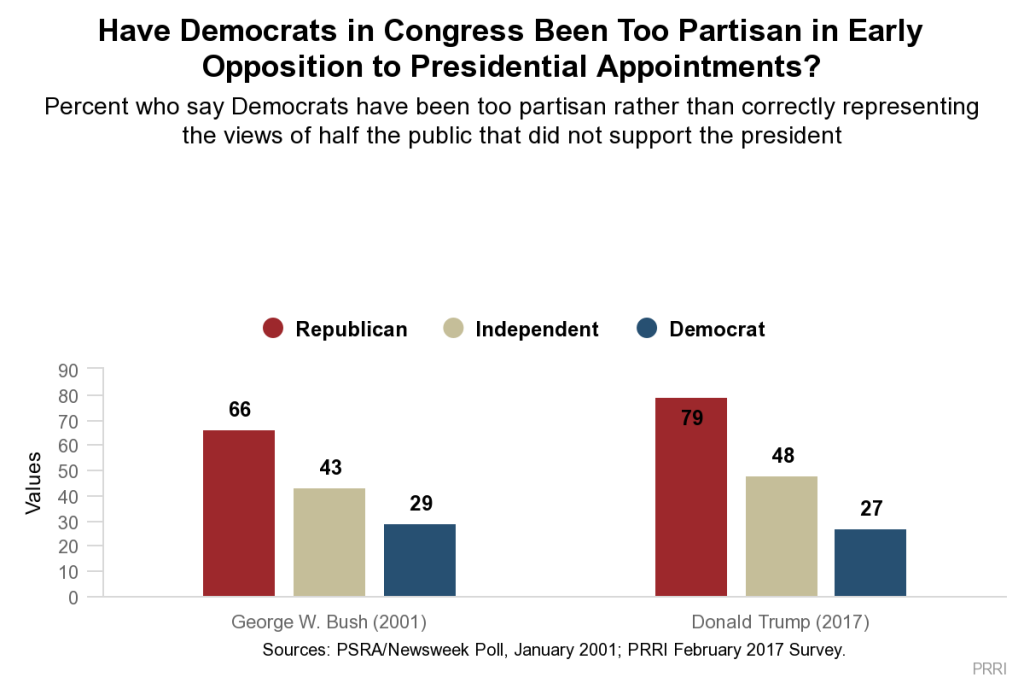 Only about one-third (35%) of the public favor temporarily banning Muslims from other countries from entering the U.S. Roughly six in ten (59%) Americans oppose the ban. Views have been roughly stable since spring 2016 when a similar number (58%) of Americans expressed opposition to the ban.5

There is solid support for this policy among Republicans, but it is overwhelmingly rejected by both Democrats and independents. Roughly two-thirds (65%) of Republicans favor a temporary Muslim travel ban, compared to only 36% of independents and 10% of Democrats. Democratic opposition to the Muslim travel ban has hardened since last spring. Eighty-seven percent of Democrats now oppose such a ban, a 13 percentage-point increase from 74% in 2016. Perhaps more importantly, the number of Democrats who strongly oppose the ban increased more than 20 percentage points—from 36% to 59%.

White evangelical Protestants are the only religious group in which a majority support a temporary Muslim travel ban. More than six in ten (61%) white evangelical Protestants favor banning Muslims temporarily from coming to the U.S., compared to 55% who supported this policy in 2016. Fewer than half of white Catholics (44%) and white mainline Protestants (39%) favor the ban today, while a majority of each group (52% and 51%, respectively) reported favoring it last year. Fewer than one-third of non-white Protestants (27%) and religiously unaffiliated Americans (21%) favor such a ban. 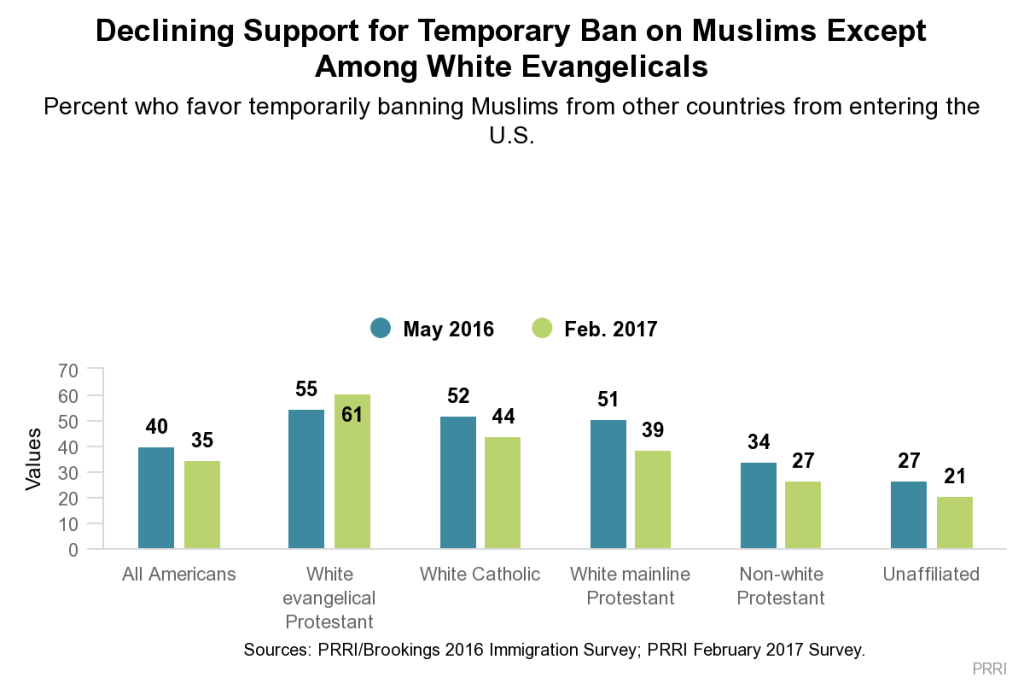 Religion News Service
Support for Muslim ban up among white evangelicals
Related Research
The Divide Over America’s Future: 1950 or 2050? Findings from the 2016 American Values Survey
Nearly One in Five Female Clinton Voters Say Husband or Partner Didn’t Vote | PRRI/The Atlantic Post-election Survey
Thanks for signing up!