As the country becomes more diverse and less religiously affiliated, Americans are divided over whether it is more appropriate for stores and businesses to greet customers with “Happy Holidays” or “Seasons Greetings” instead of “Merry Christmas” out of respect for people of different religious faiths: 47% say they should, while 46% say they should not. Attitudes on this question are largely unchanged over the last six years. This issue sharply divides the public by political affiliation, religious affiliation, and age.

Democrats are more than twice as likely as Republicans to say that stores should use more general greetings such as “Happy Holidays” (66% vs. 28%, respectively). Two-thirds (67%) of Republicans say stores and businesses should greet their customers with “Merry Christmas.” Political independents are about evenly divided with 44% preferring “Happy Holidays” and 48% preferring “Merry Christmas.” 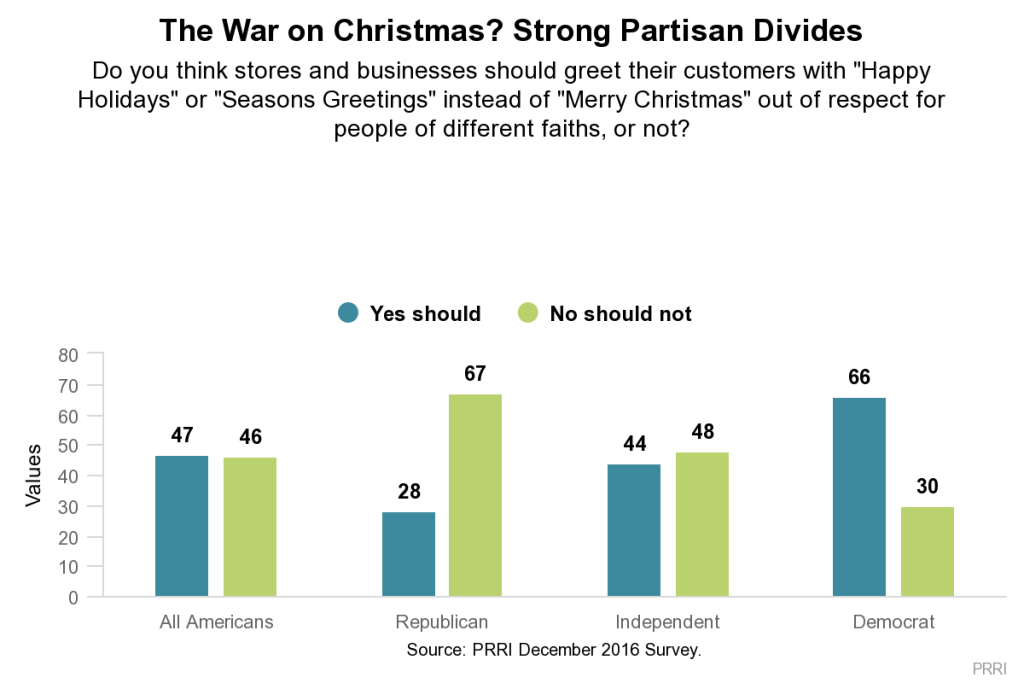 Two-thirds (67%) of young adults (age 18-29), compared to only 38% of seniors (age 65 and older), say it is better for businesses to greet customers with “Happy Holidays” as opposed to “Merry Christmas.” A majority (54%) of seniors say stores should greet patrons with “Merry Christmas” during the holiday season.

Is Christmas Becoming a Cultural Holiday? 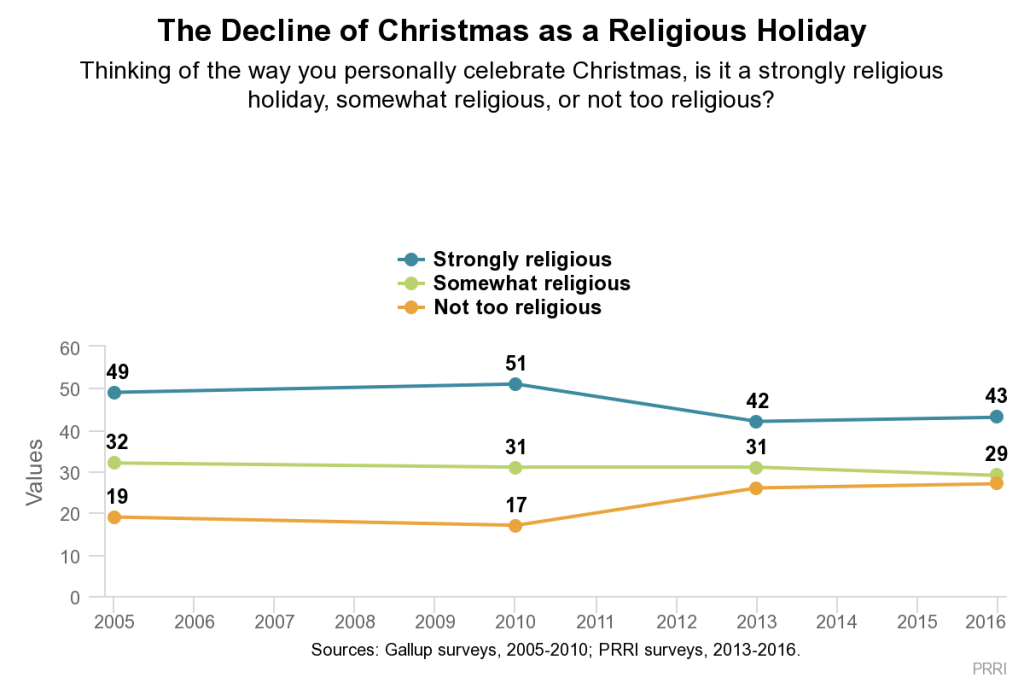 Younger Americans are also more likely than older Americans to celebrate Christmas as a cultural holiday. A majority (52%) of seniors compared to only 30% of young adults are who celebrate the holiday say it is strongly religious for them. Conversely, young adults are about twice as likely as seniors to say it is not a religious holiday for them (36% vs. 17%, respectively).

Family, Politics and the Holidays

Talking About Politics with Family

Nearly six in ten (58%) Americans with a college education say they talk about politics with their family often, compared to only one-third (33%) of those with a high school education or less.

Despite the contentious nature of the 2016 presidential election, only 16% of Americans report that their family argued about politics or the election over the Thanksgiving holiday. However, the likelihood of disagreement varied across different families.

Roughly one in five Democrats (18%) and independents (18%) say there were family disagreements about politics over the Thanksgiving holiday, compared to 12% of Republicans. The political divide is wider among those who talk with their families about politics at least sometimes.

Young adults are also more likely to report a quarrelsome Thanksgiving holiday than older Americans. More than one in five (21%) young adults say their families fought about politics compared to only 10% of seniors.

Only 13% of the public say they blocked, unfriended, or stopped following someone on social media because of what they posted about politics. Again, sharp political divisions emerged in the tendency to remove people because of the political opinions they expressed.

Nearly one-quarter (24%) of Democrats say they blocked, unfriended, or stopped following someone on social media after the election because of their political posts on social media. Fewer than one in ten Republicans (9%) and independents (9%) report eliminating people from their social media circle.

Political liberals are also far more likely than conservatives to say they removed someone from their social media circle due to what they shared online (28% vs. 8%, respectively). Eleven percent of moderates say they blocked, unfollowed, or unfriended someone due to what they posted online. 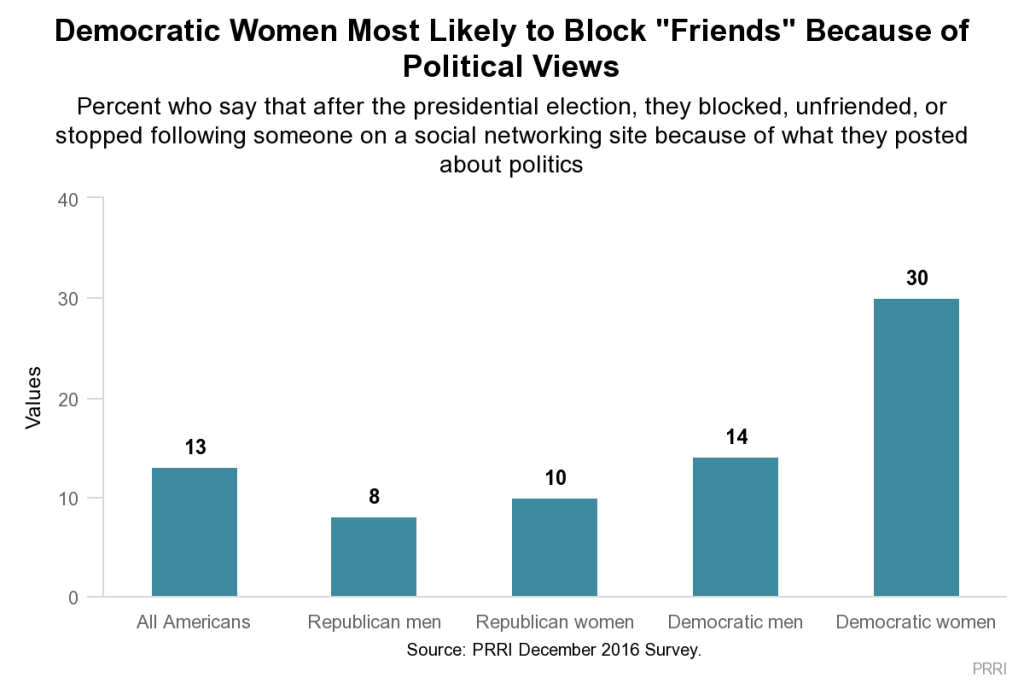 There is also a substantial gender gap. Women are twice as likely as men to report removing people from their online social circle because of the political views they expressed online (18% vs. 9%, respectively). Notably, the gender gap also differs significantly across political affiliation. Three in ten (30%) Democratic women say they removed an individual from their online social network because of a political opinion they expressed, while only 14% of Democratic men reported doing this. Republican men and women are about equally as likely to say they blocked, unfollowed, or unfriended someone on social media because of political posts (10% vs. 8%, respectively).

1All references to those celebrating Christmas in 2016 also include those who say they are celebrating Advent. 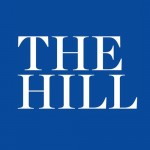