President Joe Biden met with Pope Francis in late October, the first time in more than half a century that a Catholic American leader met with the head of the Catholic Church at the Vatican. The meeting took place under heavy criticism from conservative bishops in the United States who want to deny Biden communion over his stance on abortion. Biden noted after the meeting that the Pope said he should continue to receive communion, and the Vatican released a statement indicating that the two men discussed “the joint commitment to the protection and care of the planet, the health care situation and the fight against the Covid-19 pandemic, as well as the theme of refugees and assistance to migrants.”

Newly released data from PRRI’s 2021 American Values Survey shows that about one in five Americans (22%) identify as Catholic, including 13% who identify as white Catholic and eight percent who identify as Hispanic Catholic, as well as a small proportion of other Catholics of color, percentages that have remained generally stable since 2010. 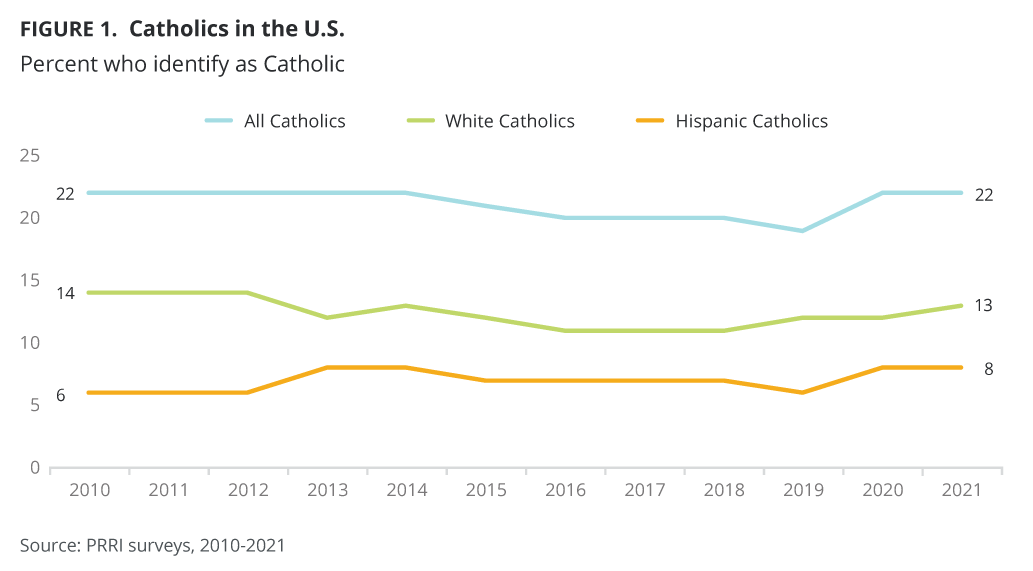 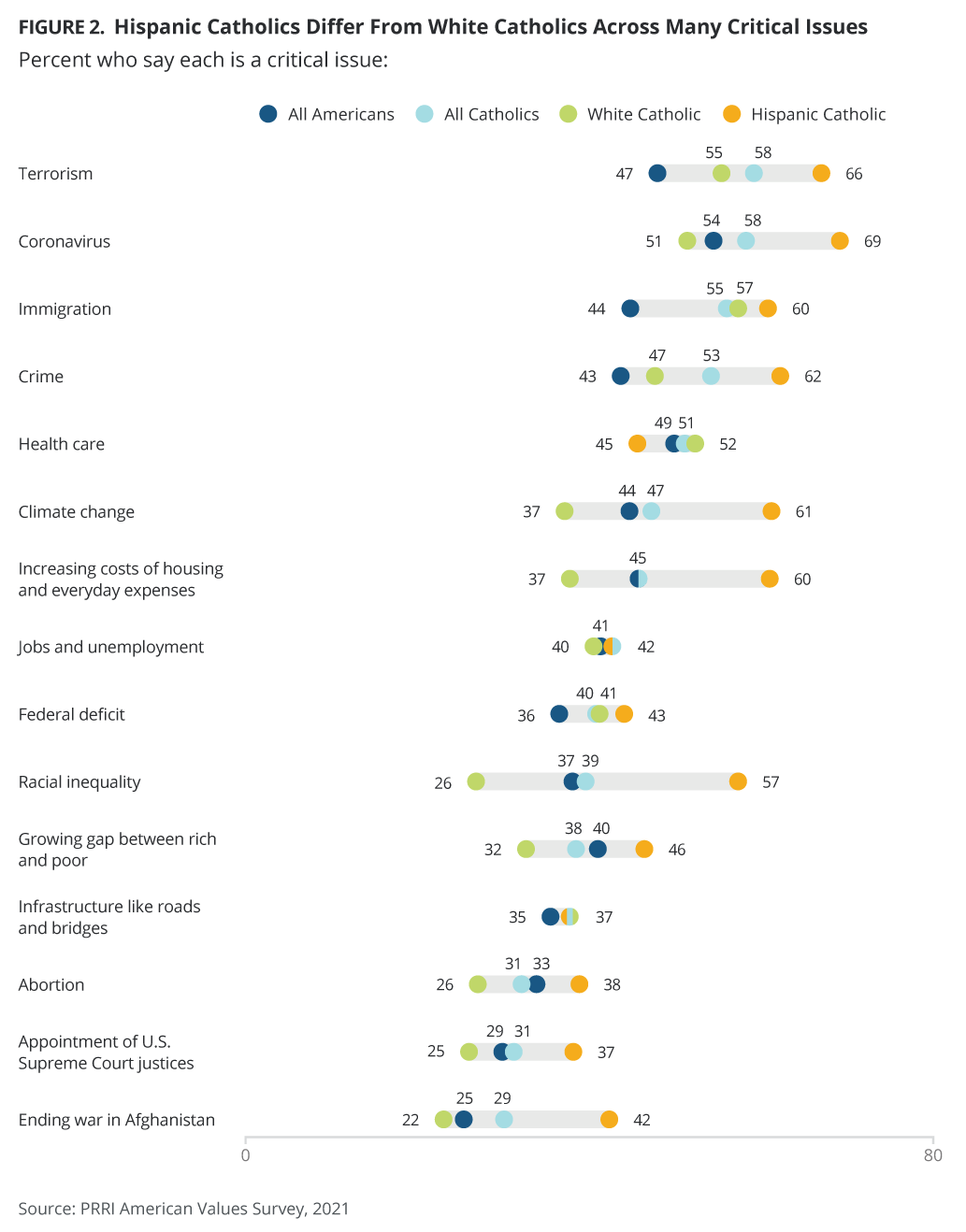 Views of Joe Biden as President

With the exception of immigration and the economy, majorities of Catholics approved of the job Joe Biden is doing as president as of late September, but the gap between white Catholics and Hispanic Catholics is substantial. Hispanic Catholics are considerably more likely than white Catholics to approve of the job President Biden is doing, including handling the COVID-19 pandemic (73% vs. 48%), the job Biden is doing as president (72% vs. 38%), his decision to withdraw American troops from Afghanistan (66% vs. 42%), handling the economy (66% vs. 38%), and handling immigration (52% vs. 28%). 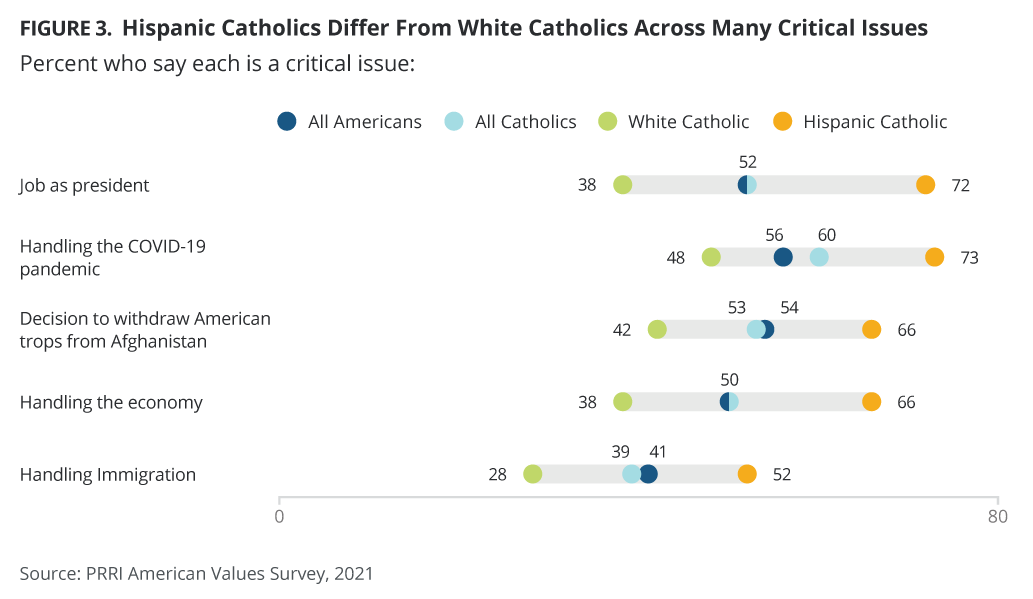 Even though majorities of Catholics (67%) disagree with the statement “In my lifetime, I believe it is likely that no one will be able to get a legal abortion in the U.S.,” white Catholics are notably more likely to do so than Hispanic Catholics (74% vs. 56%). 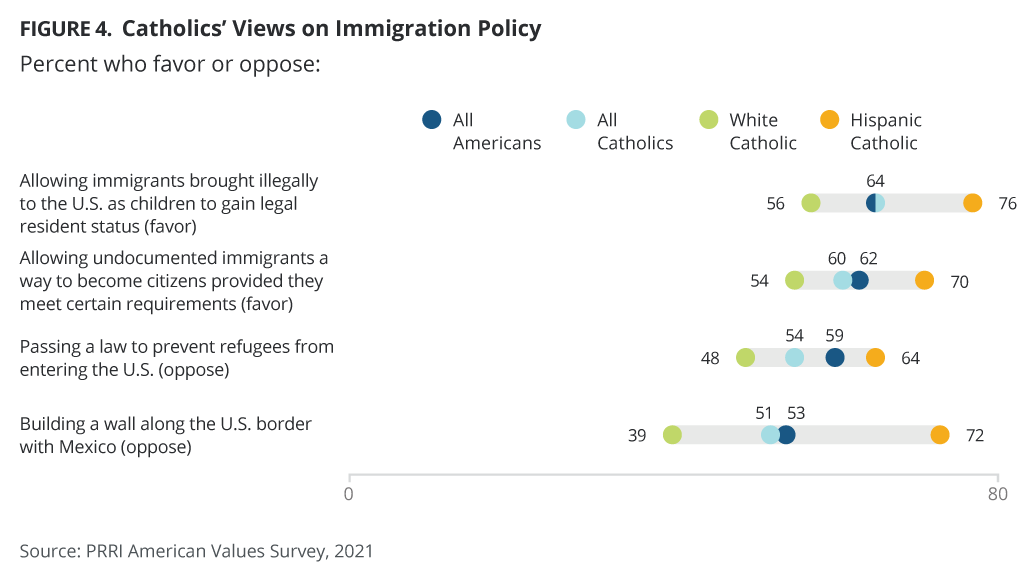 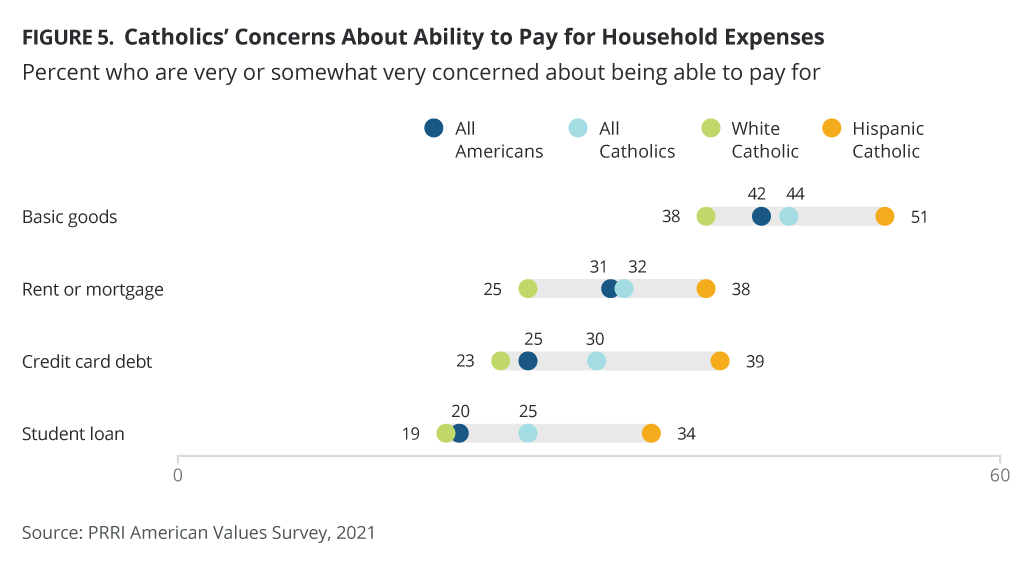 [1]Some questions regarding critical issues in the 2021 American Values Survey were only asked of half the sample. Because of this, the sample size for Hispanic Catholics for some of these questions is 72. The differences reported here are for those significant at the 0.05 level. However, differences are significant at the .10 level: Hispanic Catholics are more likely than white Catholics to say that the growing gap between rich and poor (46% vs. 32%) and the appointment of U.S. Supreme Court justices are critical issues.

Related Research
U.S. Hispanic Beliefs About Policy, Pluralism, and the Future of the Country
Dueling Realities: Amid Multiple Crises, Trump and Biden Supporters See Different Priorities  and Futures for the Nation
Thanks for signing up!
Tweet
Tweet
Tweet