The religiously unaffiliated are a growing political constituency on both sides of the aisle. What do they want from politics?

One of the most dramatic social changes in the United States over the past 30 years has been the growing number of Americans with no religious affiliation, now nearly a quarter of the U.S. population. They are a key part of the Democratic Party’s base, with a slew of books studying them, advocacy groups representing them, and even a new media initiative speaking to them. Understanding this cultural change in the American religious landscape is important for understanding the future of politics amid major demographic shifts.

When we talk about the growth of the unaffiliated, we often tell a story about culture wars and political progressives. Research shows that a major factor driving this growth is the political backlash among liberal and progressive Americans to the organizing efforts of the religious right in the 1980s and 1990s. Because people tend to establish their political views before their religious views solidify later in life, liberal politics tend to lead the choice to select out of religious participation, and so it is easy to assume that this group is just a key part of the Democrats’ political coalition.

Part of that story is absolutely true, but this group is growing and changing quickly, highlighting some big problems with that narrative. Diving into past research and survey data can help to update our story about the unaffiliated with three key facts.

Fact 1: The unaffiliated are a big group, and they aren’t all atheists.

First, the old story mainly focuses on the so-called “activist seculars” among the unaffiliated—atheists, agnostics, and people who are deeply engaged in the work of politics. That profile tends to miss, or even disregard, people who drift away from religion and never return, people who choose other unaffiliated identities, prefer to be spiritual but not religious, or what researchers call “unchurched believers” who change their religious affiliations over time. Once you get to a quarter of the U.S. population, you are dealing with a large group of people who are more centrist—and more politically disengaged—than you might expect. 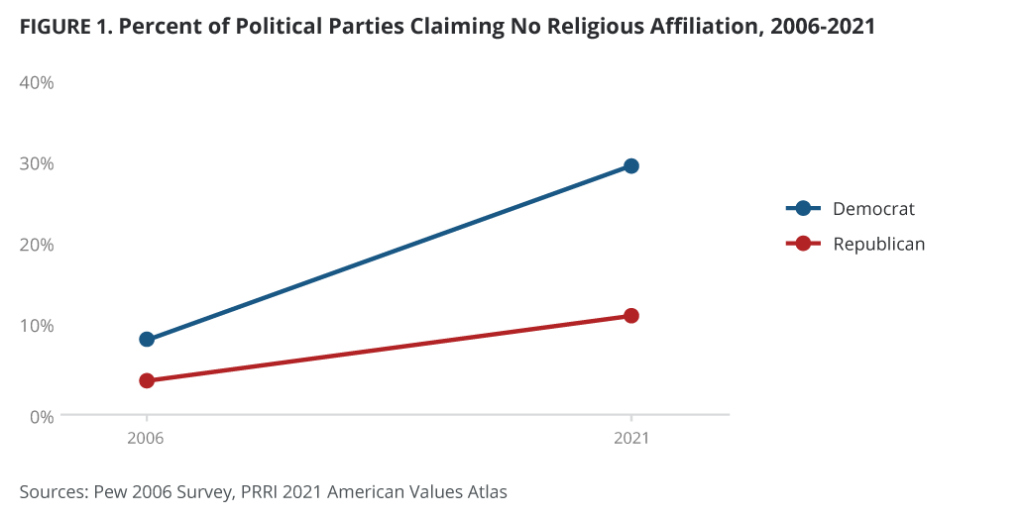 The implications of this change are not yet clear. It may be that Republican partisans are becoming more untethered from religious institutions, and therefore more likely to invest in other forms of public religion, such as Christian nationalism. Or it may be the case that a new generation of younger Republican partisans will have religion less integrated into their political belief systems than their older counterparts. Either way, researchers and pundits would do well to remember that not all unaffiliated Americans are progressives or center-left Democrats.

Fact 3: Unaffiliated Americans may not want what politicians think they want.

The 2021 PRRI American Values Survey (AVS) included questions about a variety of policy issues, asking respondents whether they thought each was a “critical issue,” “one among many important issues,” or “not that important an issue.” Using this battery, we can focus less on partisanship along a left-right spectrum and more on which issues the unaffiliated prioritize. 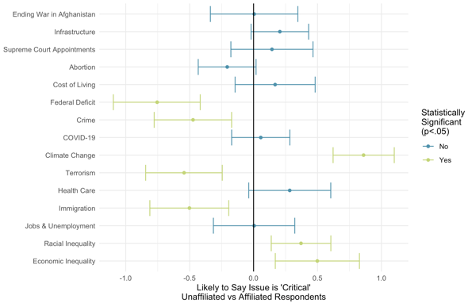 What is most striking about these 2021 issue preferences is the way they do not conform to conventional expectations about this group. We don’t typically think of the unaffiliated as an environmental group, and if one believes in theories about culture wars, we would expect them to be more concerned about the separation of church and state with regard to abortion and appointing Supreme Court justices. In these results, they are no more likely than religiously affiliated respondents to name these as “critical issues.” These results show that other concerns, like environmental protection and infrastructure spending, might be key emerging issues on which leaders can appeal to the unaffiliated as a constituency.

As Democrats continue to try to motivate their base and other political groups try to broaden their constituencies, these results show that we have much more to learn about the broad and diverse section of unaffiliated Americans and voters.