The White House is preparing to redirect Justice Department resources toward investigating universities over “race-based discrimination” against white applicants. Recent PRRI polling reveals stark divides on who faces discrimination in the U.S. today. 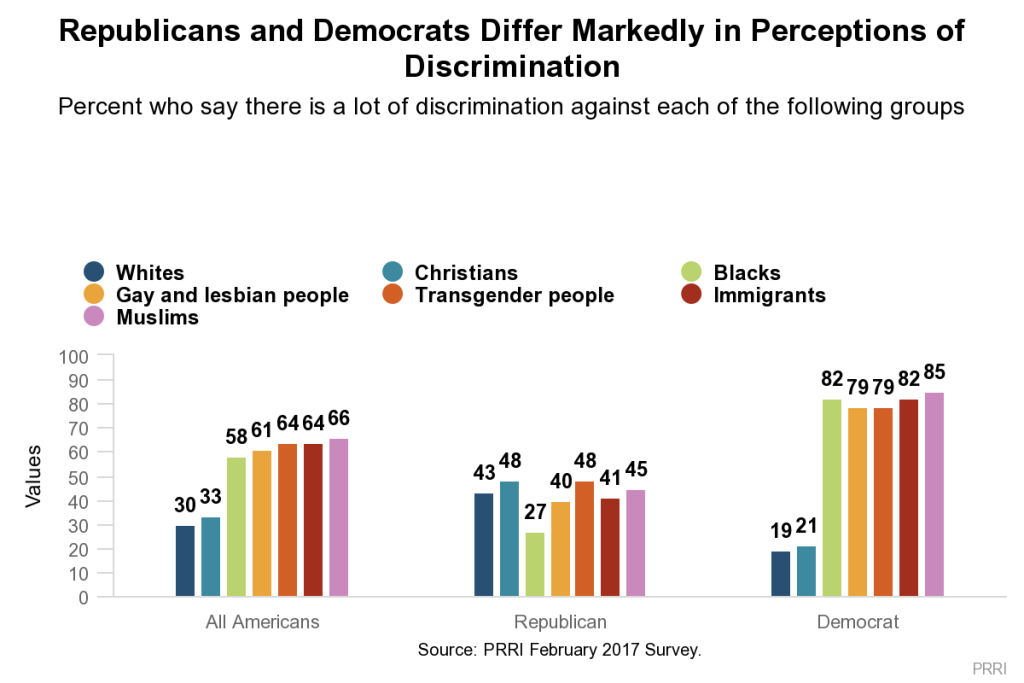 Racial, ethnic, and class divides on this issue follow expected patterns. Nearly nine in ten (87 percent) black Americans say black people face a lot discrimination, but only 19 percent say the same is true of whites. Approximately half (49 percent) of whites say blacks face discrimination, while just over one-third (34 percent) say the same of whites. Class divisions among whites are notable. While whites with a college degree mirror the population overall, whites without a college degree are about equally as likely to believe that blacks (44 percent) and whites (39 percent) face a great deal of discrimination. Hispanics do not differ substantially from the general population on this issue.

Notably, Republicans are significantly more likely to say whites, rather than blacks, experience a lot of discrimination in the U.S. today (43 percent vs. 27 percent, respectively). Democrats and independents are far more likely to say blacks experience a lot of discrimination than to say the same about whites (82 percent vs. 19 percent and 59 percent vs. 30 percent, respectively). The partisan gap in perceptions of discrimination against blacks has increased substantially over the last four years, driven primarily by shifts among Democrats. In 2013, about two-thirds (66 percent) of Democrats compared to roughly one-third (32 percent) of Republicans expressed the view that discrimination against blacks in the U.S. is common. Notably, white and nonwhite Democrats recorded nearly identical changes in opinion.