On May 14, 2022, a white supremacist terrorist shot 13 people, killing 10, in a supermarket in Buffalo, New York, a location specifically chosen because of its large share of Black customers. The killer claimed that he was motivated by a right-wing conspiracy belief known as “replacement theory.” This ideology—which claims that white Christian Americans are under threat by Black and other people of color, non-European immigrants, and non-Christians—has a long history in various expressions of white supremacy throughout American history.

While these ideas have circulated among fringe groups in the past, PRRI data from August 2021 finds that belief in replacement theory is no longer fringe among a range of conservative subgroups. Americans who most trust conservative media outlets like One America News Network or Newsmax (80%) or Fox News (67%) are the most likely subgroups to agree with the statement that, “Immigrants are invading our country and replacing our cultural and ethnic background.” Additionally, 65% of QAnon believers and 60% of Republicans agree with the replacement theory statement, compared to just one in ten Democrats (11%) and one in four independents (26%). Among religious groups, half (50%) of white evangelical Protestants agree with these replacement fears.

Additionally, support for Christian nationalism is strongly correlated with a belief in replacement theory. Among Americans who agree that, “God intended America to be a new promised land where European Christians could create a society that could be an example to the rest of the world,” a majority (55%) also agree with replacement theory rhetoric (55%). 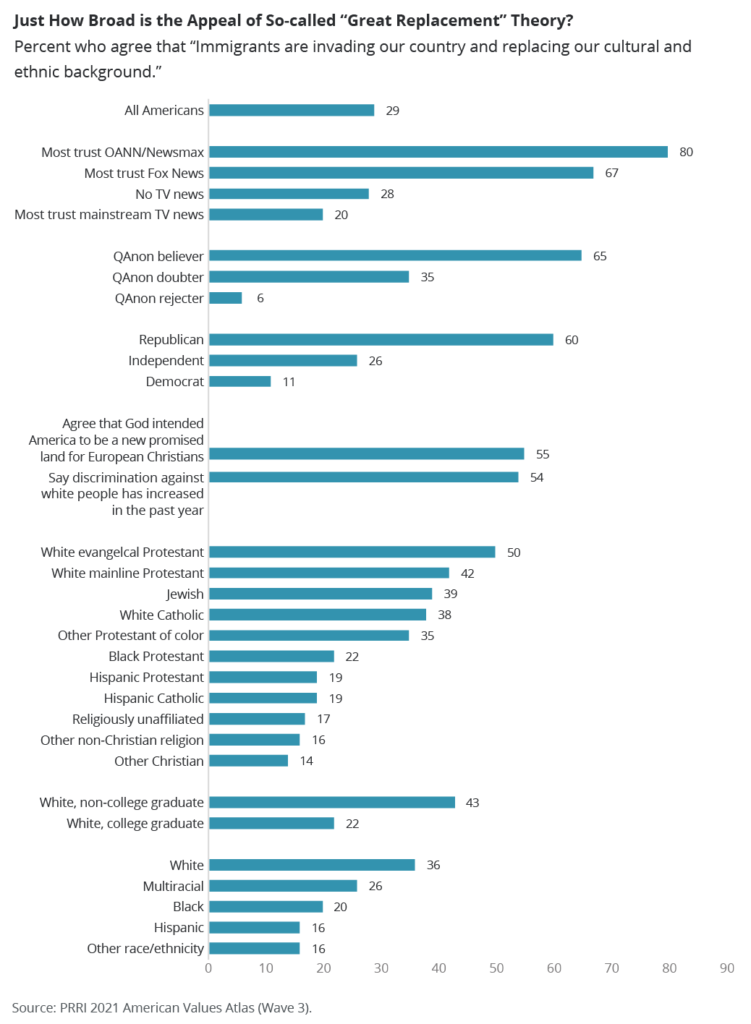 Related Research
Dramatic Partisan Differences on Blame for January 6 Riots
Why We Divide Republicans by Media Trust: The OAN/Newsmax Effect
Thanks for signing up!
Tweet
Tweet
Tweet