In PRRI’s major reports throughout 2021, we have started differentiating Republicans by which media outlet they trust most among a set of television news sources, including categories for Fox News, far-right media, and mainstream media. These categories came about organically, as a result of spending time digging into the data, during which we noticed that Republicans seem to be unique in their deep divisions by media source. Additionally, Republicans’ most trusted sources have shifted substantially over the past year. This post explains how we have developed the categories among Republicans, as well as what we see when we look at media trust among independents and Democrats. 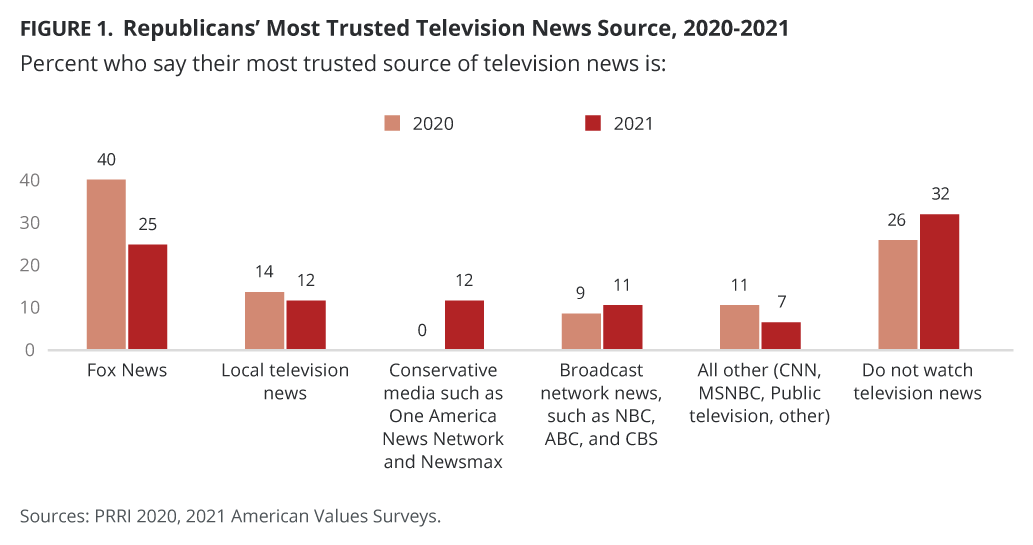 PRRI has used the same question to measure television media use since 2010: “Which of the following television news sources do you trust the most to provide accurate information about politics and current events?” The base answer options presented are: “Broadcast network news, such as NBC, ABC, or CBS,” “CNN,” “Fox News,” “MSNBC,” “Local television news,” “Public television,” “Other” (with an opportunity to say or type in the source), and “Do not watch television news.” From 2010 to 2015, an answer option was also included for “Comedy Central’s ‘The Daily Show With Jon Stewart.’” In 2016, the option was edited to “‘The Daily Show’ or ‘Last Week Tonight With John Oliver,’” but it was dropped completely after 2016.

In the electoral environment of 2020, we took a closer look at the question among partisans and found large, consistent differences between Republicans who chose Fox News as their response and Republicans who chose any other option. We did not see this type of relationship happening among, for example, Democrats who chose MSNBC over any other news source. Our November 2020 report summarized those findings, which highlighted that 40% of Republicans said they most trusted Fox News in our October 2020 American Values Survey.

In a March 2021 survey, the proportion of Republicans who chose Fox News dropped to 27% and the proportion of “other” responses increased from 4% in late 2020 to 11%. When we looked at the answers that were given as “other” options, there was a marked increase in people saying the television news they trusted came from One America News Network and Newsmax, plus a handful of other far-right media sources. The difference between October and March was profound: 19 people (of 2,538) wrote in a far-right news source in October 2020, and 177 people (of 5,625) did so in March 2021.

This data told us that our categories no longer adequately captured media habits, but adding a new response category to a question poses a challenge: Simply by presenting the option, we could end up with a lot more people choosing it (the power of suggestion), which in this case would be likely to pull respondents away from Fox News and into the additional category. In August, we ran an experiment: A random half of the sample got the television media question as it had been asked, and the other random half got the question with the added answer option “Conservative media, such as One America News or Newsmax.”

The experiment worked precisely as intended. The portion of the sample that got the original question continued to write in those far-right media outlets, and the portion that got the question with the added answer option used that answer option instead of writing it in. In the original question, 3% provided a far-right media answer, and in the new question, 5% chose the conservative media option. There was no significant difference in the proportion of respondents who chose Fox News across the two sample halves (11% vs. 10%) or on any other answer option. Based on this data, we decided to add the answer response for OAN and Newsmax to our polls moving forward. 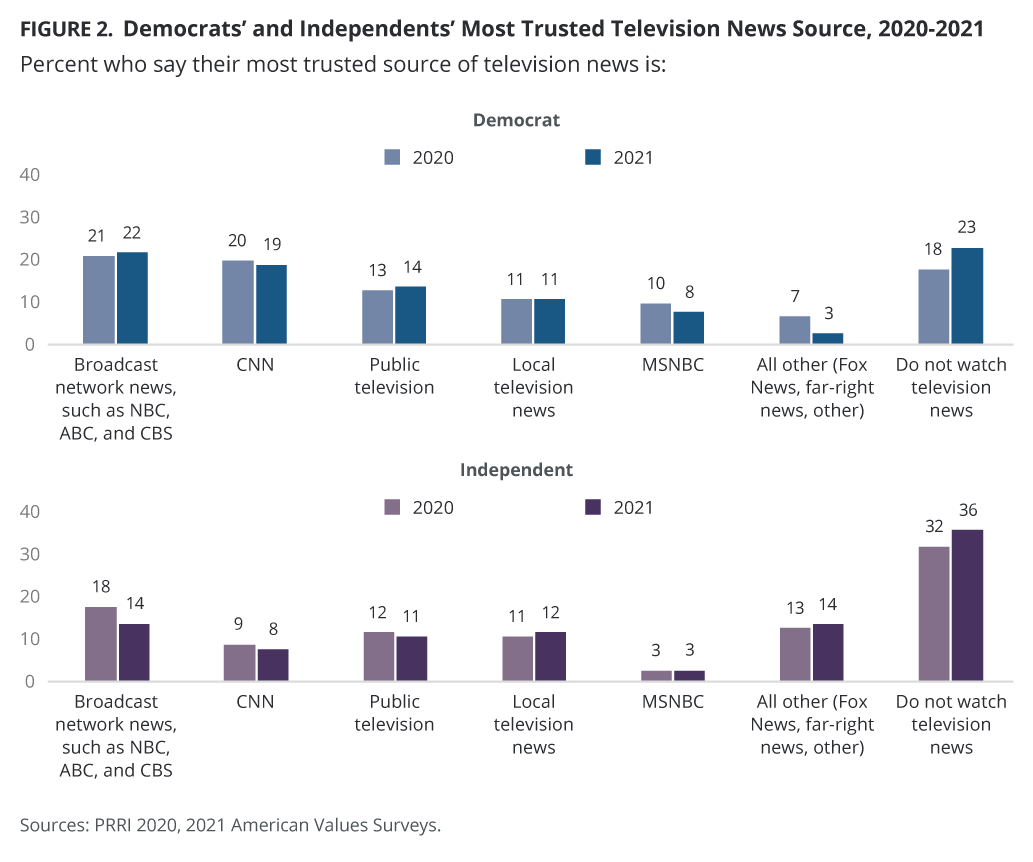 As for Democrats, there were no significant differences in their answers to the television news trust question over the past year, nor have we seen the same consistent divides in opinions by media use.[1] For example, in the 2021 American Values Survey, we noted substantial gaps between Republicans who trust far-right news and Fox News compared to all Republicans on agreement with a series of statements about threats to culture in the United States, but these relationships do not appear consistently on the Democratic side between media sources.[2] Democrats who most trust public television differ on one item, but not others. 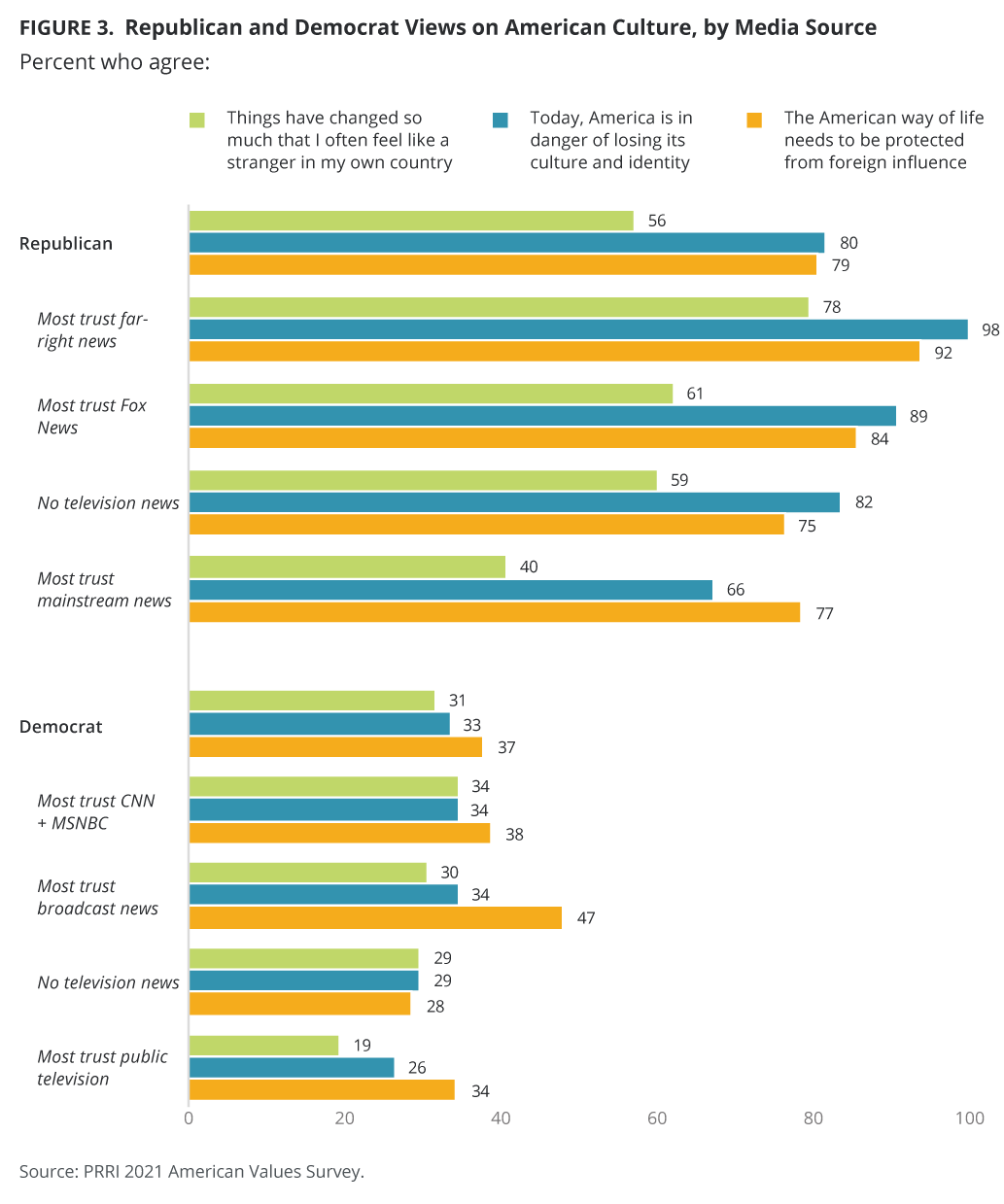 Comparing a few different types of questions on which one would expect Democrats to differ, we still do not see consistent gaps between television sources. On President Biden’s job approval and questions about police killings, immigrants, and voter fraud, the Republican side is consistent: Those who trust Fox News and far-right news have the most extreme views. On the Democrat side, not only are the gaps much smaller between news sources — in most cases not reaching statistical significance — but no one source consistently shows the most one-sided responses.

We will continue to monitor media habits among all Americans, but as of now, the added insight comes from dividing Republicans by trusted news source, not Democrats. 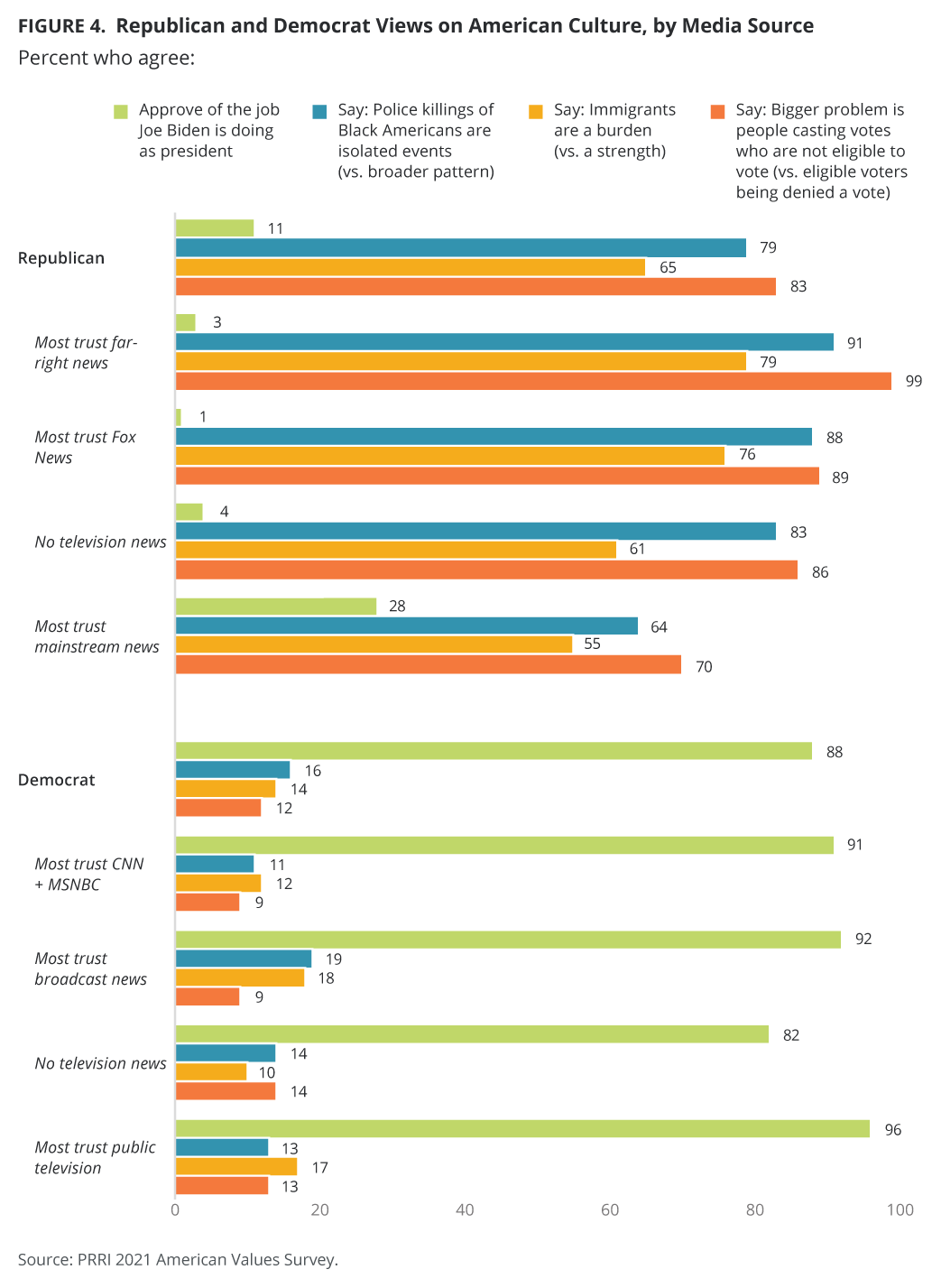 [1]Independents do not cluster sufficiently on any media sources to allow for reliable analysis of their views based on media trust.

[2]The sample size of MSNBC Democrats is too small to report alone, but their views are statistically indistinguishable from those of CNN Democrats on the questions reported. The groups are reported together for these reasons.

Related Research
Trumpism After Trump? How Fox News Structures Republican Attitudes
Competing Visions of America: An Evolving Identity or a Culture Under Attack? Findings from the 2021 American Values Survey
Religious Identities and the Race Against the Virus: (Wave 2: June 2021)
Thanks for signing up!
Tweet
Tweet
Tweet