As a whole, Americans today are more supportive than ever of LGBTQ rights. Yet, the latest national survey from PRRI shows clear partisan and religious divides on these issues. In September 2022, PRRI surveyed a random sample of 2,523 adults living across the United States. As in past surveys, white evangelical Protestants were the religious group whose members were least likely to support LGBTQ rights, and Republicans were less likely to express support than any other political group.

Across various issues — including employment nondiscrimination protections for LGBTQ people, the legality of same-sex marriage, parental discretion regarding gender-affirming healthcare for children, and allowing businesses to refuse service to gay or lesbian people — the majority of nearly every religious group other than white evangelicals, including religiously unaffiliated Americans, landed on the side of support for LGBTQ people. The same goes for political groups: the majority of both Democrats and independents expressed support for LGBTQ rights while the majority of Republicans did not.

Religious Americans who are not Christians (such as Jews, Muslims, Buddhists, and Hindus) are especially supportive of LGBTQ rights, as are Black Protestants, Hispanic and White Catholics, and white mainline Protestants. The vast majority of all of these groups favor laws that protect LGBTQ people against workplace discrimination. Seventy-five percent of Hispanic Catholics oppose laws that would allow business owners to refuse service to gay or lesbian people, as do 68% of Black Protestants and 66% of non-Christian religious Americans. While respondents were more divided when it came to laws that would restrict parents from allowing their children to receive gender-affirming healthcare, clear majorities of Hispanic and White Catholics and non-Christian religious respondents oppose such laws. 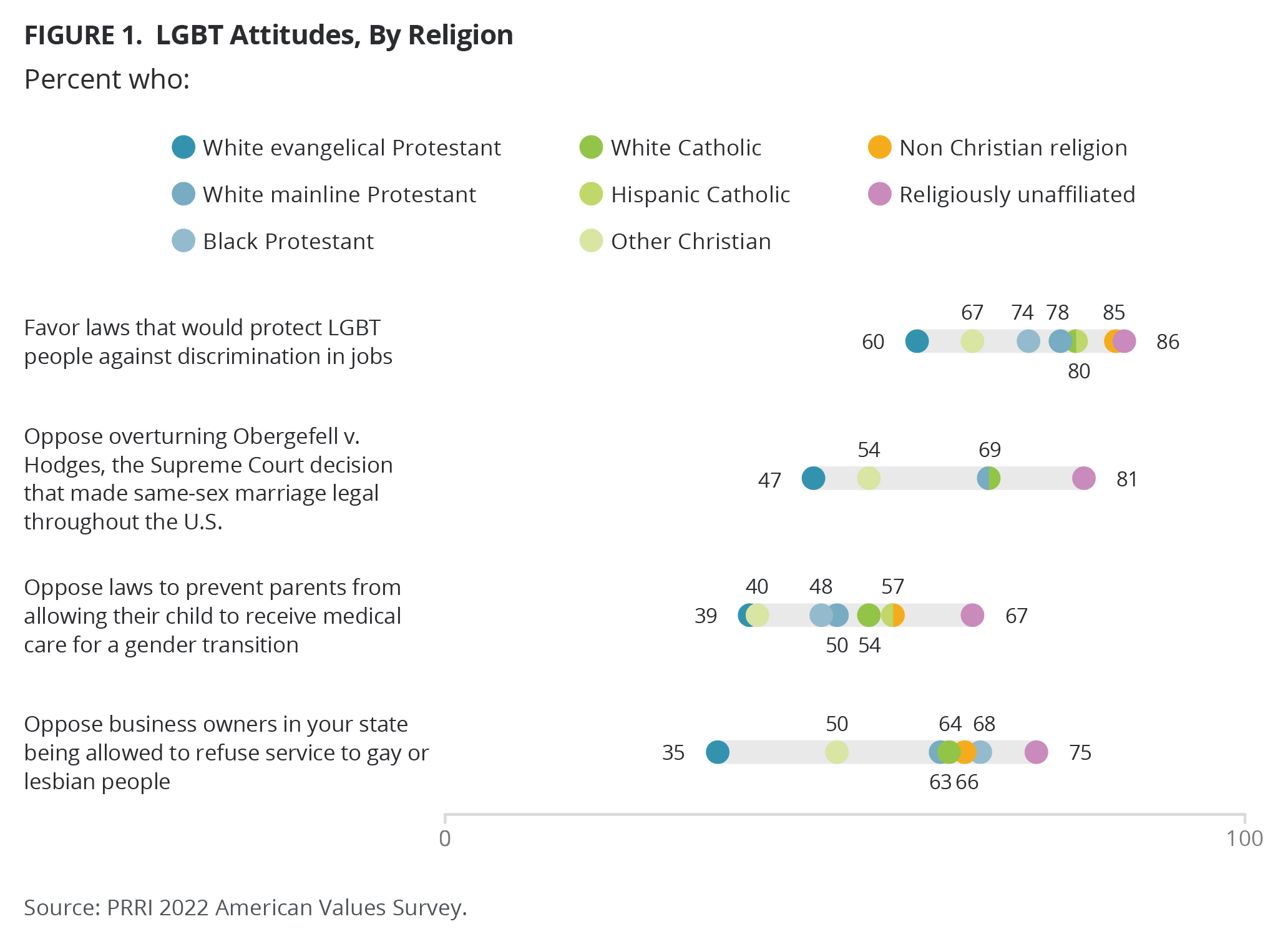 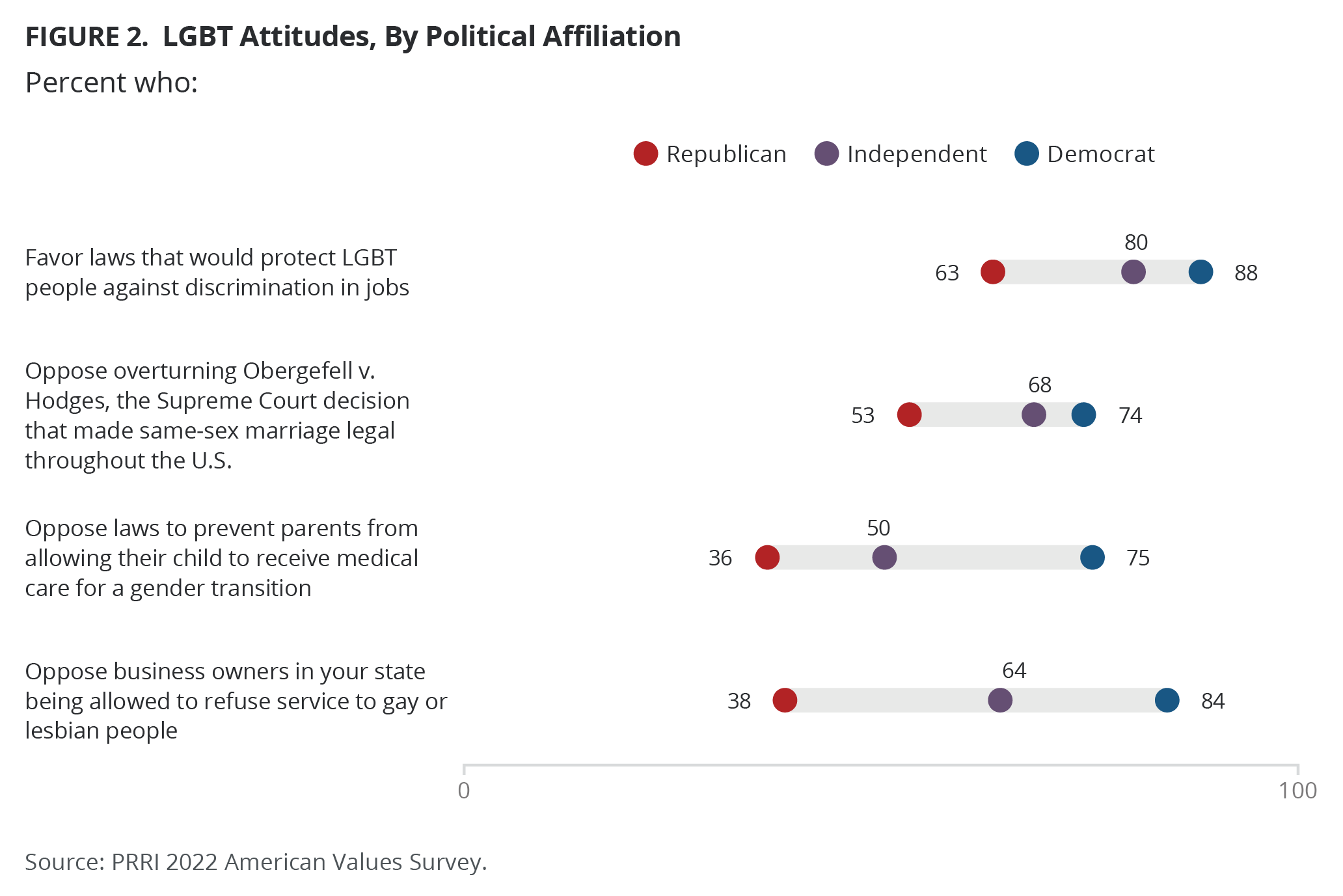 Why have these attitudes changed, particularly among white evangelicals and Republicans? New legislative proposals and accompanying news coverage are likely culprits. In 2022, a record number of anti-trans laws were proposed by Republican politicians in states across the country. These efforts, and the beliefs motivating them, were applauded by conservative news outlets and the issue received extensive coverage. In contrast, according to a report published by Media Matters for America, in 2021 there were only 19 television news segments that reported on anti-transgender violence (which was at an all-time high), and much of that coverage came from left-leaning MSNBC. 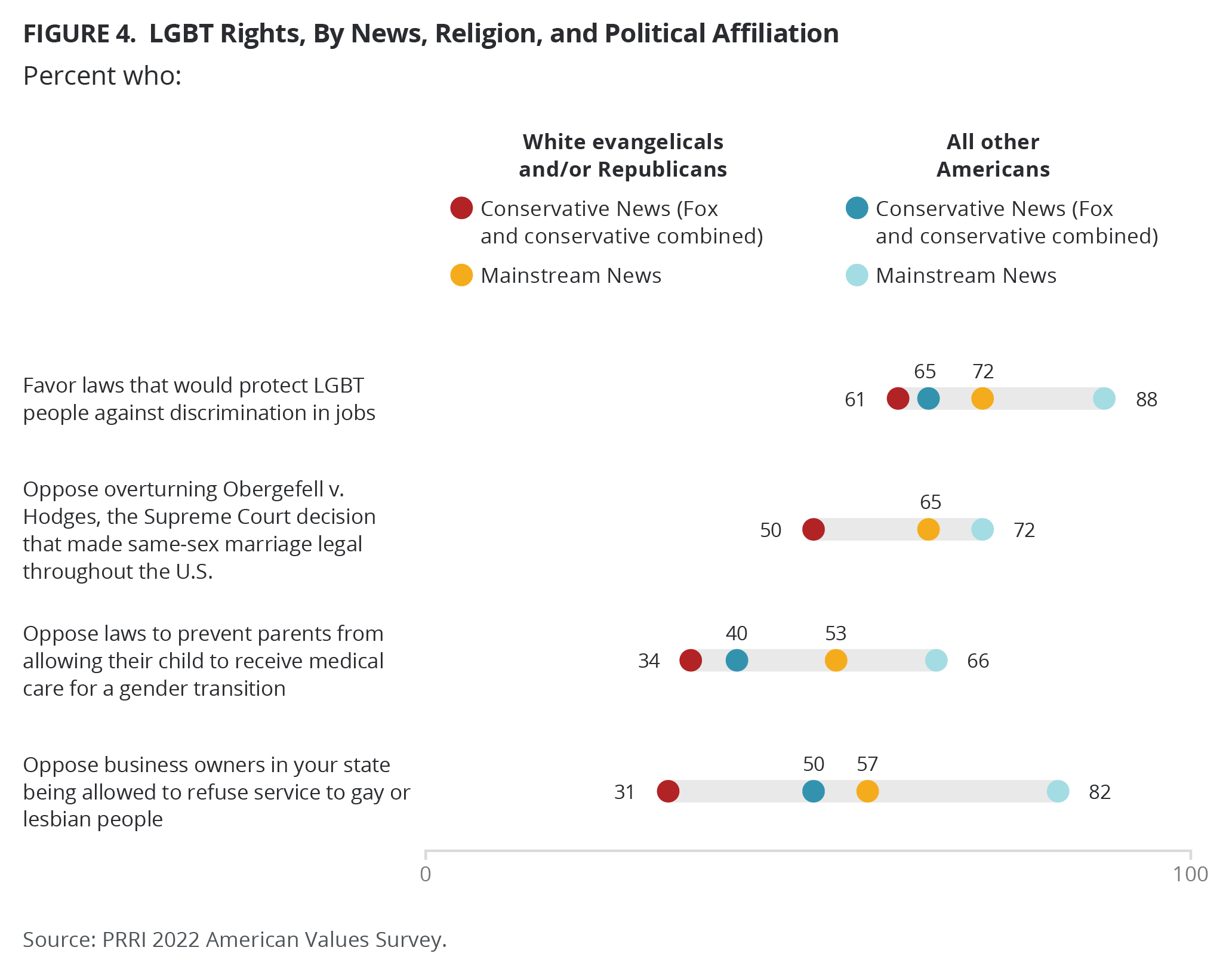 White evangelicalism, Republican affiliation, and trust of conservative news outlets intersect to create particularly hostile attitudes toward LGBTQ Americans. And, as PRRI has found, consumption of far-right TV news outlets appears to be on the rise. The result is the persistence of a polarized landscape when it comes to LGBTQ rights.