Listening to conservative religious commentators or even popular LGBTQ media outlets, you might be hard-pressed to find references to religious LGBTQ people. Most of the time, media, religious, and even scientific discourse relies on what I refer to as the Will & Grace paradigm to both depict and evaluate LGBTQ culture. In short, this means popular portrayals and social scientific theories about LGBTQ behavior rest on the assumption that white, wealthy, urbanite, non-religious gay cisgender men are the paradigm of the social category we call LGBTQ. This cannot be further from the truth. 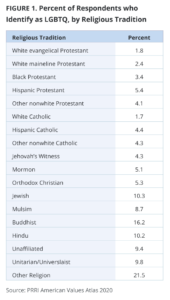 Since the 1960s, LGBTQ people and their allies have democratized existing religious spaces and even created their own when necessary. Some early organizations like the Council on Religion and the Homosexual sought to educate clergy about the LGBT community. Others, like the Metropolitan Community Church and Unity Fellowship Movement, sought to uplift LGBTQ people who were rejected by their religious communities. Since the 1970s, numerous local congregations and whole denominations have undertaken efforts to become more open and/or affirming with regard to the full participation of LGBTQ members and leaders. In short, the opportunities for LGBTQ people to express their faith and participate within faith communities in the United States have multiplied.

These are not just social or spiritual opportunities, however. Remember, religious participation can facilitate political participation. Why? One theory holds that religiously active people gain specific skills and knowledge that can help them translate their volunteerism into political activism. Another theory holds that religious organizations recruit political participants like they do any other interest group. Still another theory holds that for marginalized people, organizations that offer community connectedness (think religious communities formed by immigrant communities, predominantly African American churches and, yes, LGBTQ community organizations) also foster political activism as members learn about their marginalization, the power of collective action, and the source of their marginalization.

I tested this theory using data from a representative sample of LGBTQ people in the United States. The sample was recruited from Qualtrics, Inc., between November 4 and 14, 2016; while it was not a random sample, I established demographic quotas based on two probability samples of LGBTQ Americans in order to make the sample as representative as possible.

As Figure 2 shows, after controlling for other potential influences, including religious tradition, age, education, income, urban residency, ethnicity, gender, and measures of LGBTQ identity, religiously active LGBTQ people in affirming congregations are more likely to participate in a variety of political activities. Although only shown in the aggregate here, the association holds for voting in primary elections, donating money, volunteering for campaigns, and attending political rallies. 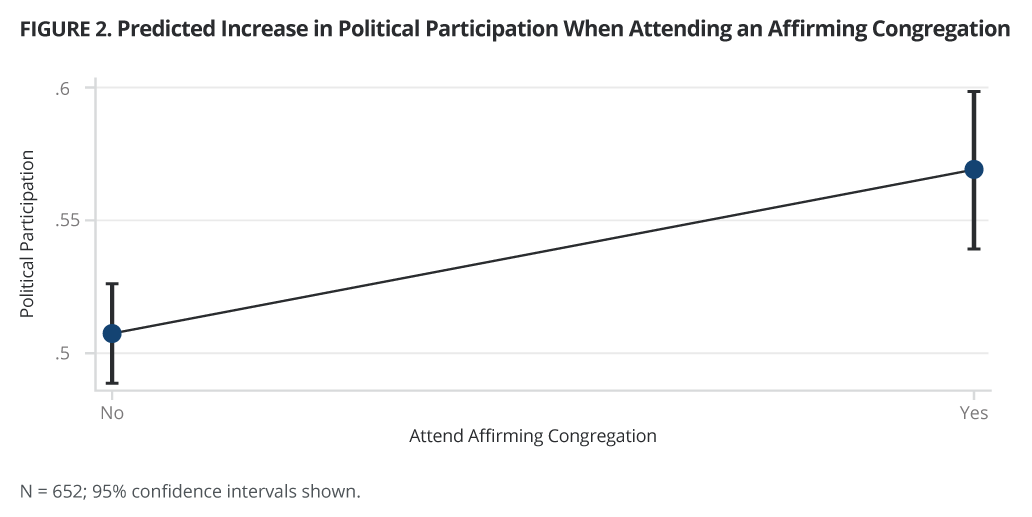 These results are from an exploratory analysis, and there is still a lot we do not know. For example, are religiously active LGBTQ people attending affirming congregations because they are more politically active? I cannot answer that question with these data. But this leads to another important point about how social science is failing religious LGBTQ populations. Because many researchers have been trained under them Will & Grace paradigm, they often do not think to ask LGBTQ people about their religious experiences when designing surveys. So we are often left with an incomplete picture of the lives and experiences of LGBTQ people.