This week, Donald Trump visited the important battleground state of Arizona, first stopping to visit a section of a newly constructed border wall with the Mexican border and then meeting with nearly 3,000 young people affiliated with Students for Trump in a Phoenix church.  Said one of the group’s student organizers to a local news station, Austin Smith, “A lot of people think that the left has a monopoly on the youth vote and that’s just not true.”  Our research, however, suggests that Trump is in serious trouble with younger voters, and immigration policy—including the contested border wall—is one area that harms his changes with Gen Z voters in the fall.

Generation Z is the cohort born after 1996 and are comprised of the most racial and ethnic minorities (48%) than any other generation in the U.S. Their diversity provides a baseline for understanding how this generation differs from others in their attitudes about immigration. In late May 2020, we conducted an online, national survey through Qualtrics Panels of 1,049 Generation Z respondents, ages 18-24, on a number of issues that included their attitudes about immigration and their voting intentions this fall.  While participants were volunteers (i.e. not a random sample), we constructed the sample to be representative of Gen Z on a variety of metrics (gender, race, socioeconomic status) and weighted the data accordingly.  We also rely on a similar survey of all Americans (1, 251 respondents) conducted by one of the authors in November 2015 through Qualtrics Survey as a point of comparison, which is also weighted to reflect the general population distribution of age groups.

First, we find that a plurality, 43%, of Gen Z respondents, believe that immigration is a critical issue to them personally, compared with 41% who said immigration was one among many important issues; just 16% of Gen Zers described immigration as not that important.  We also asked respondents whether they supported allowing undocumented children to receive permanent legal status, known as the Deferred Action for Childhood Arrivals (DACA) program, which garnered headlines last week when the Supreme Court unexpectedly blocked the Trump administration’s efforts to end it, at least temporarily. We find that Zoomers are particularly supportive of the DACA policy, with 56% saying that they support this policy a lot or some. In a study by one of the authors that asked Millennials (those born between 1981 and 1996) and older adults the same question, just 53% of Millennials and 42% of older generations said the same.

It would not be unexpected if the economic fallout of the COVID-19 pandemic, which has disproportionately impacted young people, led to a dampening of attitudes about immigration among Zoomers—since immigrants are often perceived as taking jobs from Americans, especially in a tight economic market. However, we find a consistent pattern of tolerance and support among Gen Z on immigration-related issues, even beyond just DACA, which PRRI finds is generally one of the most broadly supported immigration policies.

The figure below, compiled from our recent survey on Generation Z and compared to a previous similar survey on Millennials and older generations, reveals that, across-the-board Gen Zers are more supportive of pro-immigration positions than Millennials and older adults. On all four issues a large plurality and a near majority of Gen Z respondents believe immigrants are a positive force in American society. These attitudes are represented in their views related to the role of immigrants in strengthening the diversity of the U.S., in their contribution to the economy, and in their lack of being a threat to national security. Furthermore, a majority of Gen Zers surveyed are opposed to the building of a wall at the southern U.S. border. These are all attitudes that are in stark contrast to those that inform the policy positions of the Trump administration and will likely be a major campaign theme come November. 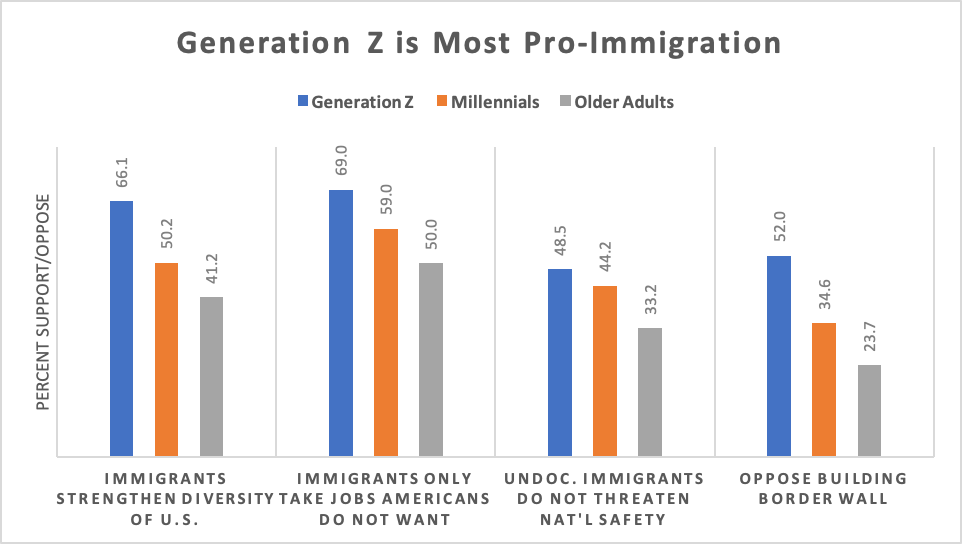 Note: The wording for the question on building a border wall asked respondents to select whether they supported the building of a wall “a lot”, “some”, “a little”, or “none”. We combined the responses of “a little” and “none” to construct the percent of respondents who are opposed to this position in order to keep pro-immigration positions consistent across questions.

Our survey of Gen Z Americans finds that a solid majority of Gen Z likely voters plan to vote for Joe Biden this fall, 54%, compared with just 28% of who plan to back Donald Trump, which is comparable to data collected by the PEW Research Center Data in January of this year, which found that 58% of Gen Z voters intended to vote for the Democratic nominee.  Moreover, our May survey finds that 62% of Zoomers who support DACA intend to vote for Biden, but that Trump’s opposition to DACA may not result in the dividends he expects among the minority of Gen Z voters who do not support the policy; 42% of those voters plan to vote for Biden.

Of course, immigration reform is not the sole political concern of Generation Z, as both the recent protests and marches in the streets for racial equality demonstrate, as does their prior activism involving climate change, women’s and LGBT rights, and gun violence.  However, their views on immigration likely speak to the broader push by Gen Z to promote and take care of marginalized communities.  Donald Trump’s attempts to tout tough immigration policies, such as his beloved border wall in states such as Arizona, or other cultural wedge issues this fall, will likely fall flat among this nascent cohort of young voters.

Stella M. Rouse is an associate professor and director of the Center for Democracy and Civic Engagement at the University of Maryland. Her book, “The Politics of Millennials: Political Beliefs and Policy Preferences of America’s Most Diverse Generation” (co-authored with Ashley Ross) is available from the University of Michigan Press.  She is also a PRRI Public Fellow.

Melissa Deckman is the Louis L. Goldstein Professor of Public Affairs at Washington College and the author of Tea Party Women: Mama Grizzlies, Grassroots Activists and the Changing Face of the American Right” (New York University Press).  She chairs the board of PRRI.