The QAnon conspiracy movement emerged out of the internet in late 2017, a little under a year into former President Trump’s term in office. Initially, much of the movement was contained to cryptic messages posted on online message boards, but it has expanded to encompass wide swaths of American beliefs.

Across 2021, PRRI tracked agreement with three statements that form the pillars of QAnon beliefs: (1) The government, media, and financial sector are controlled by a group of Satan-worshipping pedophiles who run a global child sex-trafficking operation; (2) There is a storm coming soon that will sweep away the elites in power and restore the rightful leaders; and (3) Because things have gotten so far off track, true American patriots may have to resort to violence in order to save our country. Those who generally agree with these statements are labeled QAnon believers, those who completely disagree with all three are QAnon rejecters, and those who are in between but mostly disagree are QAnon doubters.

Myth: QAnon is just a fringe belief on the internet

Data from PRRI throughout 2021 shows that 16% of Americans, or around 41 million people, are QAnon believers. These views are not just confined to shadier corners of the internet. Many of the people arrested for their alleged roles in storming the Capitol on January 6, 2021, had proclaimed ties to QAnon, and many of the so-called trucker convoy protests in February and March 2022 included QAnon elements. Additionally, 56 current or former candidates running for Congress in 2022 have supported the QAnon movement or appealed to its followers.

Myth: QAnon is only made up of a few ultra-conservative Republicans

Myth: QAnon was originally based around Donald Trump and will probably collapse now that he’s out of office 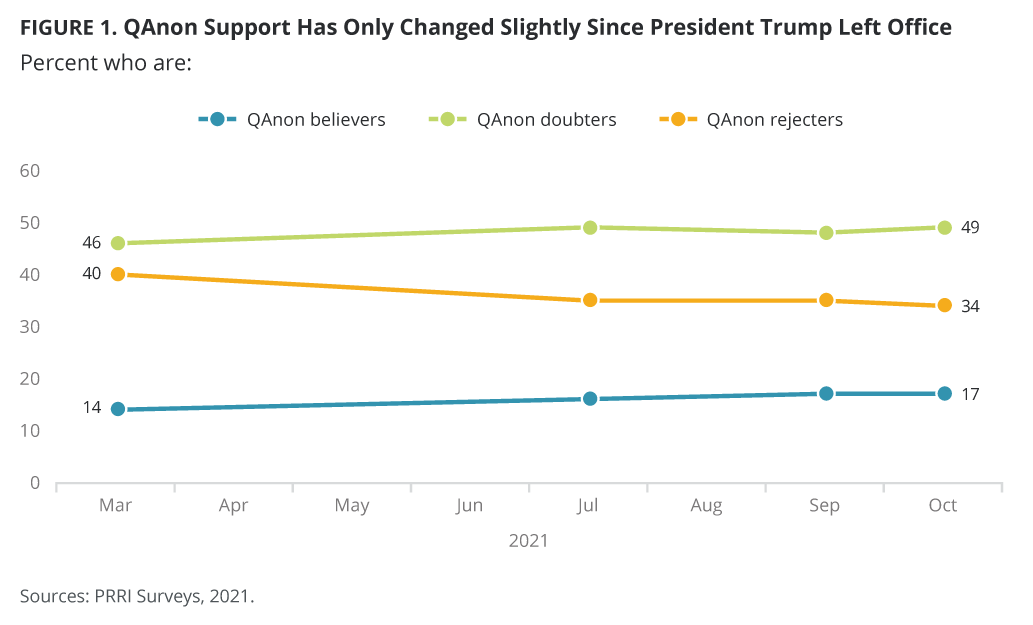 Additionally, Trump continues to hold sway even after his electoral defeat and President Joe Biden’s inauguration. Seven in ten QAnon believers (69%) agree that the 2020 election was stolen from Trump, compared to about half as many QAnon doubters (36%) and only six percent of QAnon rejecters.

Myth: No one could seriously believe that the government is run by pedophiles

Nearly one in five Americans (16%) agree with the statement that “The government, media, and financial sector are controlled by a group of Satan-worshipping pedophiles who run a global child sex-trafficking operation.” Agreement with this statement is even higher among Republicans (23%), Americans who most trust Fox News (23%), and Americans who most trust far-right news outlets like One America News Network (OANN) or Newsmax (42%).

Several prominent Republicans have recently made comments that imply their opponents either are pedophiles or are supportive of pedophiles. In March 2022, a spokesperson for Florida Gov. Ron DeSantis (R) said that someone who opposes the controversial “Don’t Say Gay” bill is “probably a groomer,” implying that opponents were pedophiles. At the Conservative Political Action Conference (CPAC) in February 2022, conservative media personality Candace Owens accused political opponents of having pedophilic tendencies and of “sexualizing” children by speaking about gender identity.