The right-wing QAnon conspiracy movement emerged on the internet in late 2017. While followers of the QAnon movement claim a variety of different beliefs, the main threads of QAnon’s core theory are that a network of Satan-worshipping pedophiles control the government and media, and that a coming “storm” will sweep them out of power.[1] The QAnon movement centered former President Donald Trump as its key leader, and said he was secretly fighting to unmask the evildoers who controlled the political and economic systems of power.

Perhaps the most visible role QAnon has played was in the January 6, 2021, insurrection at the Capitol, from which the “QAnon shaman” became an iconic image. Fortunately, the goal of keeping Trump as president despite his electoral defeat was not achieved. Even through Trump leaving office, major social media platforms banning QAnon activity, and the leader of the movement, called “Q,” disappearing from the internet, QAnon has continued to thrive on alternative platforms with a handful of influencers leading the group.[2] PRRI data also shows that the proportion of Americans who believe, or are at least open to believing, QAnon conspiracies held mostly steady throughout 2021.

To attempt to understand both the scope and the makeup of the QAnon movement, PRRI fielded a set of three questions in four different surveys over the course of 2021, measuring agreement or disagreement (completely agree, mostly agree, mostly disagree, or completely disagree) with foundational QAnon beliefs:[3]

Combining data from these four surveys offers a comprehensive look at QAnon beliefs. Across the four surveys, around one in five Americans mostly or completely agree that there is a storm coming (22%), that violence might be necessary to save our country (18%), and that the government, media, and financial worlds are controlled by Satan-worshipping pedophiles (16%). 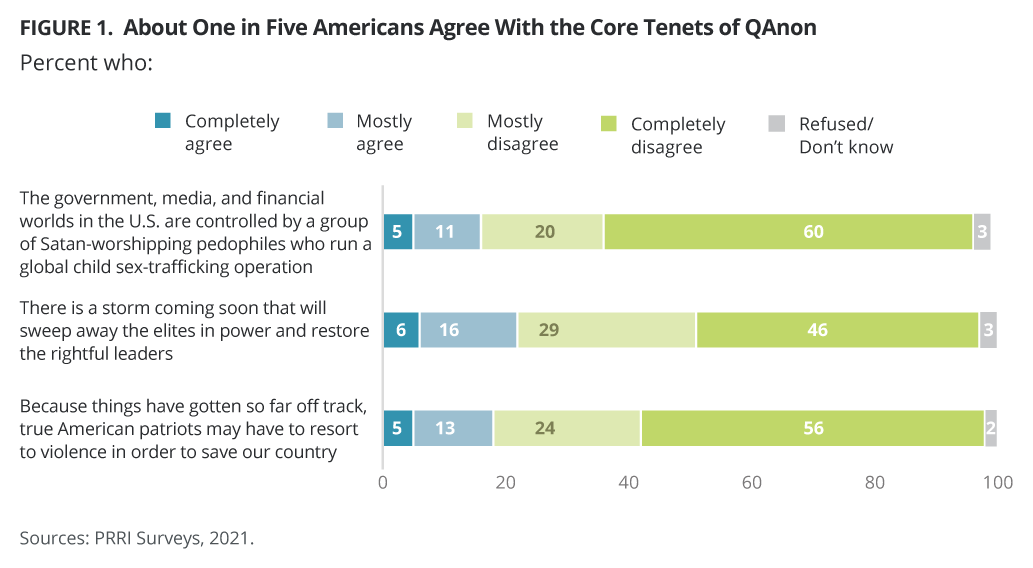 To assess overall belief in QAnon, PRRI created a composite measure from these three questions and identified the following three groups: 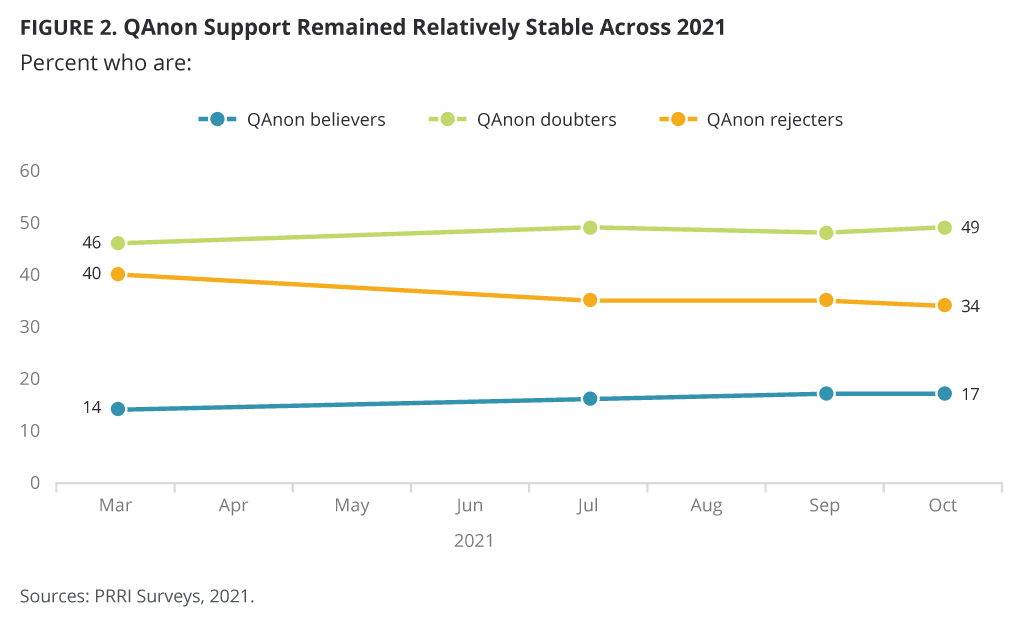 Looking only at the 16% who are QAnon believers, 43% are Republicans and 27% are independents.[4] Smaller shares are Democrats and other political party affiliations (19% and 12%, respectively). 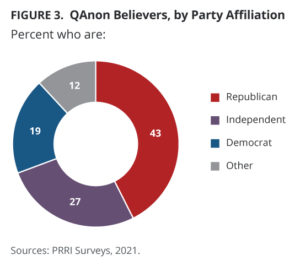 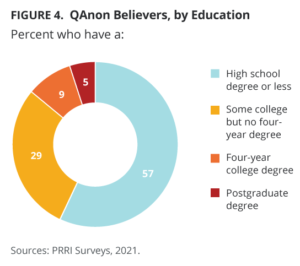 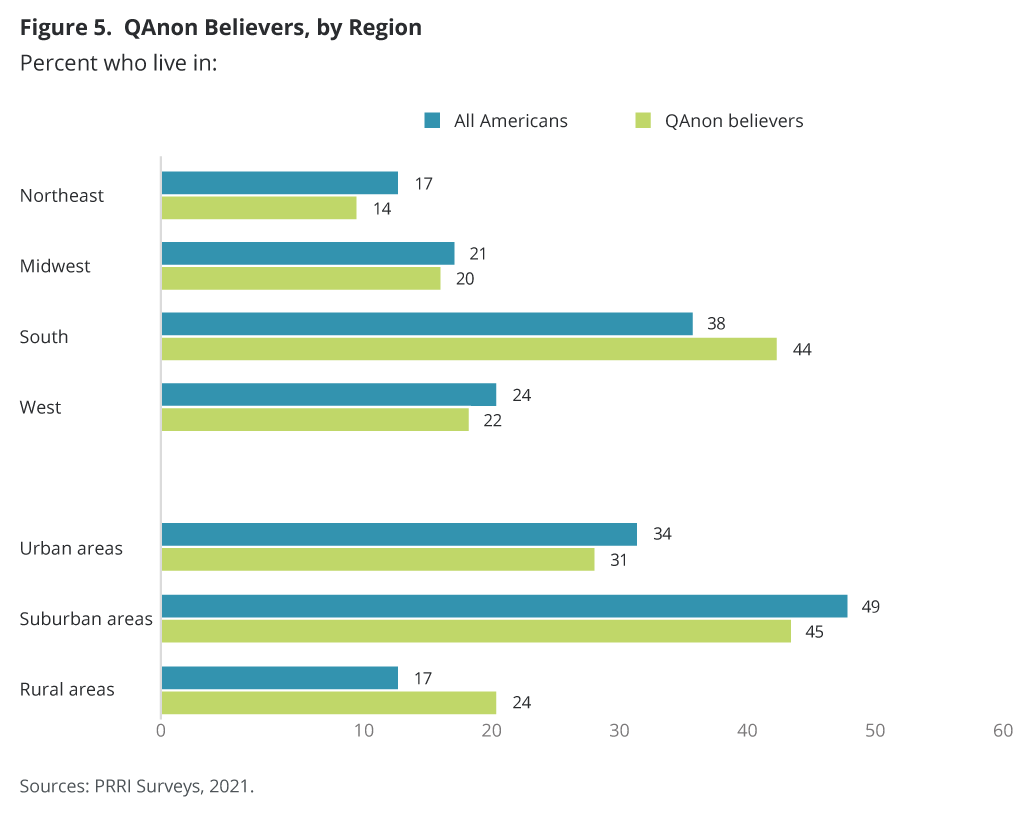 PRRI constructed a logistical regression model to explain which characteristics are associated with QAnon beliefs. In the table below, the dependent variable is the QAnon believer category from the QAnon scale. The independent variables are grouped into four categories: political orientation, media consumption, religious affiliation, and socioeconomic and demographic traits. Table 1 shows all statistically significant results where the magnitude of the odds ratios is greater than 1.5. 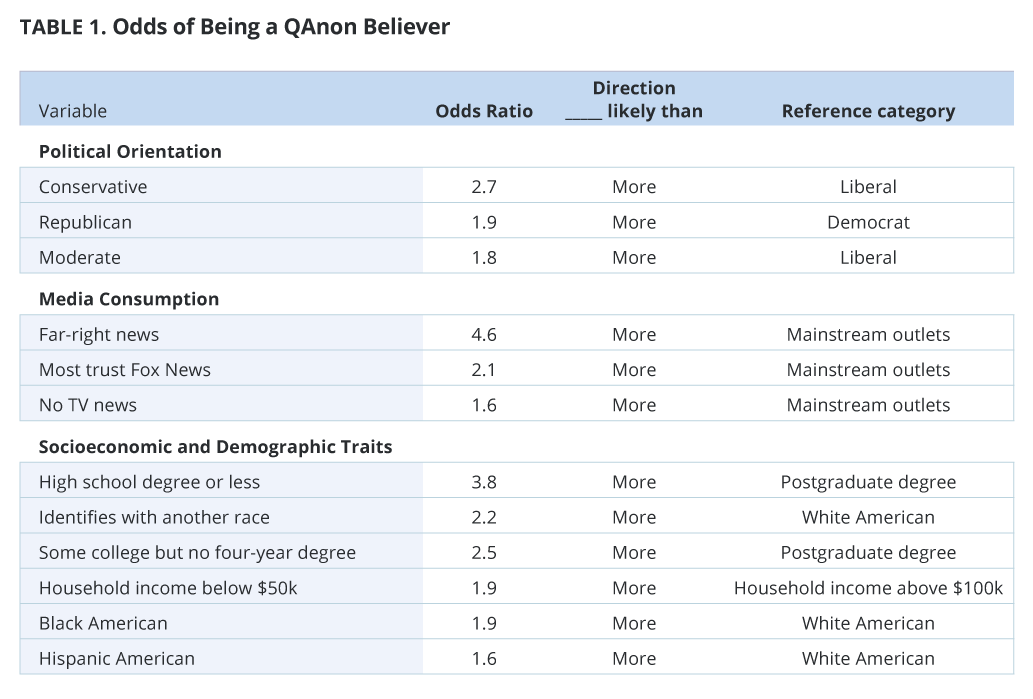 The race effects in the model are somewhat perplexing at first glance, but ultimately make sense. The regression model shows independent effects after accounting for all other variables, which means that after accounting for Republicans, conservatives, and far-right news followers—groups that are predominantly white—the independent effects of race indicate that Black and Hispanic Americans are more likely to be QAnon believers than white Americans are.

What QAnon Believers Think About Politics

Views of the Parties and Politicians

QAnon believers have overwhelmingly negative views of President Joe Biden. About one in four QAnon believers have a favorable view of Biden (26%), while 69% have unfavorable views of him, including a 57% majority who have very unfavorable views of him. Just 30% strongly or somewhat approve of the job he is doing as president, while 70% disapprove, including a majority (57%) who strongly disapprove. QAnon believers are even more negative in their approval of Biden’s job performance on issues, with around seven in ten or more who disapprove of the job Biden is doing handling immigration (75%), the economy (74%), or the COVID-19 pandemic (69%). 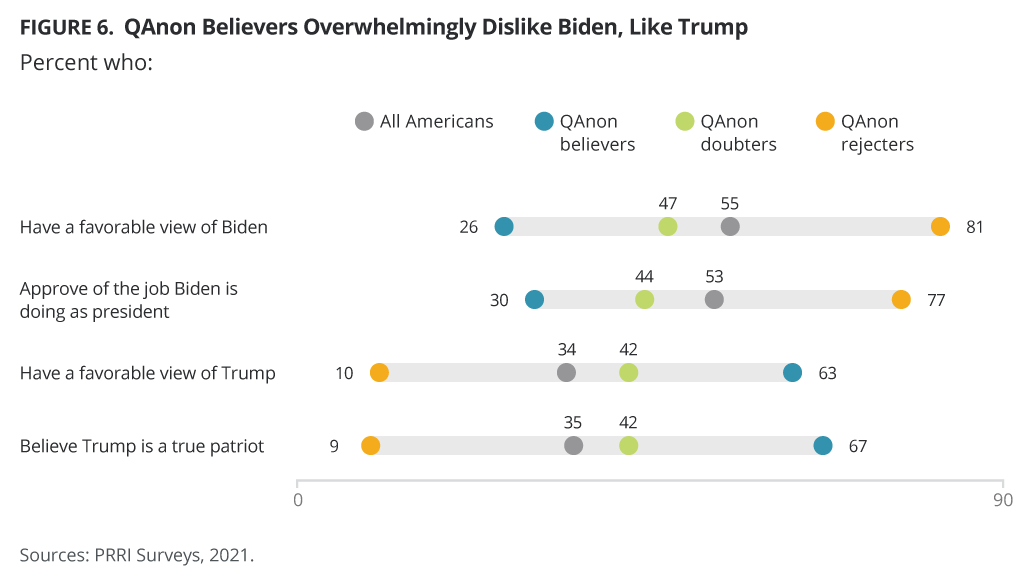 QAnon believers are much more favorable toward Donald Trump, with 63% who have a favorable opinion of Trump and 31% who have an unfavorable view of him. Around four in ten QAnon doubters have favorable views of Trump (42%), compared to just one in ten QAnon rejecters (10%). Furthermore, two-thirds of QAnon believers (67%) believe that Trump is a true patriot, compared to around four in ten doubters (42%) and around one in ten rejecters (9%).

Belief That the 2020 Election Was Stolen

Responsibility for the Insurrection on January 6, 2021

Americans say white supremacist groups (59%), former President Donald Trump (56%), and conservative media platforms that spread conspiracy theories and misinformation (55%) shoulder a lot of responsibility for the violent actions of the rioters who took over the U.S. Capitol on January 6.

QAnon believers are notably less likely than QAnon doubters and QAnon rejecters to put a lot of the blame for the Capitol riot on all these groups. QAnon believers are about half as likely as QAnon rejecters to blame white supremacist groups (36% vs. 78%), conservative media platforms that spread conspiracy theories and misinformation (36% vs. 78%), and Donald Trump (30% vs. 83%). About half of QAnon doubters blame white supremacist groups (54%), conservative media platforms (46%), or Trump (48%).

Despite the lack of any credible evidence that substantial numbers of liberal or left-wing groups participated in the insurrection, 38% of Americans put a lot of blame on these groups. Not surprisingly, this is the only group on which the majority of QAnon believers (59%) place a lot of blame for the Capitol riot, compared to 20% of QAnon rejecters and 44% of QAnon doubters. 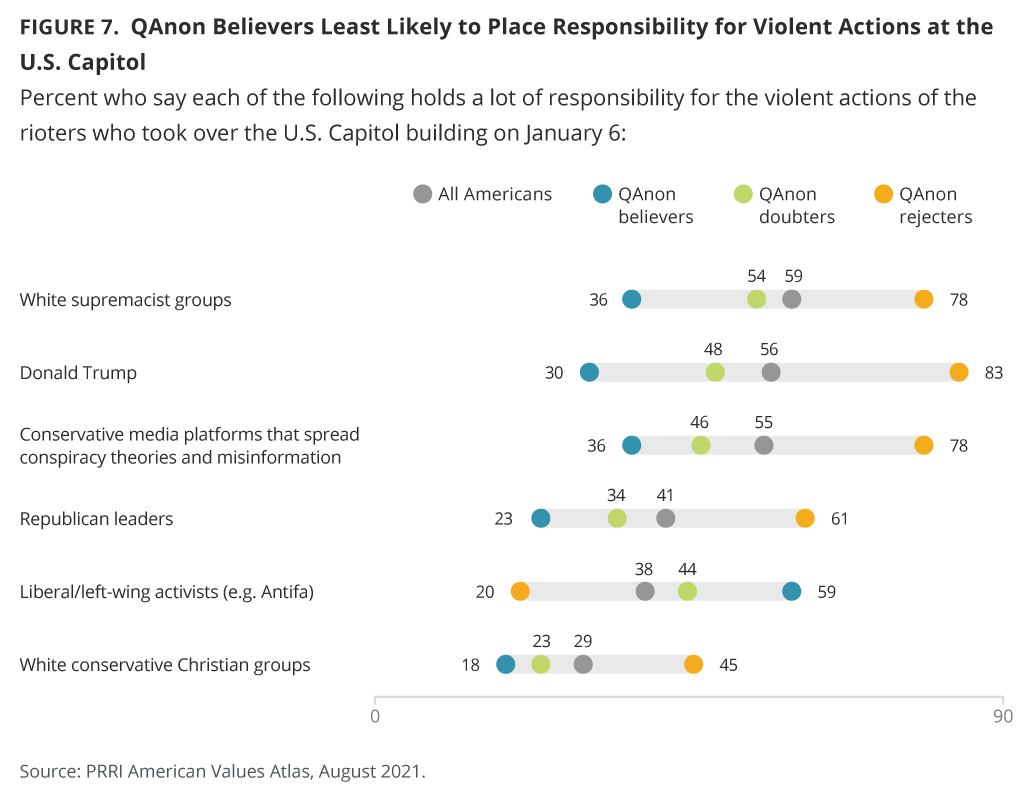 Around eight in ten QAnon believers (81%) agree with the statement that America is in danger of losing its culture and identity, compared to significantly smaller shares of QAnon doubters (61%) and rejecters (27%). Additionally, more than seven in ten QAnon believers say that the values of Islam are at odds with American values and way of life (72%), or that the American way of life needs to be protected from foreign influence (73%). QAnon rejecters (30% and 33%, respectively) and doubters (58% and 63%, respectively) are much less likely to agree.

QAnon believers (32%) are about twice as likely as QAnon doubters (17%) and about five times as likely as rejecters (6%) to agree with the statement that “the idea of America where most people are not white bothers me.” 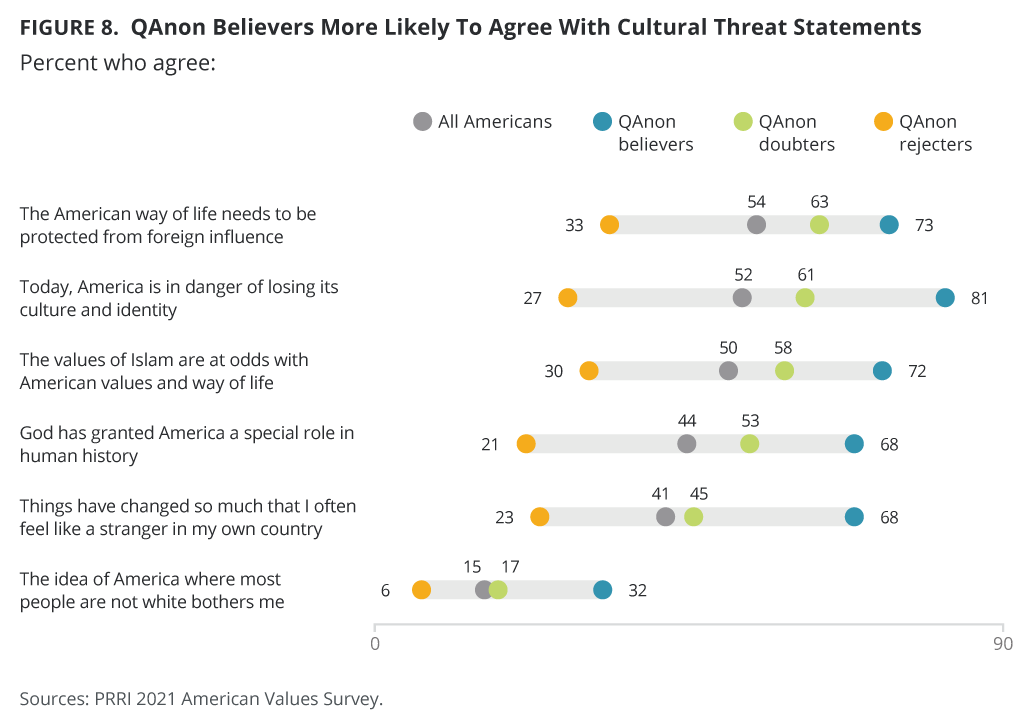 A smaller but significant percentage of QAnon believers say Western European heritage is important to being truly American (30%) and are substantially more likely than QAnon rejecters (7%), all Americans (17%), and QAnon doubters (20%) to think this way.

The full dataset used for analysis consists of 19,399 respondents from four surveys designed and conducted by PRRI throughout 2021. All surveys are among random samples of adults (ages 18 and over) living in all 50 states in the United States and who are part of Ipsos’s KnowledgePanel. Some surveys include small additional opt-in samples to increase the sample sizes in smaller states. All surveys’ full samples are weighted to be representative of the U.S. population. The margin of error for the full dataset is +/- 0.9 percentage points, including the design effect of 1.6. There are 2,776 QAnon believers in the dataset. Analysis of this subgroup has a margin of error of +/-2.4 percentage points, including the design effect.

Survey methodologies for the four individual surveys used in this report can be found in the full survey releases here: 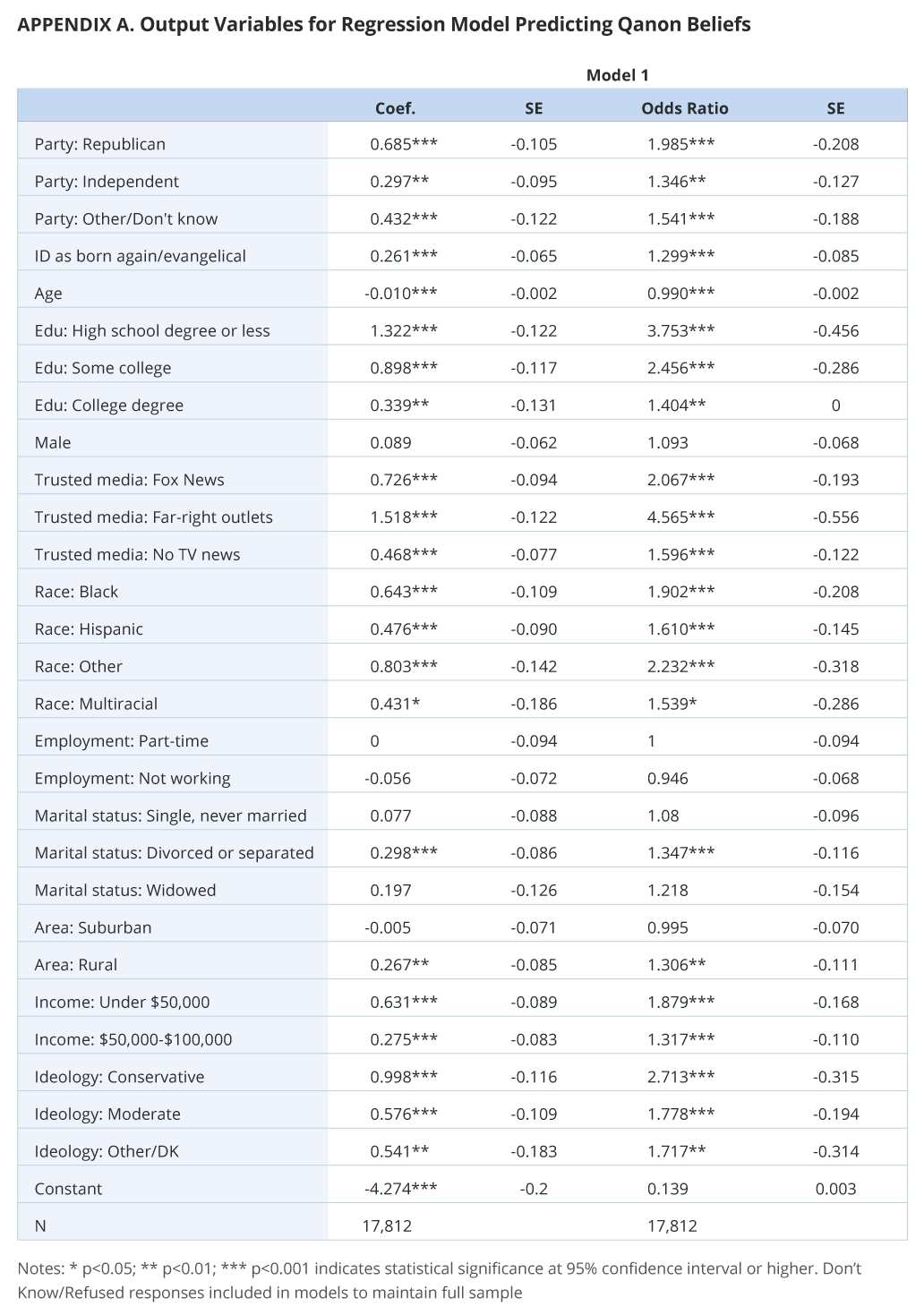 [3]Agree-disagree questions can sometimes have “acquiescence” bias, owing to people’s tendency to be agreeable in surveys. However, these specific questions are likely more robust due to their extreme content and are generally consistent with other estimates of believing in these conspiracy theories.

Russia’s objective in the U.S. has already largely been achieved

Belief in QAnon has strengthened in US since Trump was voted out, study finds
Related Research
Understanding QAnon’s Connection to American Politics, Religion, and Media Consumption
Ahead of Anniversary of 1/6 Insurrection, Republicans Remain Entangled in the Big Lie, QAnon, and Temptations toward Political Violence
Thanks for signing up!