This month marks the 15th anniversary of the September 11 terrorist attacks. The attacks—the deadliest on U.S. soil since Pearl Harbor—lead to increasing concerns about the issue of terrorism in the United States. However, until recently, most Americans did not believe they or their family were at risk of being victims of terrorism. According to a recent PRRI survey, that is no longer the case.

To understand the public’s stance on terrorism today, we took a look at findings from the recent PRRI/Brookings survey report. While concerns about terrorism have risen and most Americans hold reservations about Islam’s compatibility with U.S. values, majorities reject bans on Muslims and Syrian refugees.

Concerns About Terrorism Are Up 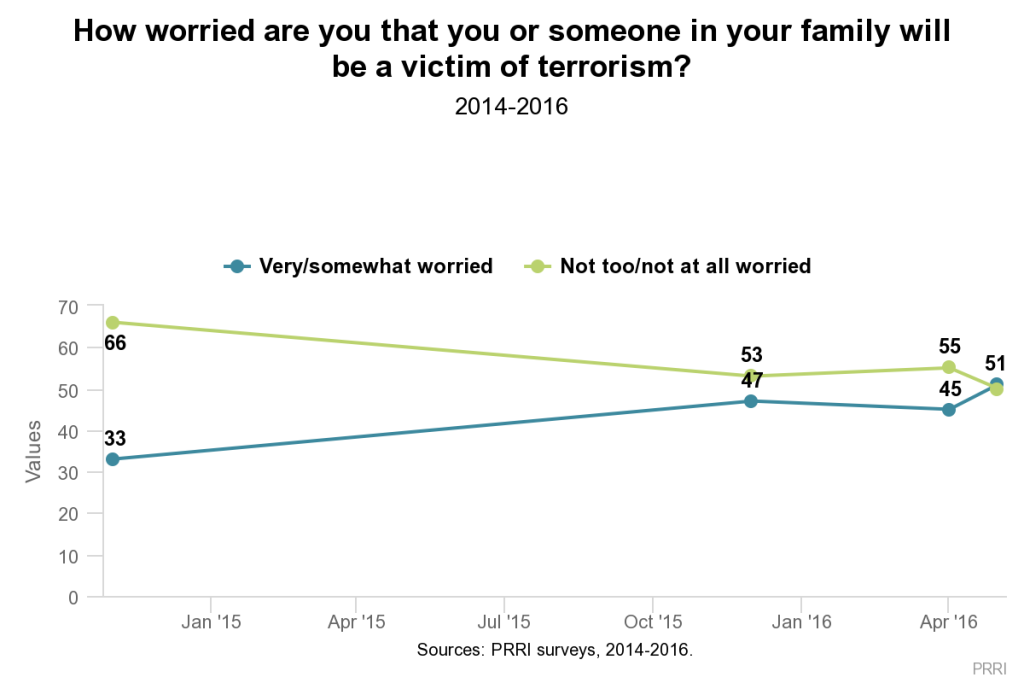 Concerns about terrorism have increased significantly in just the last couple years. A slim majority (51 percent) of Americans report feeling at least somewhat worried that they or a member of their family will become a victim of terrorism. That’s up from 33 percent in late 2014.

Republicans (62 percent) and Trump primary supporters (65 percent) are more likely to express concern about terrorism, while only 44 percent of Democrats are at least somewhat worried they or someone in their family will be a terrorism victim. 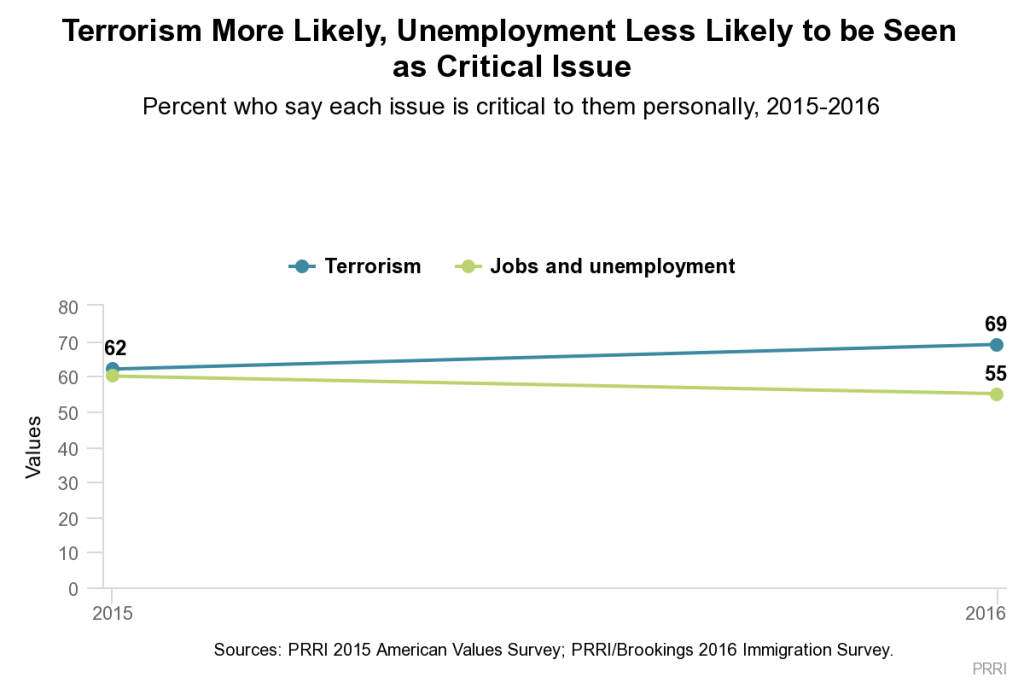 Most See Islam “At Odds” with American Culture 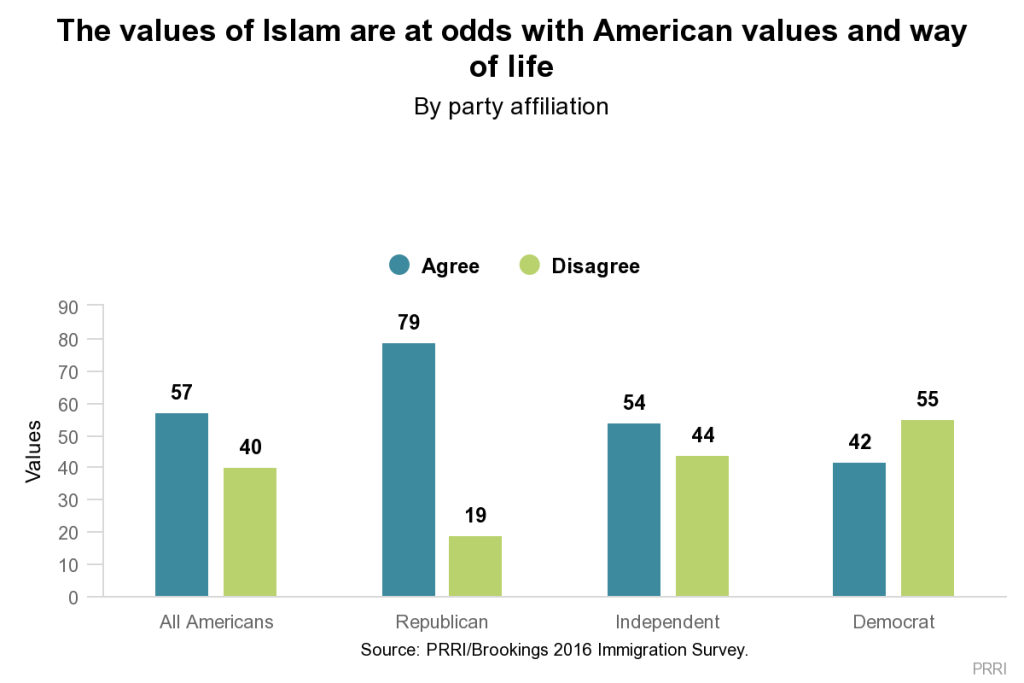 Al-Qaeda and ISIS’ claim to be Islamic has, in part, led to increased concern over Muslim people in the country, and Americans are more likely than not to say American and Islam’s values do not align. Most (57 percent) Americans agree that the values of Islam are at odds with those of the U.S., while 40 percent disagree. 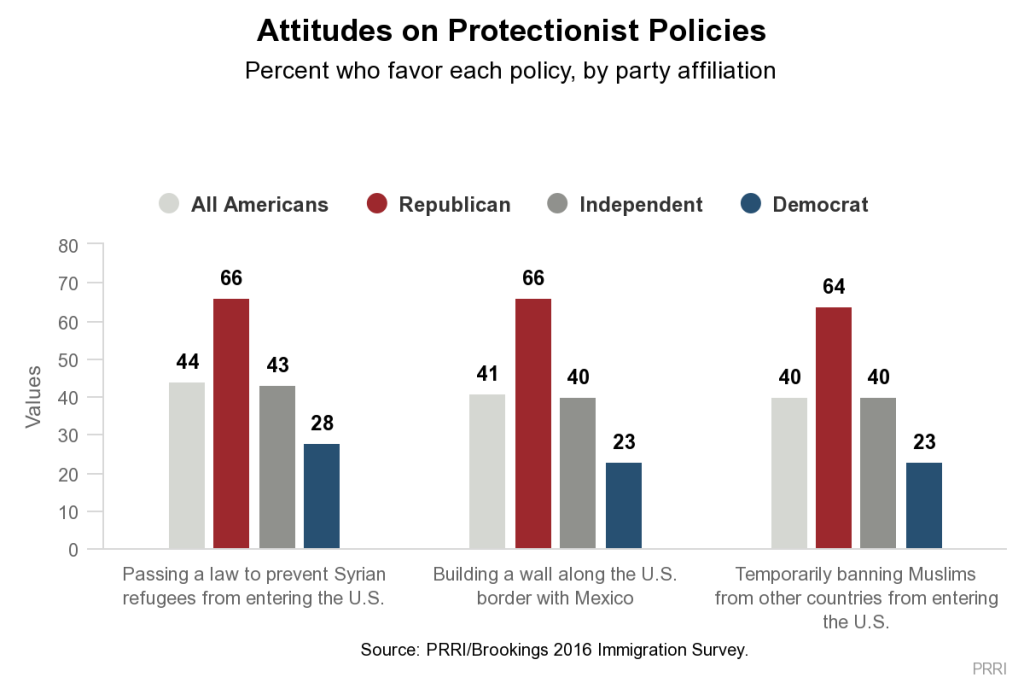 Concerns about the compatibility of Islam and American values do not translate into support for exclusionary and discriminatory policies, as the public largely opposes policies that single out Muslims and Syrian refugees. A majority (58 percent) of Americans—including 74 percent Democrats, and 59 percent of independents—oppose temporarily banning Muslims from other countries from coming to the U.S., while roughly two-thirds (64 percent) of Republicans favor this proposal. A similar number of Americans (55 percent) also oppose laws that would prevent Syrian refugees from entering the country.

Related Research
How Immigration and Concerns about Cultural Change are Shaping the 2016 Election | PRRI/Brookings Survey
Two-thirds of Republicans Say American Culture Has Worsened Since 1950s
Two-Thirds of Trump Supporters Say Nation Needs a Leader Willing to Break the Rules | PRRI/The Atlantic Survey
Thanks for signing up!
Tweet
Tweet
Tweet