Note: Some respondents included obscene language in their responses. These obscene responses are included for data purposes only.

In September 2019, PRRI asked almost 900 people to respond with the single word that they think best describes President Donald Trump. More than six in ten (62%) responded with a negative term, while one in four (26%) provided a positive word and 12% were neutral. Looking among Americans who are negative to Trump, they can be categorized into four separate groups. One-third (33%) criticized Trump’s intellect, maturity, and preparedness for the office of the presidency (“Negative Intellect”).[1] A similar amount (28%) were especially harsh toward Trump by describing him as bigoted, corrupt, criminal, and dictatorial (“Extremely Negative”).[2]Nearly one in four (23%) spoke negatively about Trump’s personality and conduct with others (“Negative Personality”), while less than one in five (15%) critiqued his ego (“Negative Ego”).[3] 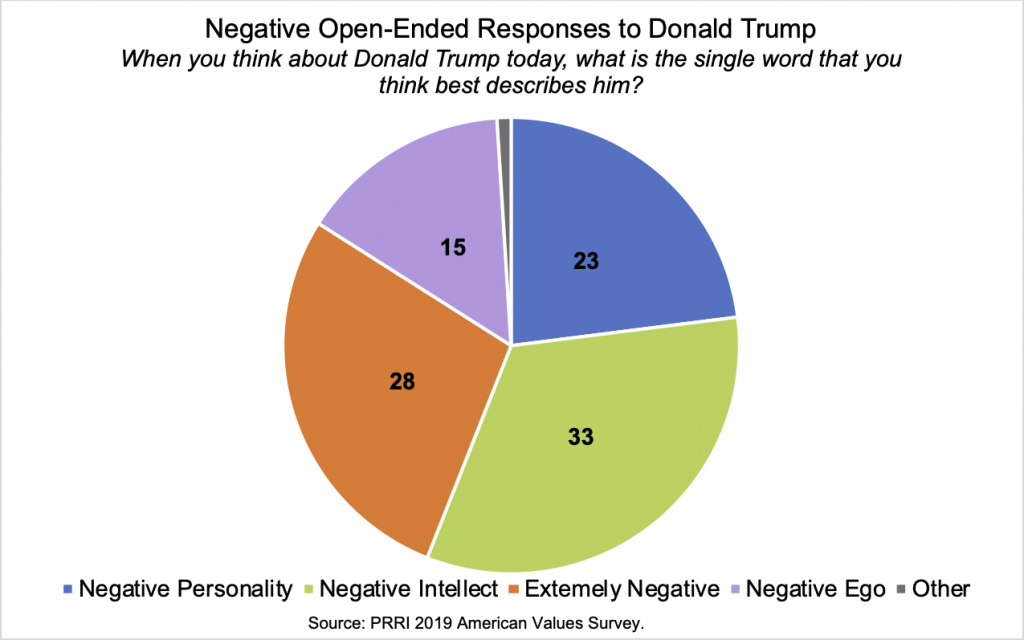 Respondents who describe Trump negatively are more likely to identify as Democrats and be a part of typically Democratic-leaning groups. The Extremely Negative group is particularly likely to be Democratic, while the Negative Ego group is rather less likely. 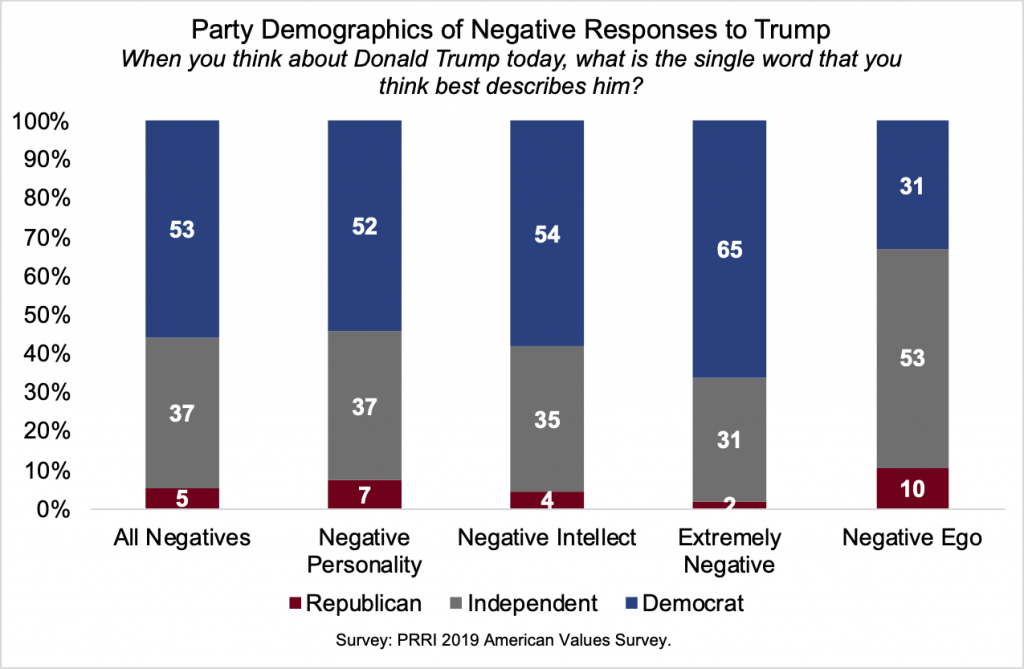 A majority (53%) of people who describe Trump negatively identify as Democrats, while 37% are independent, and only 5% are Republican. Almost two-thirds (65%) of the Extremely Negative group are Democrats as are a majority of the Negative Intellect (54%) and Personality (52%) groups. Three in ten (31%) Negative Ego respondents say they are Democrats, while a majority (53%) identify as independent.

Americans who speak critically about Trump are somewhat more likely to say they are moderate than liberal (45% vs. 37%), while only 17% identify as conservative. Almost half (48%) of the Extremely Negative group are liberal as are about one-third of the Negative Intellect (36%) and Personality (32%) groups. The Negative Ego group is equally likely to include liberals (27%) and conservatives (27%). 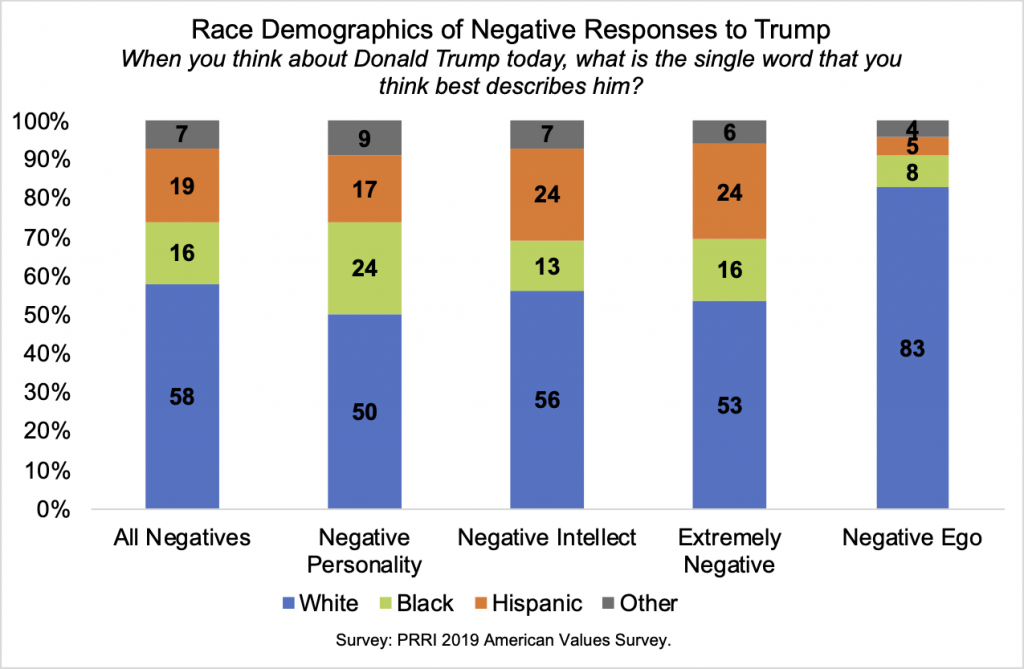 People who are negative to Trump are somewhat less likely than Americans overall to include whites (58% vs. 63%) and more likely to include black Americans (16% vs. 12%). White Americans make up a slim majority of the Negative Intellect (56%), Extremely Negative (53%), and Negative Personality (50%) groups. The Negative Ego group is somewhat less diverse, with more than eight in ten (83%) white Americans and less than one in ten black (8%) or Hispanic (5%) Americans.

Despite the notable political and ideological differences among these four groups, these divides do not appear across most other demographics. Indeed, there are no major differences across gender, age, educational, and geographic lines. 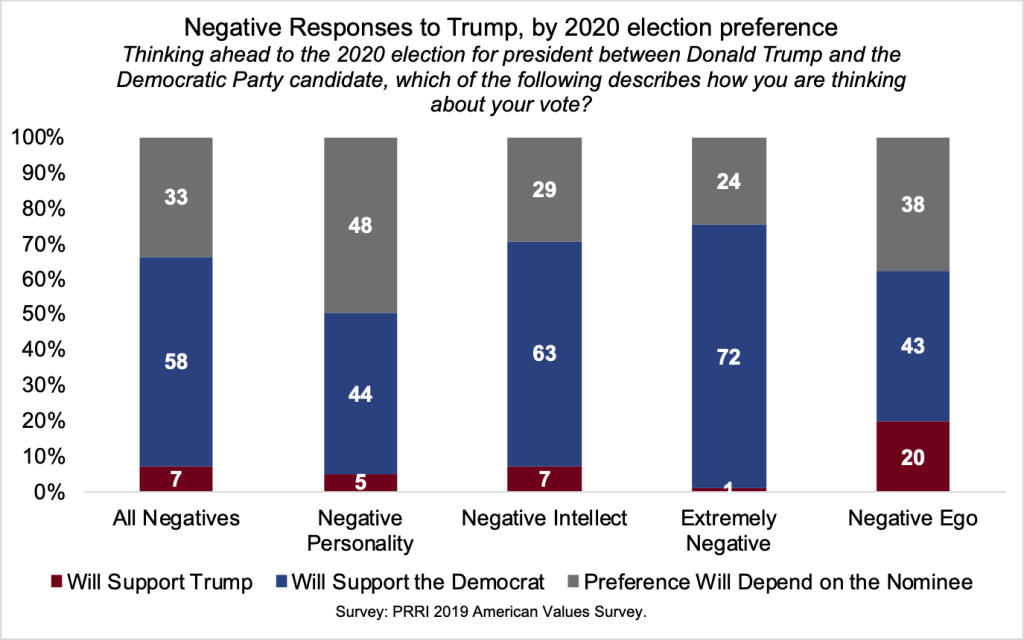 Almost six in ten (58%) Americans who spoke negatively about Trump say they would support the Democratic candidate regardless of who became the nominee, while one-third (33%) say their preference will depend on who becomes the nominee. Less than one in ten (7%) say they will support Donald Trump. The Extremely Negative group stands out as particularly likely to say they will support the Democratic candidate (72%) while more than six in ten (63%) members of the Negative Intellect group agree. Americans are split between preferring to support the Democratic candidate and saying their preference will depend on the nominee among both the Negative Personality (44% vs. 48%) and Negative Ego (43% vs. 38%) groups. One in five (20%) people critical of Trump’s ego say they will support him in the 2020 election compared to less than one in ten of the other three groups.

Americans who speak negatively about Trump display notable differences by critique in their voting in the 2016 presidential election. More than six in ten (62%) Americans who speak negatively about Trump say they voted for Hillary Clinton, while about one in ten did not vote (13%), voted for Trump (8%), or voted for a third-party candidate (8%). The Extremely Negative group is the most pro-Democratic group with three in four (75%) voting for Clinton compared to about six in ten in the Negative Personality (61%) and Negative Intellect (57%) groups. Just under half (49%) of the Negative Ego group reports voting for Clinton, while nearly one in four (24%) say they voted for Trump.

Majorities of Americans who speak negatively about Trump consider health (72%), climate change (62%), and race relations (56%) to be critical issues. Majorities of the Negative Personality, Negative Intellect, and Extremely Negative groups all are most likely to regard these three issues as critical. But the Negative Ego group is more likely to consider health care (63%), terrorism (54%), and race relations (53%) as critical.