White Christian nationalism has become a focus of political discussion in America in recent years as American conservatives and many prominent Republicans have embraced the personalities and ideas of this political orientation. In addition to the attention paid to the subject by the media and prominent politicians, some political commentators have pointed out that legislation targeting lesbian, gay, bisexual, and transgender (LGBT) people, eliminating anti-racist subjects in schools, and attacking reproductive rights is influenced by the principles of white Christian nationalism.

What Is Christian Nationalism?

Christian nationalism is defined by scholars as a “cultural framework that idealizes and advocates a fusion of Christianity with American civic life.” But what does this look like in practice? PRRI’s American Values Survey shows that almost three-quarters of Americans believe the United States has always been a force for good in the world, and more than half say there has never been a time when they were not proud to be American. Numerous surveys also show that a majority of Americans affiliate with a Christian religious tradition. Do these findings mean a majority of Americans are Christian nationalists?

In short, no. That is because Christian nationalism is not just about religious affiliation or about being a proud American. The “fusion” of Christianity with American civic life refers not just to the idea that America is a nation founded by Christians, but that current American social and political institutions should explicitly privilege conservative Christian beliefs—to the extent that conservative Christians are understood to be white, straight, and cisgender.

For example, white Christian nationalists in the United States are more likely to believe that police treat Black and white Americans the same, and that police shootings of Black Americans occur because Black people are more violent. Religious Americans—that is, people who regularly participate in religious activities and believe faith is important in their lives—are more likely to hold the opposite views. Survey data show similar patterns for attitudes toward religious minorities and immigrants.

White Christian nationalism and religiosity, though, can have similar effects on attitudes about sexuality, gender, and family. That is because both white Christian nationalists and most very committed religious people in America are more likely to believe that gender is a key, unchanging organizing principle of society and the heterosexual family is the safeguard for society’s values. How are these views applied to vote choices, and what does that mean for LGBT candidates?

My recent research answers these questions using data from the CalSpeaks survey, which periodically measures attitudes and behaviors of non-institutionalized Californians over the age of 18. This survey used a subsample (about 700 people) of the regular CalSpeaks panelists to ask specific questions designed by a small group of researchers. In this case, I asked survey participants if they supported lesbian and gay or transgender candidates for different levels of political office, as well as several questions designed to measure support for the principles of Christian nationalism, like believing the federal government should declare the United States a Christian nation. 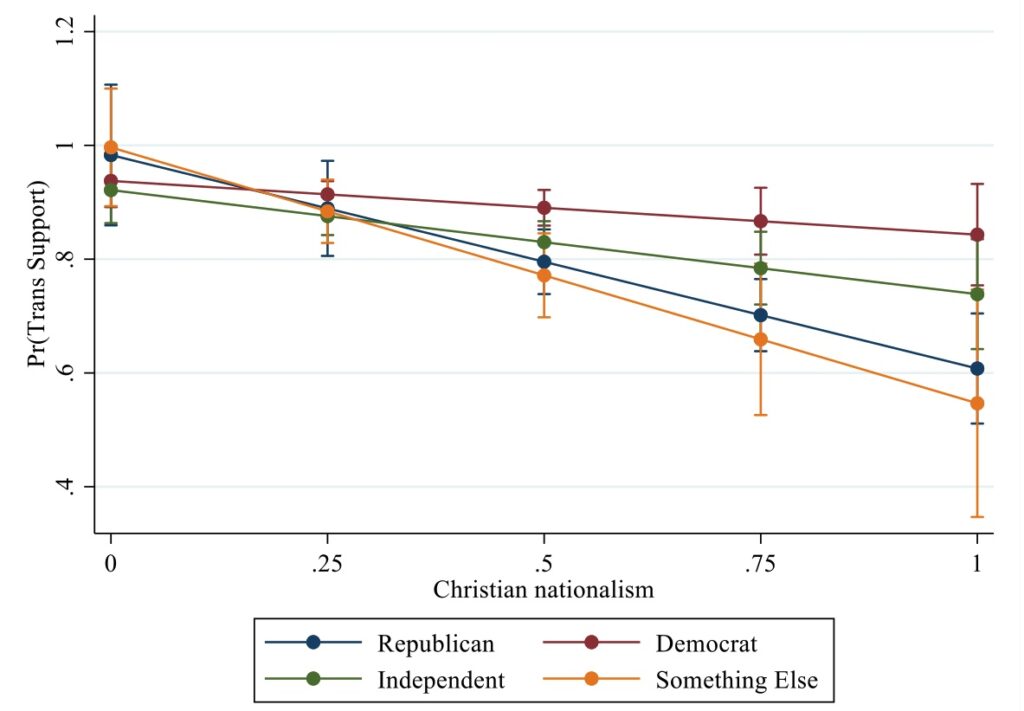