Recent PRRI polling shows that Black Americans are significantly more skeptical of the death penalty’s fairness with regards to race than other racial groups. According to the PRRI 2022 Social Networks Survey, 87% of Black Americans completely agree (62%) or mostly agree (25%) that a Black person is more likely than a white person to receive the death penalty for the same crime. In contrast, only 53% of white Americans believe the same (22% completely agreeing, 31% mostly agreeing). 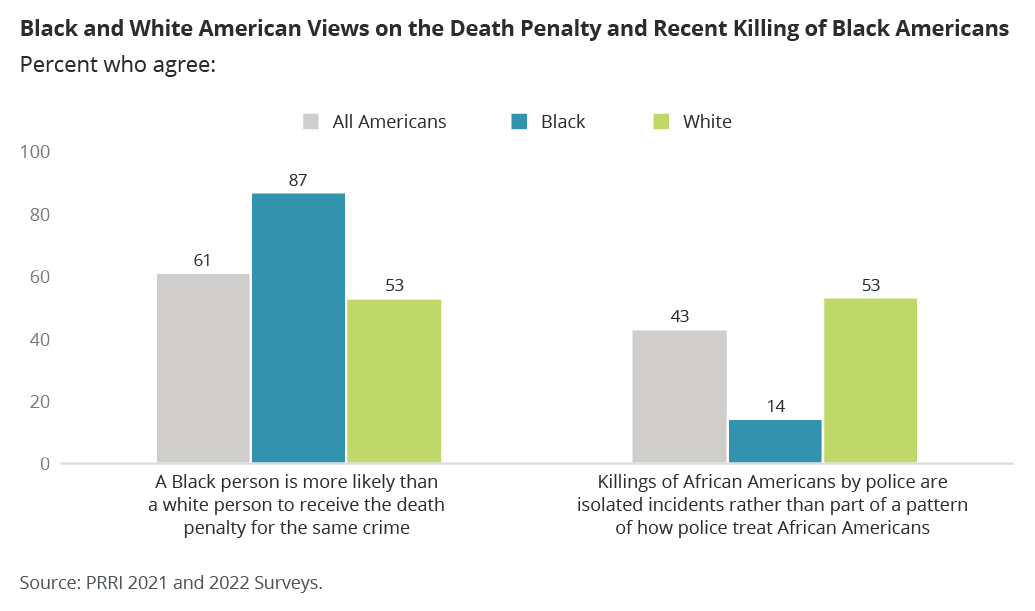 Black Americans’ skepticism here is understandable given the long history of discrimination and racial inequality in American criminal justice. Throughout U.S. history, Black Americans have been targeted, arrested, and incarcerated disproportionately at nearly every turn, and have borne the burden of the popular equation of blackness and criminality from public and law enforcement alike. Black Americans’ survey responses on the matter of capital punishment align with their views of other aspects of the criminal justice system, like policing. As PRRI polling has recently shown, only 14% of Black Americans say that killings of African Americans by police are isolated incidents rather than part of a larger pattern, in contrast to 53% of white Americans.

This skepticism is also understandable given Black Americans’ experiences with the death penalty itself. Throughout American history, Black Americans have been executed at rates far surpassing that of whites. Such executions were routinely attempts of racial control, with certain crimes formally defined as capital only for Black defendants. According to one study, from the early nineteenth century through the mid-twentieth, rates of African American executions were on average almost nine times that of whites.

Politicians and law enforcement leaders in the late nineteenth and early twentieth centuries were often unapologetic in naming capital punishment as a system of racial control of African Americans. In 1927, a former Arkansas governor declared that “If the death penalty were to be removed from our statute-books, the tendency to commit deeds of violence would be heightened owing to this negro problem. The greater number of the race do not maintain the same ideals as whites.” As historian Stuart Banner has put it, “Until relatively recently, both the law and the drama of capital punishment were soaked in racism.”

The U.S. Supreme Court declared the practice of capital punishment unconstitutional in 1972’s Furman v. Georgia based on its arbitrary quality. However, the Court reinstated the death penalty in 1976’s Gregg v. Georgia, after the development of new state procedures aimed at fairness. In 1987’s McCkeskey v. Kemp, in response to statistical evidence showing continued racial disparities in executions, the Court determined that such disparities did not prove actual purposeful discrimination, and allowed executions to continue.

However, as scholars have thoroughly documented, race nonetheless matters for the application of the death penalty. For example, one wide-ranging study of modern death penalty cases by Scott Phillips and Justin Marceau showed how defendants who have been convicted of killing a white victim are seventeen times more likely to be executed than those who have killed a Black victim (defendants convicted of killing a Black victim were almost never executed). Critical contemporary observers have also noted how racial bias has been evident in individual death penalty cases in recent years, from continued exclusion of African Americans from juries to racist behavior by prosecutors and even defense counsel.

Black Americans’ skepticism of the death penalty’s fairness likely stems from awareness of these historical and contemporary problems. Though inequities around capital punishment may not be as overt as in earlier periods of American history, and the number of executions themselves comparatively small, America’s criminal justice system still contains notable disparities and lacks the trust of a significant portion of the nation’s citizens.

Aaron Griffith is a member of the 2021-2022 cohort of PRRI Public Fellows.