The completion of the U.S. withdrawal from Afghanistan at the end of August 2021 escalated the need to resettle Afghans across the United States. Roughly 76,000 Afghans were brought to the U.S., most of whom have already been resettled. The remaining 8,000 are living in military bases until their cases are handled.1 Approximately 2,500 Afghans are still living at U.S. military bases abroad, while others are spread across various countries with “no clear plan of where to head next.”2

To better understand Americans’ views of refugees specifically, in September 2021, PRRI asked them if they favor or oppose passing a law to prevent refugees from entering the United States. About six in ten Americans (59%) opposed passing this law, compared to about four in ten (39%) who favored it. While opposition went up from 59% in 2017 to 64% in 2019, it bounced back in 2021. By contrast, support for this policy has stayed constant since 2017 (36%).

In the same survey, we asked the same question but focused on refugees from Afghanistan. This time, Americans were notably more opposed to this policy (66% oppose vs. 29% favor) than they were when thinking about refugees in general (59% oppose vs. 39% favor). 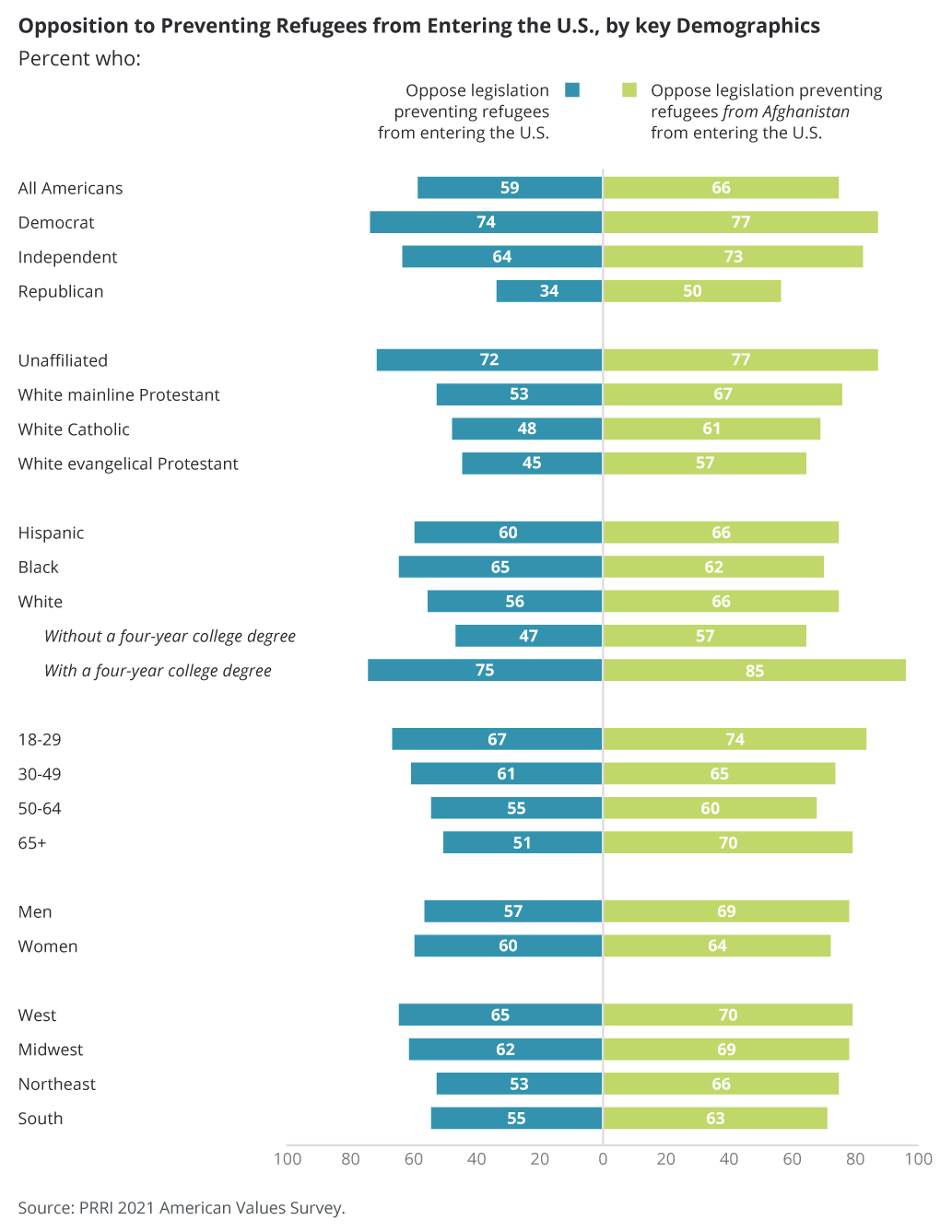 By contrast, opposition to passing legislation that prevents refugees from entering the United States decreases with age, from Americans ages 18–29 (67%) to Americans ages 30–49 (61%), Americans ages 50–64 (55%), and Americans 65 and over (51%). There are no notable differences among those in the middle age categories when they think about refugees from Afghanistan, but younger and older Americans are notably more likely to oppose this policy (74% and 70%, respectively).

While there are no differences between men (57%) and women (60%) in opposition to banning refugees from entering the United States, when refugees from Afghanistan are specified, more men are opposed to this policy than women (69% vs. 64%).

3 It is worth noting that Afghan refugees are resettled outside the context of the refugee admissions program. https://www.whitehouse.gov/briefing-room/presidential-actions/2021/02/04/executive-order-on-rebuilding-and-enhancing-programs-to-resettle-refugees-and-planning-for-the-impact-of-climate-change-on-migration/, https://www.migrationpolicy.org/programs/data-hub/charts/us-annual-refugee-resettlement-ceilings-and-number-refugees-admitted-united

4 The number of cases for all other religious groups is <100.

Related Research
Welcoming Immigration Policies Remain Popular, But Immigration Is Not a Critical Issue for Most Americans
Competing Visions of America: An Evolving Identity or a Culture Under Attack? Findings from the 2021 American Values Survey
Thanks for signing up!
Tweet
Tweet
Tweet