Football remains America’s most popular sport to watch. Nearly four in ten (39%) Americans say football is their favorite sport to watch, between three and four times the number who mention basketball (12%), baseball (10%), or soccer (8%), the next most popular sports in the country. Only about one in 20 Americans say auto racing (6%) or ice hockey (5%) is their favorite sport. Thirteen percent of the public say they do not watch sports at all.

Across generations, there are notable differences in the type of sports Americans prefer to watch. Young adults (age 18-29) are far more interested in soccer and basketball than older Americans, while seniors (age 65 and older) are much more likely to follow baseball. Young adults are nearly three times as likely as seniors to say soccer is their favorite sport to watch (14% vs. 5%, respectively). In contrast, seniors are more than four times more likely than young adults to say baseball is their favorite sport (18% vs. 4%, respectively).

Football is a more popular pastime among men than women. More than four in ten (43%) men—compared to roughly one in three (35%) women—say football is their favorite sport. In contrast, women are far more likely than men to report that they do not follow sports at all (18% vs. 7%, respectively).

Among black Americans, football (46%) and basketball (30%) are by far the most popular sports. Roughly four in ten (39%) white Americans also say football is their favorite sport, while roughly similar numbers say they prefer baseball (12%), basketball (9%), and hockey (8%). Hispanic Americans are about as likely to say football (30%) and soccer (24%) are their favorite sports to watch. 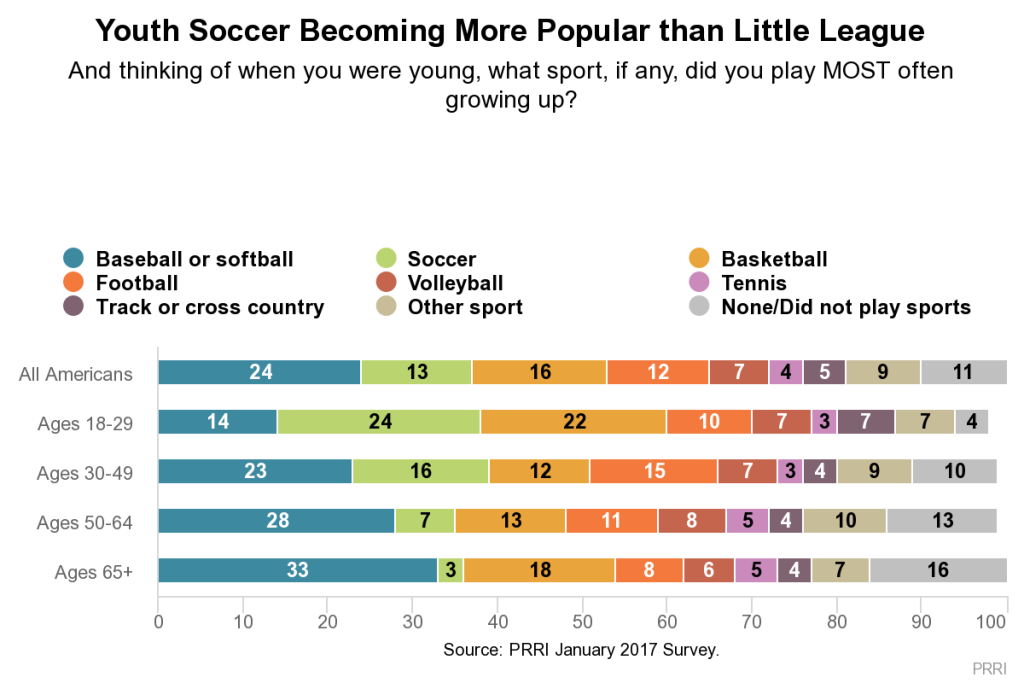 Interest in the Super Bowl Unchanged from Previous Years

Close to half (46%) of the public report they are very likely to watch the Super Bowl this year. Roughly one-quarter (23%) say they are somewhat likely, while nearly one-third (31%) say they are not too or not at all likely to tune in. Interest in the Super Bowl is roughly similar this year to past years—in 2016, 43% of the public said they would be very likely to watch the game. There are few differences between Americans of different racial and political backgrounds.

However, men and women report considerably different levels of interest in the Super Bowl. A majority (52%) of men but only 40% of women say they are very likely to watch the big game.

The Supernatural in Sports (and the Election)

One-quarter (25%) of Americans believe God plays a role in determining the outcome of sporting events. Nearly three-quarters (73%) of the public disagree. There are significant disagreements among Americans about the role that God plays in sports by religious background. 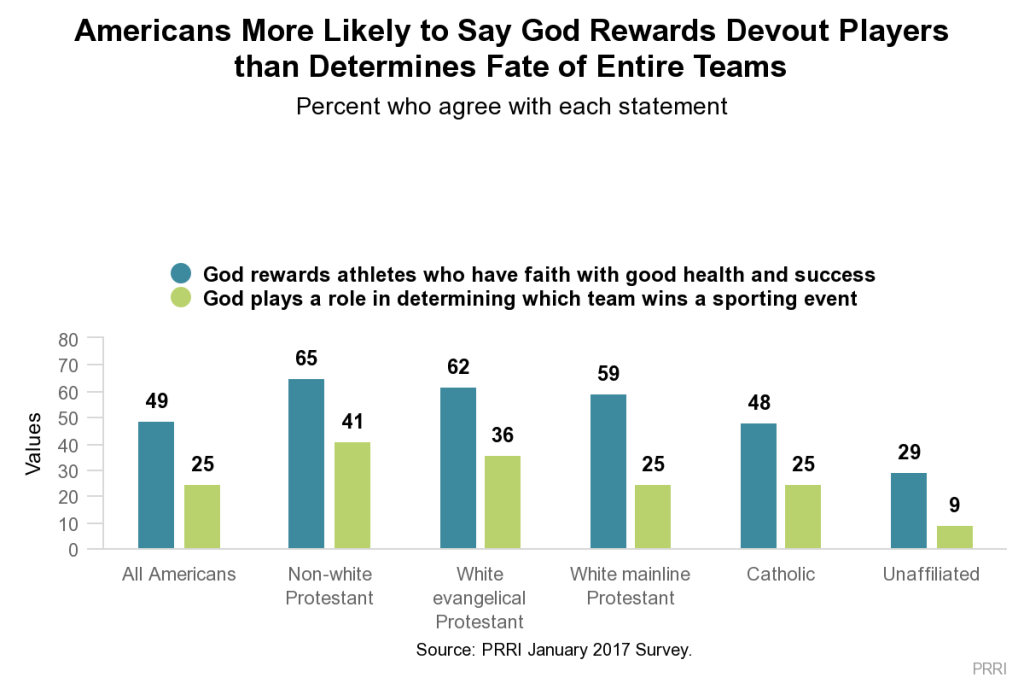 Nearly half (49%) of the public believes God rewards athletes who have faith with good health and success; about as many (47%) disagree. Strong differences of opinion are evident between Americans of different religious affiliations.

In comparison, more than one-quarter (28%) of Americans believe God played a major role in determining the outcome of the 2016 election. Thirteen percent say God played a minor role and a majority (55%) say God did not play any role at all in the presidential election. Perceptions about God’s influence in politics varied markedly by political and religious affiliation.

Close to half (45%) of Republicans believe God intervened to help President Donald Trump win the presidency, compared to 26% of independents and only 18% of Democrats. Nearly seven in ten (69%) Democrats believe God had no hand in determining the outcome of the election. 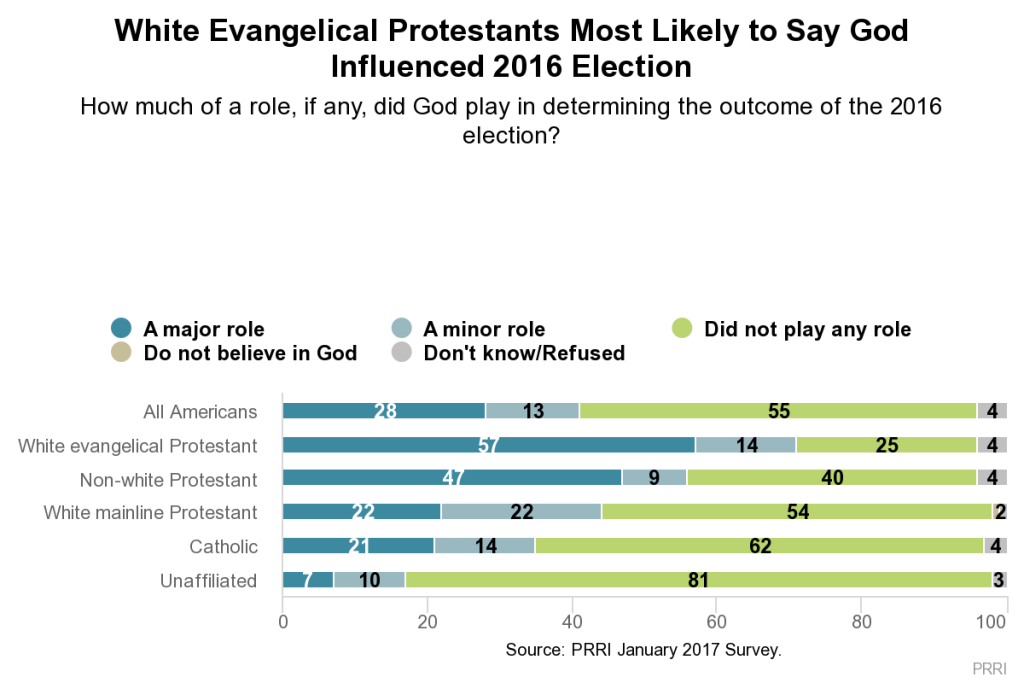 Close to two-thirds (63%) of Americans consider themselves to be a fan of a particular sports team. Among sports fans, one in five (20%) report that they believe their team has been cursed at some point, while more than one-quarter (28%) say they have prayed for God to help their team.

In the past few years, several professional football teams have hired female coaches. Despite some early criticism, most Americans are not opposed to these changes. Only 22% of Americans believe it is inappropriate for women to coach men’s professional football teams. More than three-quarters (77%) of the public say there is no problem with women coaching men’s teams. The extent to which Americans believe it is appropriate for women to coach men’s teams varies considerably by political affiliation, education, and age. Notably, men and women are similarly supportive of women coaching men’s teams.

Republicans are nearly twice as likely as Democrats (27% vs. 15%, respectively) to say it is not appropriate for women to be coaching men’s professional football teams. The views of independents are not distinguishable from the general public overall.

There is a similar-sized gap by education. Americans with a high school education or less are twice as likely as those with a four-year college degree to believe that women should not be coaching men’s football teams (30% vs. 15%, respectively).

Seniors report a much greater degree of discomfort with the idea of women coaching men’s teams than young adults. More than one-third (34%) of seniors say it is not appropriate for women to be coaching men’s professional sports teams, a view shared by only 15% of Americans under the age of 30. 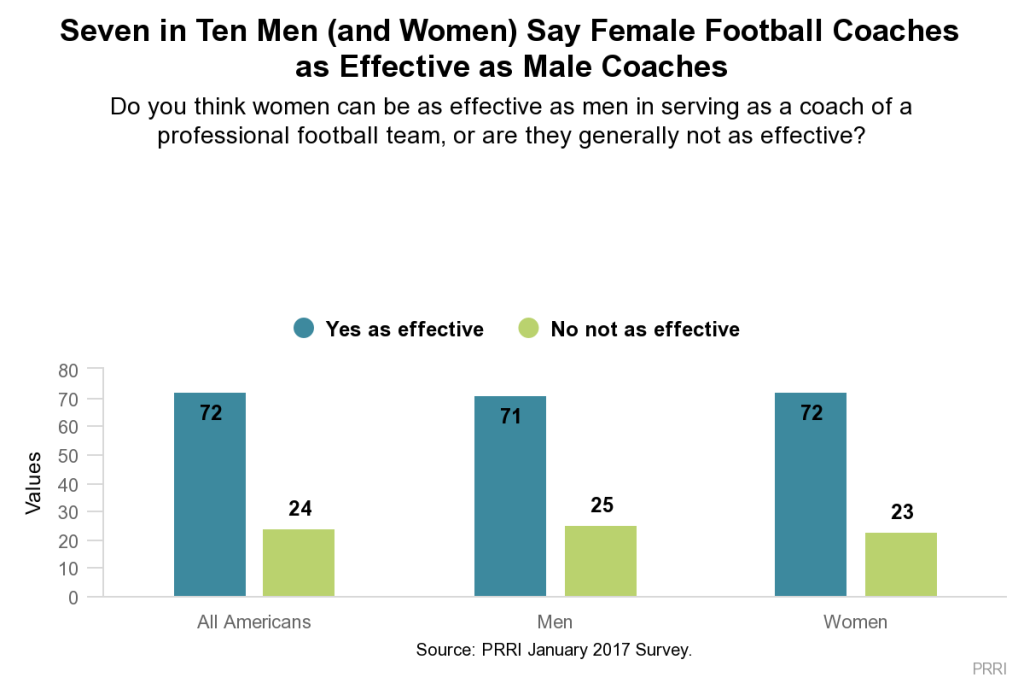 About one-quarter (24%) of Americans believe female coaches are not as effective as male coaches in the professional football league. More than seven in ten (72%) Americans disagree.

Republicans are twice as likely as Democrats to believe women coaches of male teams are less effective than men (36% vs. 18%, respectively). Independents express views that align with the general public.

Seniors are also much more likely than young adults to doubt the efficacy of female coaches. Thirty-six percent of seniors—compared to 23% of young adults—say that female coaches of men’s professional football teams are less effective in doing the job than men. 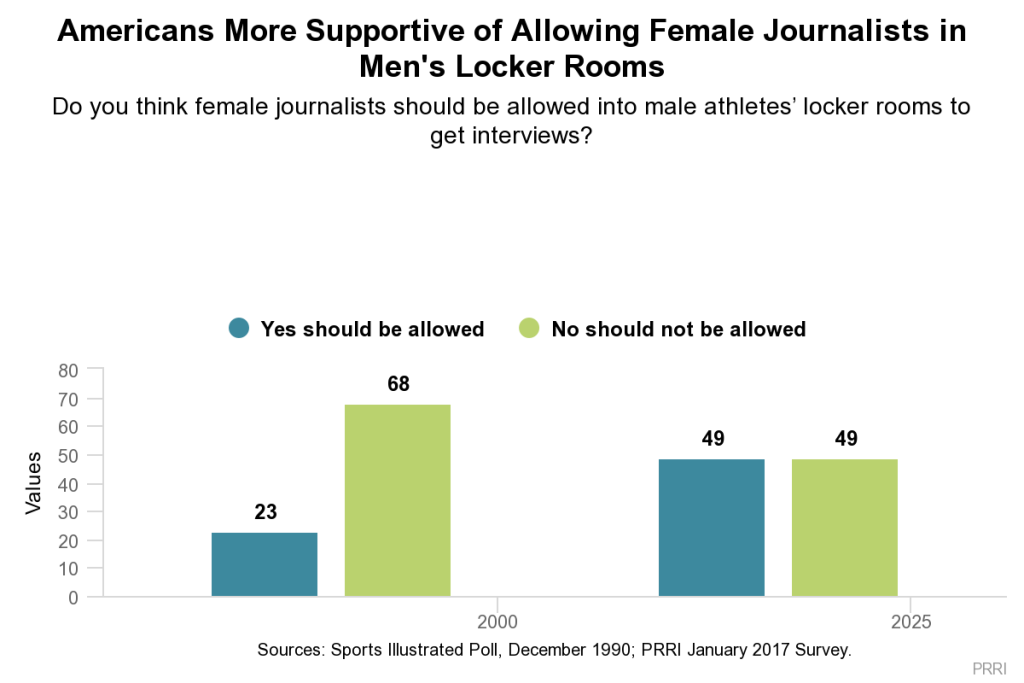 Notably, men are significantly more likely than women to say female sports reporters should be allowed to enter men’s locker rooms as part of their job (54% vs. 44%, respectively).

There is also a sizable generation gap. Young adults are much more likely than seniors to approve of granting female journalists access to men’s locker rooms (54% vs. 39%, respectively).

Sports fans are also more comfortable with granting female journalists access to their sources than those who do not follow sports. A majority (53%) of Americans who are fans of a sports team say women sports reporters should be allowed to enter the locker rooms of male athletes to conduct interviews. However, even among sports fans there is a significant gender gap. Nearly six in ten (59%) male sports fans support allowing female journalists access to locker rooms compared to less than half (46%) of female sports fans.

Politics: A majority (58%) of the public say they are not bothered when professional athletes make public statements about political issues. However, a significant minority (40%) report they are bothered when athletes stake out a public position on political topics. 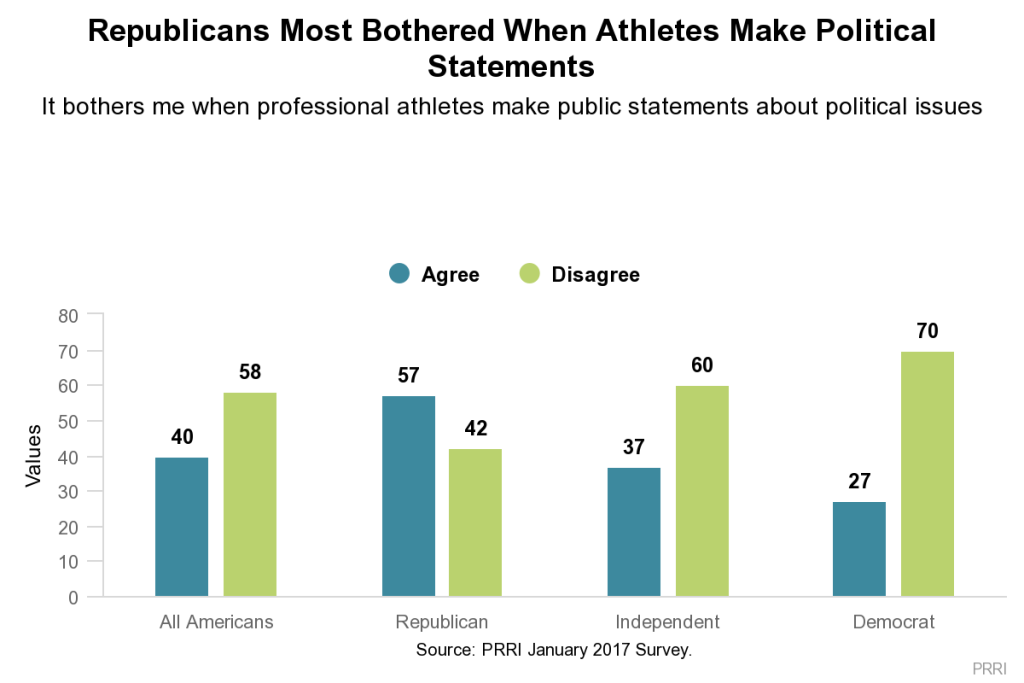 There is a stark partisan division in the views about the political behavior of professional athletes. A majority (57%) of Republicans say they are bothered when athletes take a political stand, while only 27% of Democrats agree. Seven in ten (70%) Democrats say this does not bother them at all. Political independents largely reflect the broader public view on this issue.

Again, there are considerable differences of opinion between Democrats and Republicans. Nearly two-thirds (64%) of Republicans believe professional athletes should be barred from using marijuana, while only about one-third (35%) of Democrats agree.

God: Nearly half (49%) of Americans report they approve when athletes express their faith publicly by thanking God during or after a sporting event. Only four percent of the public express disapproval of an athlete expressing gratitude to a higher power. Forty-seven percent of the public say such displays don’t matter to them one way or the other.

No group is more supportive of athletes’ public displays of religious gratitude than white evangelical Protestants. Nearly eight in ten (77%) white evangelical Protestants say they approve of athletes thanking God during or after a game, compared to 69% of non-white Protestants and about half of white mainline Protestants (49%) and Catholics (50%). Only 18% of the religiously unaffiliated say they approve of these types of acts. However, only four percent of religiously unaffiliated Americans express disapproval of athletes thanking God; 78% say this behavior does not bother them.

Americans take exception giving children sports participation trophies—trophies awarded for participating in the game regardless of the outcome. More than six in ten (62%) Americans believe only the winning players should receive trophies while 36% say all players should get them. Views about participation trophies do not vary by age, gender, or religious affiliation, but there are notable differences by political affiliation and race/ethnicity. 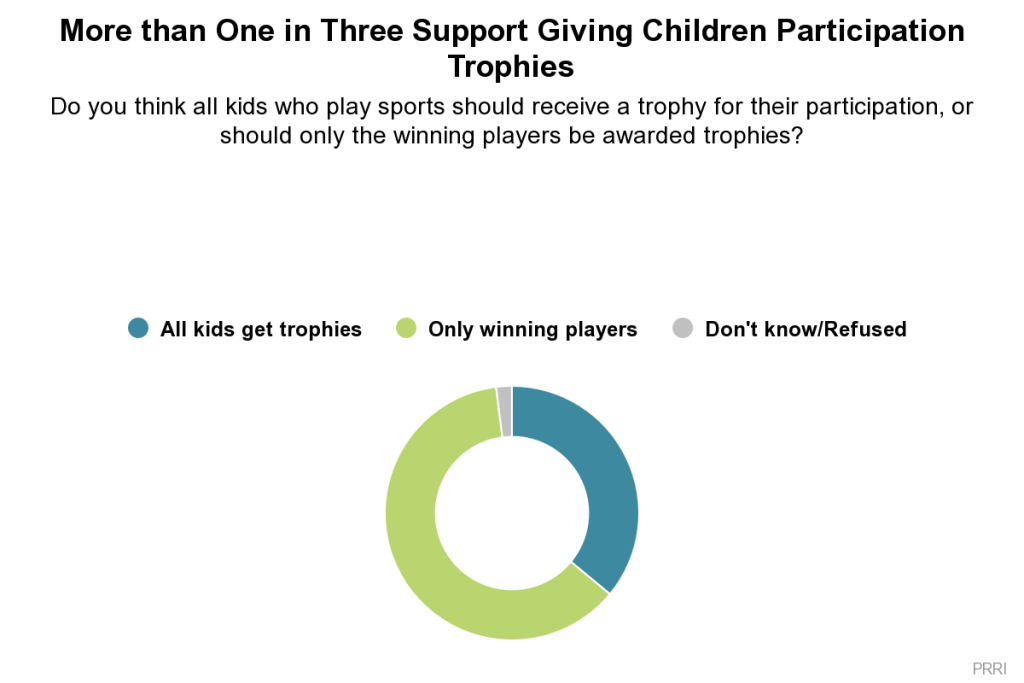 More than half of black (52%) and Hispanic (51%) Americans support awarding trophies to all children who participate in a sporting event. In stark contrast, only 28% of white Americans agree with giving out trophies to all players.

Notably, parents with children under the age of 18 living in their home do not express greater support for participation trophies than those without children: 36% of adults with underage children say all participants should be rewarded with a trophy, the same as all adults without children (36%).

Featured image by cliff1066, with modifications made by PRRI.

CNN
These Americans think God had a hand in the election

The Huffington Post
HUFFPOLLSTER: Most Republicans Think The Media Wants Trump To Fail

Religion News Service
Does God give a holy hoot about the Super Bowl?
Related Research
Ahead of Super Bowl, Heightened Concern Over Dangers of Football
Nearly One-Third of Americans Say They Would Not Let Their Son Play Football
Nearly One in Three Support Lifetime Ban for Football Players Who Commit Domestic Violence
Thanks for signing up!