America as a Moral Example to the World

Fewer than half (40%) of the public believes that the U.S. sets a good moral example for the rest of the world. Nearly six in ten (58%) believe we do not. Views have been remarkably stable since 2015 when only 43% of Americans said the U.S. provided a good moral example. 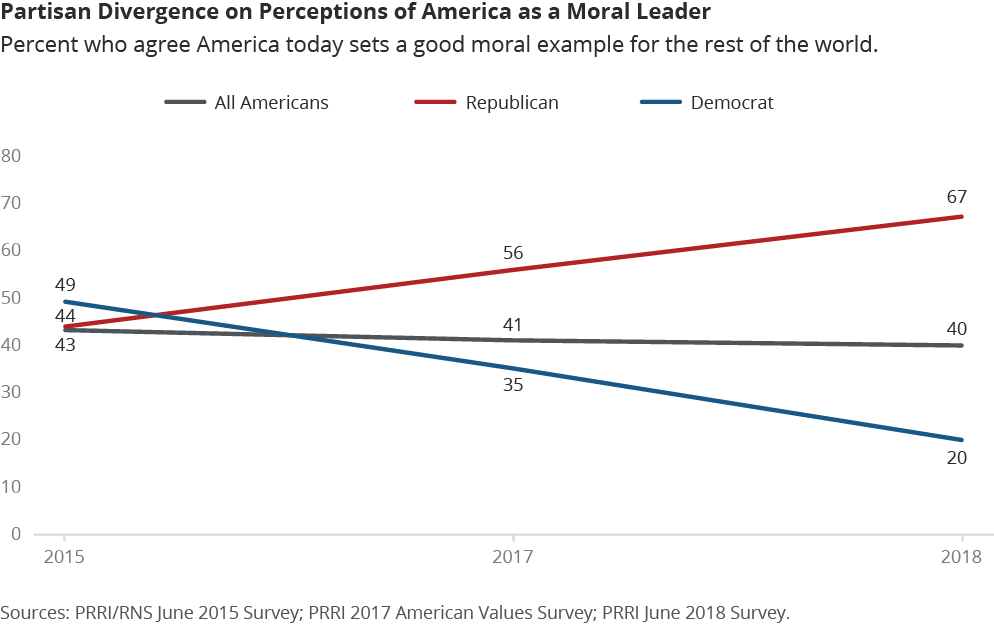 Americans largely reject the policy whereby families entering the country without permission are treated as criminals and children are separated from their parents. Only 22% of the public expresses support for this policy. More than seven in ten (71%) Americans oppose such a policy that would separate immigrant children from their parents.

The overwhelming number of Democrats (94%) and a large majority of independents (76%) oppose a policy that treats migrant families as criminals requiring separation of parents and children. Half (50%) of Republicans support a policy of family separation while 40% are opposed to it. Notably, 10% of Republicans express no opinion on the issue.

Majorities oppose this policy among every significant racial and ethnic group, but there are still substantial differences in their level of opposition. While nearly two-thirds (66%) of white Americans oppose a policy that treats migrant families as criminals and separates families, the overwhelming majority of Hispanic (82%) and black (93%) Americans hold this view.

America’s largest religious communities are generally opposed to a policy that charges immigrants as criminals and separates families. Although white evangelical Protestants have been ardent supporters of President Trump, only 36% favor this policy while a slim majority (51%) are opposed. Thirteen percent of white evangelical Protestants register no opinion on the subject of family separation. Even larger majorities of white mainline Protestants (60%), Catholics (74%), non-white Protestants (87%) and religiously unaffiliated Americans (82%) express opposition to family separation at the border. 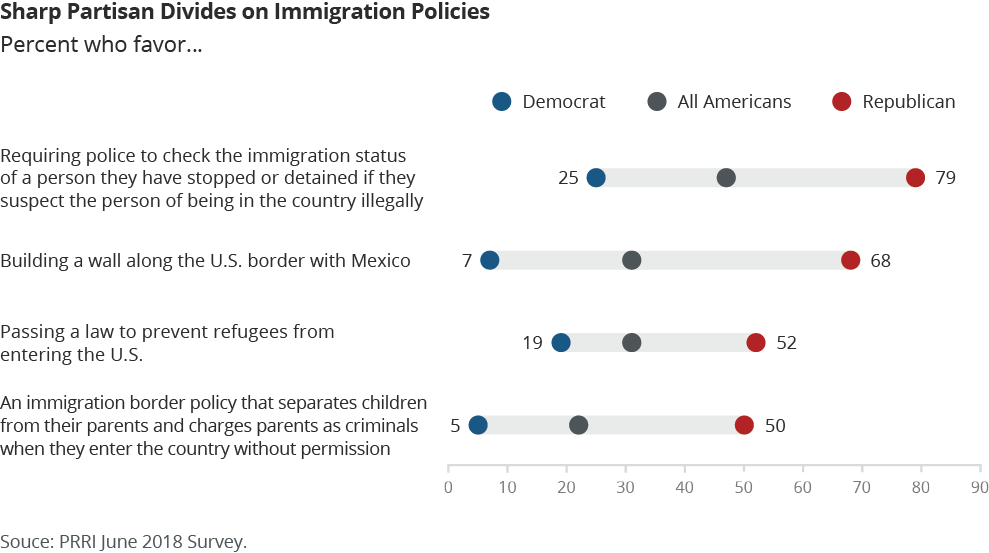 Preventing Refugees from Coming to the U.S.

Americans are also largely opposed to passing a law that would prevent refugees from coming to the U.S. Only about one in three (31%) Americans say they favor such a policy while roughly six in ten (59%) are opposed to it. Notably, 10% of Americans do not offer an opinion on this issue.

The issue reveals stark partisan differences. A majority (52%) of Republicans favor a policy that would prevent refugees from entering the U.S. Thirty-six percent of Republicans oppose it, and another 11% offer no opinion on the matter. Roughly three-quarters (76%) of Democrats and more than six in ten (62%) independents register opposition to this policy.

The public is not any more supportive of building a wall along the U.S.-Mexico border. Thirty-one percent of the public favor the construction of a wall while 63% are opposed. Public views have not changed significantly over the past six months. In 2017, roughly one-third (36%) of Americans expressed support for the construction of a wall along the country’s southern border.3

Political differences are again stark. More than two-thirds (68%) of Republicans support building a border wall while 27% of independents and only 7% of Democrats agree. Nearly nine in ten (89%) Democrats oppose building a wall along the U.S.-Mexico border.

Americans are more divided over whether police should be required to check the immigration status of a person they have stopped or detained if suspected of being in the country illegally. Nearly half (47%) support this policy while an identical proportion (47%) oppose it.

Familiar partisan divisions are evident on this policy. Nearly eight in ten (79%) Republicans favor requiring police to check on immigration status of those they detain while only one-quarter (25%) of Democrats agree. Roughly seven in ten (71%) Democrats oppose this requirement. Independents closely mirror the public overall.

America as a Refuge vs. Self-Deportation

Americans largely agree that the U.S. should provide refuge and protection for people who come to the U.S. when they are facing serious danger in their home country. Three-quarters (75%) of the public affirm this statement while roughly one in four (23%) reject it. Views have remained relatively stable since 2014 when 71% of the public agreed that the U.S. should offer refuge and protection to those facing danger in their home countries.4

There is more partisan agreement on this question than most immigration policies, although notable differences in intensity persist. A majority of Republicans (54%), independents (75%) and Democrats (90%) say the U.S. should be a refuge for vulnerable migrants.

The public is generally opposed to the notion of self-deportation, and do not believe that the best way to solve the country’s illegal immigration problem is to make conditions so difficult that immigrants return to their home country on their own. Only 27% of Americans agree with this idea while two-thirds (67%) reject it.

Who Do You Trust to Handle Immigration?

Democrats overwhelmingly trust congressional Democrats on the issue of immigration (77%), but Republicans are much more likely to trust the Trump administration (47%) than the congressional GOP (30%). Fourteen percent of Republicans and 11% of Democrats say they do not trust anyone to deal with the immigration issue. Independents are roughly aligned with the views of the public overall.

Related Research
Do Americans Think Too Many Immigrants Are Coming to the U.S.? It Depends on Their Country of Origin.
How Immigration and Concerns about Cultural Change are Shaping the 2016 Election | PRRI/Brookings Survey
Thanks for signing up!