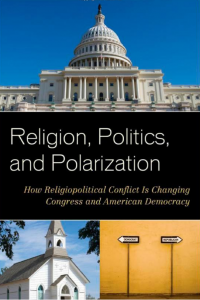 In the book chapter “Toeing the Party Line: The Increasing Influence of Partisanship among White Protestants and White Catholics,” PRRI CEO Robert P. Jones  and PRRI Research Director Daniel Cox examine the extent to which white Catholics and white Protestants have become more politically polarized on the issues of abortion and gay and lesbian rights over the past 40 years. The authors find evidence for extensive polarization occurring among white Protestants on the issue of legal abortion and views about the morality of same-gender sexual relationships. Political polarization has been more modest among white Catholics.

Related Research
Abortion and Vote Choice Among the White Working Class
Fact Sheet | Gay and Lesbian Issues
What Do Catholics Think About the Contraception Mandate?
Thanks for signing up!
Tweet
Tweet
Tweet