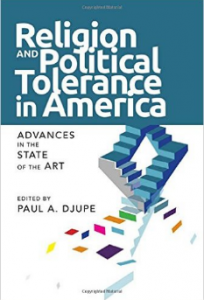 PRRI CEO Robert P. Jones, PRRI Research Director Daniel Cox, and Juhem Navarro-Rivera explore the enduring negative feelings towards atheists in American society in an edited volume Religion and Political Tolerance in America. Their chapter, “Non-religious Tolerance: American Attitudes toward Atheists, America’s Most Unpopular Religious group,” demonstrates that even as religious tolerance has expanded to include Americans of most religions, atheists remain an outlier in how the public views their inclusion and participation in American public life. The authors argue that this is likely due to a combination of factors: belief in a god is a unifying characteristic of this expanded religious tolerance; atheists have limited social influence because many are not “out”; and the strident tone set by members of New Atheist movement might be alienating believers.