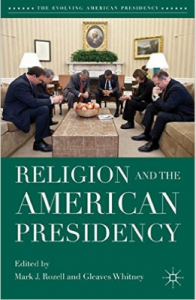 In the updated 2nd edition of Religion and the American Presidency, PRRI CEO Robert P. Jones and PRRI Research Director Daniel Cox provide a new chapter focusing on the role religion plays in the presidency of Barack Obama. Beginning with the backdrop of the 2004 election, when popular media narratives cited “moral values” and “values voters” as major factors in the Democrats’ dramatic losses that year, the chapter “President Barack Obama and his Faith” explores Obama’s religious background and early-life influences before delving into the events that catapulted Obama into the national spotlight. The authors explore how the prominence of Obama’s faith shifted during his first presidential campaign, and lays out the missteps, controversies, and some of the confusion that has persisted through the first three years of Obama’s time in office.

Related Research
Attitudes About Obama’s Religious Beliefs
CNN: “Americans, Their Presidents and Religion”
Are Politicians Talking too Much about Religion?
Thanks for signing up!
Tweet
Tweet
Tweet