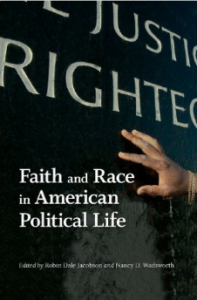 In the chapter “The Black and White of Moral Values: How Attending to Race Challenges the Mythology of the Relationship between Religiosity and Political Attitudes and Behavior,” PRRI CEO Robert P. Jones and Robert D. Francis argue that the popular myths surrounding “values voters” in the 2004 were inaccurate because they did not account for the complex and at times unpredictable interplay of race, religion, and politics. While black Protestants and white evangelical Protestants are the most similar religious groups in terms of belief and practice, their party identification and vote choices are mirror opposites. Common myths about religion and American politics, such as “God Gap” myth, the “Values Voter” myth, and the myth that Democrats have a “God Problem,” the authors argue, are only accurate for white voters. The relationship between race, religion, and politics is not linear or sequential but can be better understood using Bourdieu’s concepts of habitus and field.

Related Research
Out-Polling the Exit Polls: Finally, a Look at Evangelical Democrats
Note to the media: Time for a New Evangelical Script
Thanks for signing up!
Tweet
Tweet
Tweet