Home > Academic Publications > New Book: Spirit and Capital in an Age of Inequality

New Book: Spirit and Capital in an Age of Inequality

Spirit and Capital in an Age of Inequality brings together a diverse group of scholars, activists, and public intellectuals to consider one of the most pressing issues of our time: increasing inequalities of income and wealth that grate against justice and erode the bonds that hold society together. 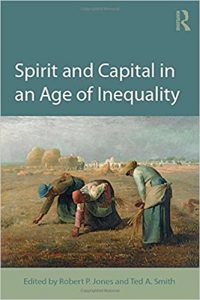 The contributors think through different religious traditions to understand and address inequality. They make practical proposals in relation to concrete situations such as mass incarceration and sweatshops. They also explore the inner experience of life in a society marked by inequality, tracing the contours of stress, hopelessness, and a restless lack of contentment. This book honors the work of Jon P. Gunnemann, who has been a leading scholar at the intersections of religion and economics.

Spirit and Capital in an Age of Inequality will be of interest to undergraduate and postgraduate students as well as scholars of religion and economics. It will be useful to policy-makers and activists seeking a more thorough understanding of the role of religion and theology in public life.

What Others Are Saying:

“This remarkable, timely, and forward-looking collection is much more than a theoretical analysis of why religious ethics should be opposed to great wealth disparities. It offers an astute, fact-based, and fast-paced diagnosis of the often misunderstood factors that drive inequality in the U.S, including the global financial system, race, class, and gender. Authors not only respond with creative theological proposals, they identify practical and effective types of resistance available to religious activists, faith traditions, and faith-based organizations. This is a scholarly book, a hopeful one, and a sure inspiration to anyone seeking a progressive religious politics that can actually get the job done.”
—Lisa Sowle Cahill, Boston College

“A book that I thought would be hard to read was one I found hard to put down.”
—Kelly Brown Douglas, Episcopal Divinity School at Union

“This volume will serve as a critical guide for years to come.”
—David Saperstein, former U.S. Ambassador-at-Large for International Religious Freedom and Director Emeritus at the Religious Action Center for Reform Judaism

Buy Spirit and Capital in an Age of Inequality now at the outlets below: