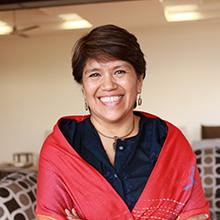 Veronica Montes (she/her) is an associate professor of sociology and co-director of the Latin American, Iberian, and Latina/o Studies minor at Bryn Mawr College in Pennsylvania.

Montes earned her doctorate degree from the University of California at Santa Barbara in 2013. She was also an Andrew W. Mellon Postdoctoral Teaching Fellow at the University of Southern California and its Center for the Study of Immigrant Integration. As a feminist ethnographer, her research falls in two areas: on immigration from Mexico and Central America to the United States, and on the intersection between gender, belonging and migration.

In the spring of 2023, she will be a residential fellow at the Center for U.S.-Mexican Studies at the University of California San Diego, where she will continue her research on the activist nature of transnational motherhood by looking at the family separation due to the U.S. deportation regime and the collective mobilization of deported mothers in Tijuana, Mexico. Her other ongoing research projects revolve around the examination of the precariousness of the social services provided to the Mexican migrant community in Philadelphia in the context of the COVID-19 pandemic; as well as examining the intersection between social inclusion, citizenship, culture production, and Latino immigrants in South Philadelphia.

Montes’ work has been published in journals such as Gender & Society; Gender, Place and Culture; Apuntes; Latino Studies Journal, and several chapters in edited volumes.