President Trump’s recent speech to law enforcement officials in New York sparked criticism after he suggested officers should not be “too nice” to arrested suspects during the course of their duties.

The remark drew immediate rebuke from several police organizations and officials, including the International Association of Chiefs of Police, and the police chiefs of the Los Angeles and New Orleans police departments. The President’s supporters and other police organizations, such as Blue Lives Matter, defended the comment as a joke. PRRI polling reveals sharp divisions by race, ethnicity, and party on the question of the police’s treatment of white, black, and other minority Americans.

The issue of the police’s treatment of black and minority communities sharply divides the American public: A slim majority (52 percent) of Americans believe “police officers treat blacks and other minorities the same as whites,” while nearly as many (47 percent) disagree.

Perceptions differ widely by racial and ethnic background. More than six in ten (64 percent) white Americans say police officers treat all people equitably regardless of race or ethnicity, a view shared by only 37 percent of Hispanic Americans and 19 percent of black Americans. More than six in ten (62 percent) Hispanics and roughly eight in ten (79 percent) blacks do not believe police treat blacks and other minorities the same as whites. 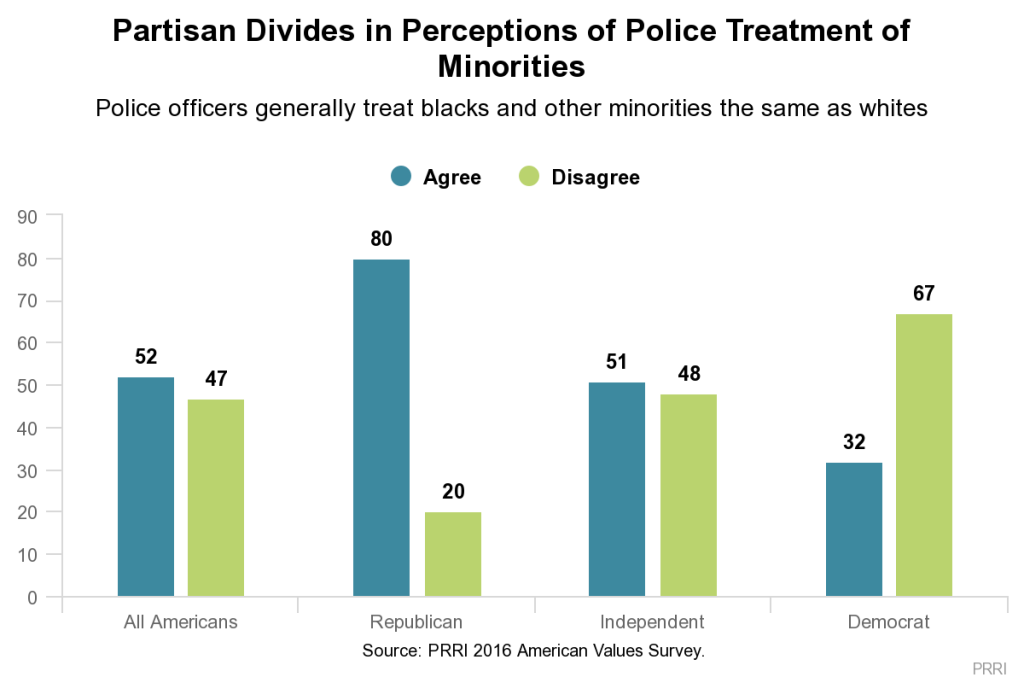 Partisan divisions are nearly as large. Eight in ten (80 percent) Republicans, but fewer than one-third (32 percent) of Democrats, believe police treat black and minority Americans the same way they treat white Americans. Two-thirds (67 percent) of Democrats disagree. The views of independents mirror those of the general public.

Related Research
The Divide Over America’s Future: 1950 or 2050? Findings from the 2016 American Values Survey
“Isolated Incidents” or “Broader Pattern”? Deep Racial Divides on Police Killings of Black Men
Thanks for signing up!
Tweet
Tweet
Tweet