Combining data from the Public Religion Research Institute’s 2020 Census of American Religion and the American Communities Project, we can further understand both the dynamics and the nuances of religious divisions between urban and rural America. PRRI’s county-level estimates of the sizes of major religious groups classified by the American Communities Project county typology reveals a patchwork of faith experiences that illuminates commonalities and differences across the urban-rural divide. 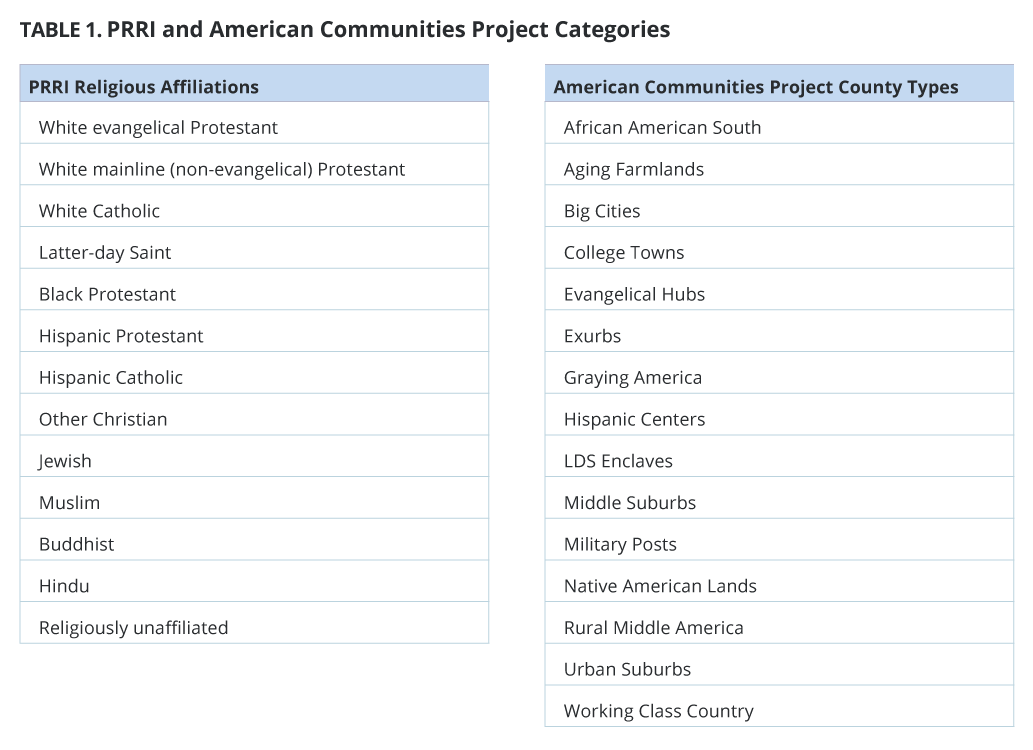 Urban areas are often stereotyped as bastions of secularism, while rural areas are often portrayed as dominated by the traditional church. While these clichés may have grains of truth within them, there is significantly more nuance to the experiences of faith in rural and urban communities.

In the Middle Suburbs counties, 76% of the population claims a religious affiliation. In the Exurbs counties, the figure is 78%. These counties are less densely populated and more racially and ethnically homogeneous, and are more likely than their Big Cities or Urban Suburbs counterparts to follow Christian faiths (75% in Middle Suburbs and 77% in Exurbs). Smaller numbers – roughly one to four percent – follow religions other than Christianity, and less than one in four residents of Middle Suburbs (24%) and Exurbs (22%) are religiously unaffiliated.

Religion outside urban and suburban areas is dominated by Christian beliefs.

While these five community types are mostly white, their geographies and incomes vary. Incomes are lower in Working Class Country counties, centered in Appalachia, and Evangelical Hubs counties, in Appalachia and throughout the South. Along with the African American South next door, these communities comprise the traditional “Bible Belt.” Despite their similarities, cultural tensions often surface as a result of racial and residential segregation.

The three other community types, all middle-income, dominate in the Midwest and the West. Aging Farmlands counties are gathered in the Great Plains. Rural Middle America fills 599 counties in the country’s upper half, from Maine to Montana to Washington. Graying America counties fill the West and are also scattered across the Great Lakes region, the far Northeast, and Florida.

Race and Faith Experiences Outside the Cities

Aside from Big Cities and Urban Suburbs, the only other communities where less than half of residents are white Christians are Hispanic Centers, Native American Lands, and the African American South.

In the African American South, counties concentrated from Virginia to Texas with a median 37% Black population, nearly three in ten residents are Black Protestants (28%), while a similar share are white evangelical Protestants, 13% are white mainline Protestants, and five percent are white Catholics. Different church denominations dot the landscape. In daily life, Blacks and whites tend to segregate, including at church, but in some communities it’s common for Blacks and whites to come together to worship on holidays, including Easter and Thanksgiving. Just 14% are religiously unaffiliated, the smallest share of any community type. With the large share of Black Protestants and white Evangelical Protestants, the African American South has the largest share of Christians of all community types (84%).

Finally, and unsurprisingly, LDS Enclaves counties are predominantly made up of Latter-Day Saints (46%). Around one in ten residents are white mainline Protestants (11%), white evangelical Protestants (10%), or white Catholics (6%). Christians of color make up small shares of the population here: Three percent are Hispanic Catholic, two percent are other Christians, and one percent are Hispanic Protestants. No other religious groups exceed half of one percent, and 21% are religiously unaffiliated.