Millennials are having an identity crisis. Only one-third (34 percent) of Americans age 18 to 35 say that they’re a “millennial,” according to PRRI’s millennial report, while the remaining 66 percent say that the term doesn’t describe them well.

While most millennials avoid adopting the label—whether out of negative connotations it carries or because they are unfamiliar with it—some millennials are more likely to reject it than others. 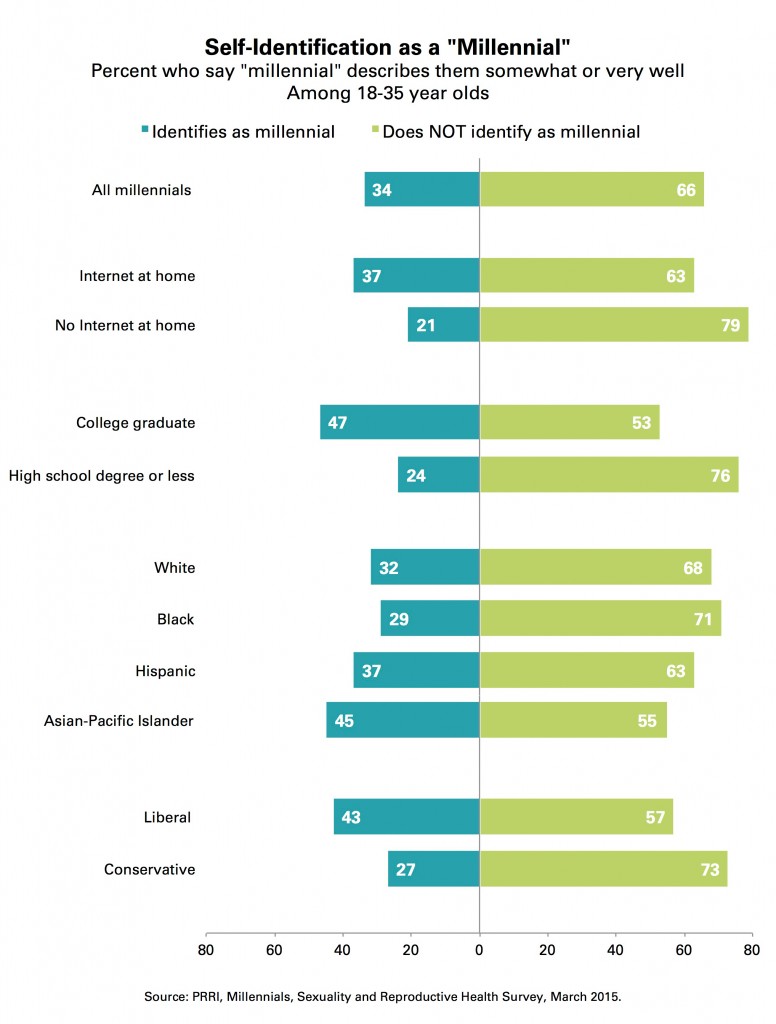 Millennials who are active on social media are more likely to say that the term millennial describes them very or somewhat well. Nearly half millennials who report using Twitter (48 percent) or Tumblr (51 percent) at least daily call themselves “millennials,” compared to 31 percent and 31 percent who say they never use the platform, respectively. In fact, identification as a millennial drops 16-percentage points—from 37 percent to 21 percent—simply if Internet is or isn’t available at home.

Education also impacts identification. Millennials with a college degree are roughly twice as likely as those with a high school degree or less to say “millennial” describes them well—47 percent and 24 percent, respectively.

Asian-Pacific Islander (API) millennials are more likely than any other racial and ethnic group to identify as millennial. Nearly half (45 percent) of API millennials identify with the label, compared to 37 percent of Hispanic, 32 percent of white, and 29 percent of black millennials.

Millennials who are religiously unaffiliated (38 percent) are just as likely as Catholics (38 percent) and somewhat more likely than those who identify as white evangelical Protestant (27 percent) to embrace the generational label.

For more, read “How Race and Religion Shape Millennial Attitudes on Sexuality and Reproductive Health.”

Related Research
How Race and Religion Shape Millennial Attitudes on Sexuality and Reproductive Health
Less Than Half of Millennial Women Identify as “Feminist”
Not All Millennials are Social Media Mavens
Thanks for signing up!
Tweet
Tweet
Tweet