At a recent rally for Alabama Senate candidate Luther Strange, President Trump reignited the debate over whether athletes should be allowed to protest the unfair police treatment of black people by kneeling during the national anthem. In response to his comments, approximately 200 NFL players protested during games the following Sunday. Recent PRRI findings show most Americans do not believe police officers treat white and nonwhite Americans equally.

About four in ten (42 percent) Americans agree police officers treat black people and other minorities the same as white people, while close to six in ten (57 percent) disagree.

Perceptions of the police’s treatment of minorities vary widely by race and ethnicity. More than eight in ten (83 percent) black Americans and nearly two-thirds (65 percent) of Hispanic Americans do not believe police officers are generally equitable in their treatment of blacks and other minorities. White Americans are divided, with roughly as many saying police do treat people the same regardless of race or ethnicity (49 percent) as saying they do not (51 percent). Among white Americans, educational attainment plays a minor role in perceptions of the police’s treatment of minorities. Whites with a college degree are slightly more likely than whites without a four-year degree to say police officers treat whites and minorities differently (55 percent vs. 48 percent, respectively). 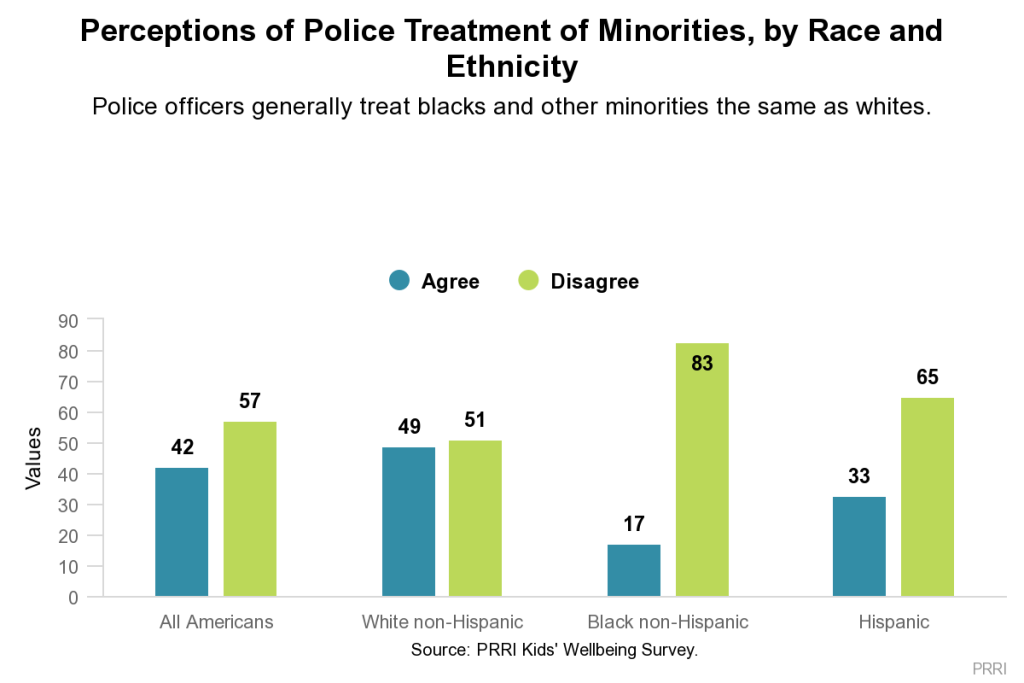 Party affiliation has a substantial influence on perceptions of police treatment, as well. About two-thirds (66 percent) of Republicans say police officers generally treat black Americans and other minorities the same as white Americans, while only about one-quarter (26 percent) of Democrats say the same. Nearly three-quarters (73 percent) of Democrats—including 68 percent of white Democrats—say police officers do not treat blacks and other minorities the same as whites. The views of independents mirror those of the general public.