New analysis suggests that distrust of elites and experts is closely correlated with conspiracy beliefs about the coronavirus pandemic, and those who hold populist anti-elite and anti-expert views are more likely to exhibit conspiracy thinking.

PRRI’s 2020 American Values Survey found that Americans are divided over whether the coronavirus was created intentionally in a lab (50%) or it developed naturally (49%). The same survey measured public trust in several groups and individuals to provide information about the pandemic, including public health organizations, Dr. Anthony Fauci, and the two leading 2020 presidential candidates.

In general, the more Americans trust various leaders, experts, or institutions to provide accurate information about the virus, the less likely they are to believe that the coronavirus was intentionally created in a lab. However, we observed the opposite relationship with then-president Donald Trump: The more Americans trusted Trump, the more likely they were to believe the virus was lab-made. 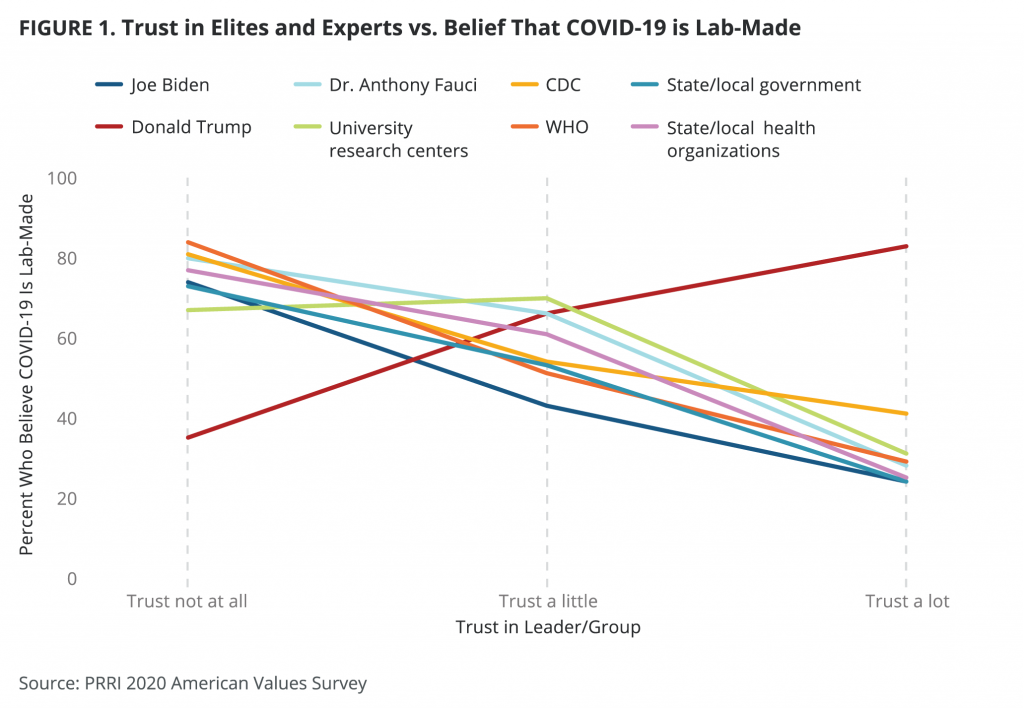 Few Americans reported placing trust in Donald Trump to provide accurate information about the pandemic. Just 14% placed a lot of trust in him, 24% placed a little, and 61% did not trust him at all. Americans were twice as likely to place a lot of trust in then-Democratic presidential nominee Joe Biden (28%), while more than three in ten trusted Biden a little (32%) or not at all (39%).

Results for Asian Americans and multiracial Americans should be interpreted with caution. Sample sizes are N=64 and N=87, respectively.