The U.S. Supreme Court has ruled by a 7-2 margin in favor of a Colorado-based baker who had refused to bake a cake for a same-sex couple out of religious objection. Central to the court’s decision was its disapproval of the handling of the case by the Colorado Civil Rights Commission and the way that it processed claims brought against Jack Phillips, pointing to a perceived hostility towards religion. Handing down the majority opinion, Justice Anthony Kennedy wrote, “The Commission’s hostility was inconsistent with the First Amendment’s guarantee that our laws be applied in a manner that is neutral toward religion.” Justices Elena Kagan and Stephen Breyer joined the conservative majority in the ruling, while justices Sonia Sotomayor and Ruth Bader Ginsburg dissented.

In Masterpiece Cakeshop v. Colorado Civil Rights Commission, the Supreme Court considered the question of whether a business can refuse services to potential customers on the grounds of the business owner’s religious beliefs. In the case decided on Monday, June 4, 2018, a baker refused to bake a cake for a same-sex wedding.

“Emerging Consensus on LGBT Issues: Findings From the 2017 American Values Atlas” explores Americans’ attitudes on religion-based service refusals and finds the public strongly opposed: Six in ten (60 percent) Americans oppose allowing a small business owner in their state to refuse service to gay or lesbian people if doing so would violate their religious beliefs. Just one in three Americans (33 percent) support such a policy. Opposition to service refusals is so widespread, in fact, that close to half (45 percent) of Americans who oppose same-sex marriage are against allowing religiously based service refusals.

Attitudes Vary by Political Party
A majority (52 percent) of Republicans, and 59 percent of conservative Republicans, continue to favor allowing business owners to claim religious exemptions from serving gay and lesbian customers. More than three-quarters (76 percent) of Democrats and six in ten (60 percent) independents, by contrast, are opposed. They are joined by a majority of moderate (55 percent) and liberal (63 percent) Republicans. 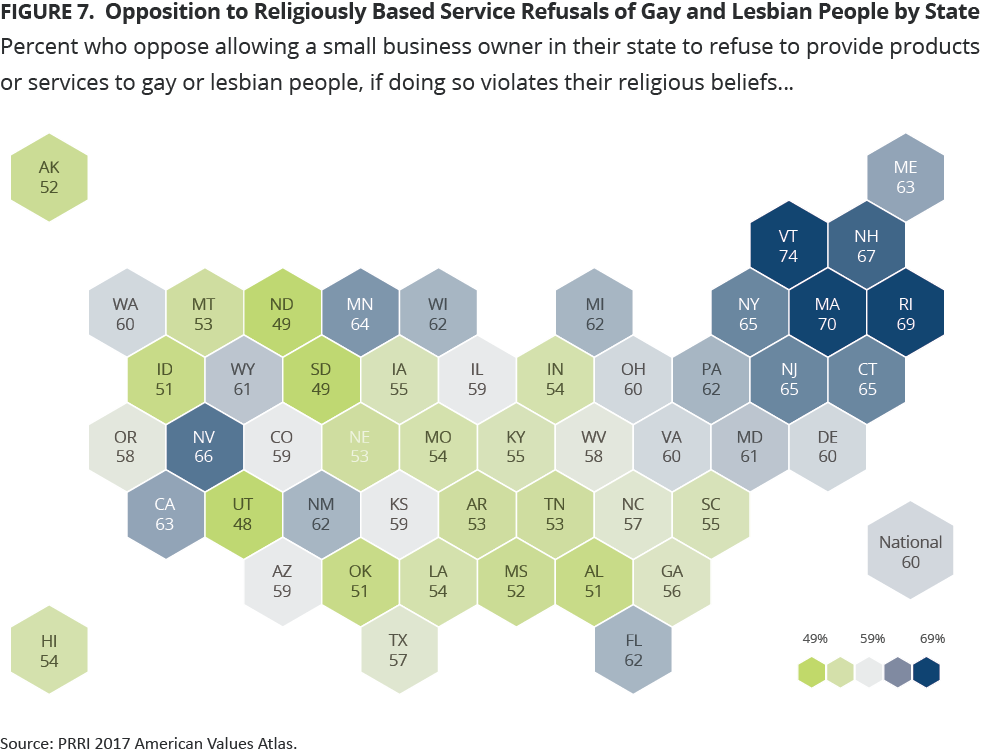 National Opposition to Service Refusals
Majorities of Americans in 47 states believe small business owners should not be allowed to refuse service to gay and lesbian people on religious grounds. Only in Utah (48 percent) and the Dakotas (49 percent, each) do fewer than half of the states’ residents oppose these refusals.

Only two major religious groups believe small business owners in their state should be allowed to refuse service to gay or lesbian people on religious grounds—white evangelical Protestants and Mormons. Just over half of the members in each group (53 percent) support service refusals.

Religiously Based Service Refusals for Wedding Based Businesses
However, in a separate 2017 survey, PRRI found Americans are somewhat more divided when asked specifically about providing wedding services—such as catering, flowers, and wedding cakes. A majority (53 percent) say that business owners should be required to provide these services to same-sex couples, while about four in ten (41 percent) say that they should be allowed to refuse if it violates their religious beliefs.

Religious affiliation is also a major dividing line on this issue. A majority of Hispanic Catholics (73 percent), the religiously unaffiliated (65 percent), black Protestants (56 percent), and white Catholics (55 percent) say business owners should be required to provide wedding services to same-sex couples. In contrast, about four in ten (44 percent) white mainline Protestants and less than three in ten (29 percent) white evangelical Protestants say the same. Almost two-thirds (65 percent) of white evangelical Protestants say that business owners should be allowed to refuse these services if it violates their religious beliefs.