June is LGBT Pride Month, and although the president has broken with tradition by not proclaiming the celebration, LGBT Americans will spend the month celebrating their cultural and political significance with parades, festivals, and ceremonies. To better understand the success of the LGBT movement, PRRI looks at how Americans’ social contact with members of the LGBT community impacts attitudes on same-sex marriage and what these trends mean for the future of the transgender movement.

As PRRI’s Daniel Cox notes in a column for FiveThirtyEight, increased contact with gay and lesbian individuals often eases general discomfort with homosexuality:

Social contact is a particularly effective way of reducing anti-gay sentiment because gay and lesbian identity is independent of the socio-economic, ethnic, racial, religious and regional divisions that separate Americans on other issues. While coming out is more complicated in certain parts of the country and within certain communities, gay and lesbian people are members of every social class, ethnicity, religion and race. White Americans are much more likely to have a close friend or family member who is gay than black, even though black Americans vastly outnumber gays and lesbian people. (I know these groups are not mutually exclusive.) Since the early 1990s, Americans collectively met and welcomed many more gay and lesbian people into their families and social circles.

Far fewer Americans report contact with transgender individuals—but there is still a marked increase from previous years. Roughly one in five (21 percent) report having a close friend or family member who is transgender, while more than three-quarters (77 percent) say they do not. However, the number of Americans who report having a transgender friend or family member has nearly doubled, from 11 percent in 2011 to 21 percent in 2017. Democrats and independents are more than twice as likely as Republicans to report regular social contact with a transgender person (22 percent vs. 27 percent vs. 11 percent, respectively). 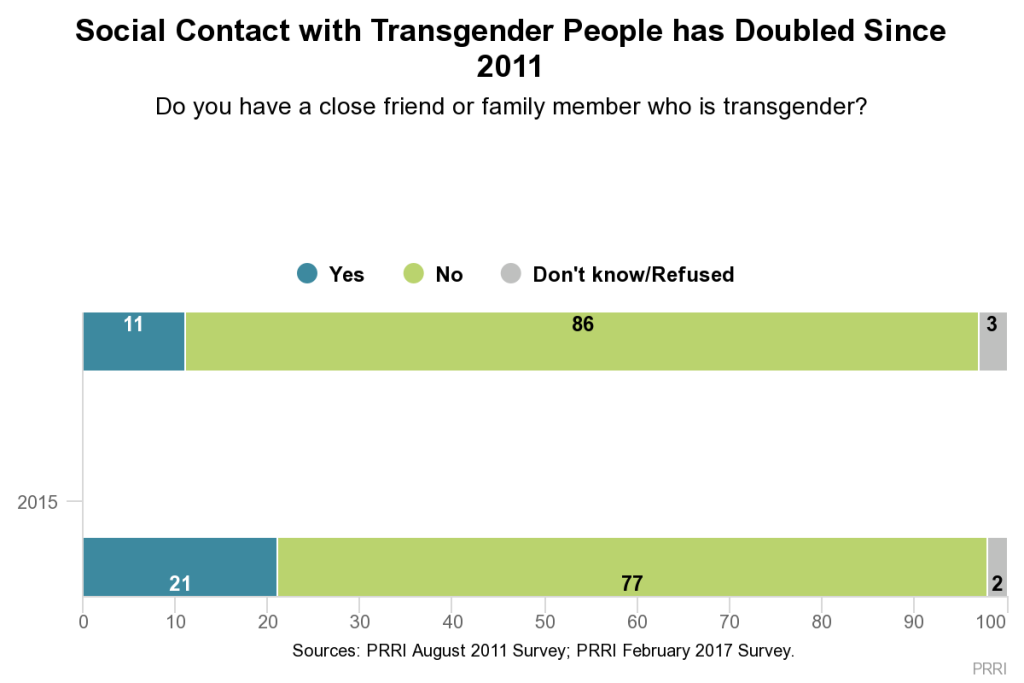 But as social contact increases, Americans report increasing knowledge of transgender identity. Despite having relatively little contact with transgender individuals on a regular basis, more than eight in ten (84 percent) Americans know what the term transgender means, compared to 11 percent who have heard the term but are not sure what it means, and 5 percent who have never heard the term before. Notably, Republicans are slightly more likely than Democrats and political independents to know what the term transgender means (88 percent vs. 84 percent vs. 83 percent, respectively).